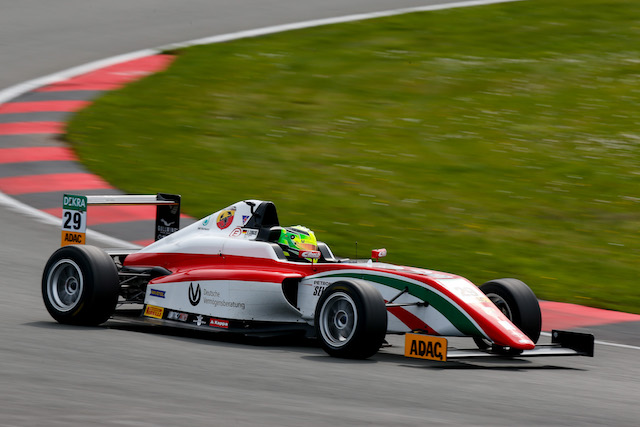 Mick Schumacher has won the third and final race of the ADAC F4 Championship weekend at?Oschersleben.

Starting from seventh on the reverse grid,?Schumacher made up place after place before taking the win by a good margin from his nearest rivals.

At the start, reverse pole sitter Juri Vips was able to comfortable lead the pack into the first corner, only for another multiple car crash to happen at Turn 1, bringing out the safety car. On the restart, Schumacher made several easy passes and when it was found that Vips had made a false start, he took the lead easily from front row starter Sophia Floersch?as Vips was handed a drive-through penalty.

Race 1 and 2 winner Joey?Mawson followed suit with Schumacher, making his way past?Floersch for second position, but Schumacher’s lead was too much and he settled for second at the chequered flag.

The battle for third was initially between Floersch and Job van Uitert?going into the final lap, but the pair made contact out of Turn 2. Van Uitert crashed?into the back of Floersch’s car, sending him flying into the wall and ripping the rear wing off of Floersch’s car for good measure.

Thomas Preining,?who was a quite far behind the pair at the time, inherited third, followed by his Lechner Racing team mate Michael?Waldherr in fourth.

Despite running the last lap without her rear wing attached to the car, Floersch was able to just hold onto fifth position, ahead of US Racing pair Kim-Luis Schramm and?Jannes Fittje in sixth and seventh.?Nicklas Nielsen took the rookie win again finishing eighth, with Felipe Drugovich and Kenneth Gulbrandsen rounding out the top ten.