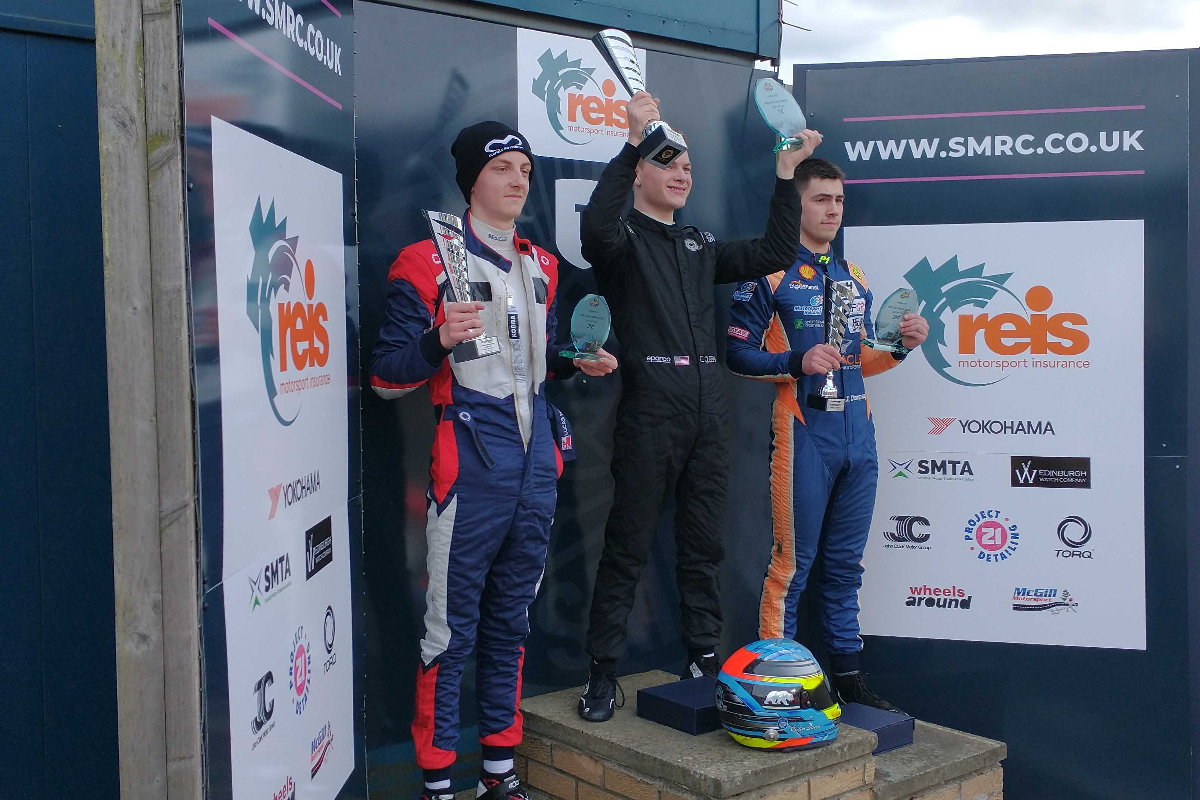 Colin Queen earned his first BRSCC National Formula Ford 1600 victory with a last-lap pass on Jordan Dempsey in race one at Knockhill.

The pair started on the front row, with championship leader Dempsey on pole, and Queen was immediately attacking. Their battle was paused after one lap, as Dempsey’s guesting Kevin Mills Racing team-mate Andrew Rackstraw went off and caused a safety car period.

A strong restart gave Dempsey a small gap, with the lead group of five that had formed on the opening lap now a group of four as B-M Racing’s Jamie Sharp challenged Ammonite Motorsport driver Queen for second at Taylor’s hairpin.

Sharp had got into third by passing Oldfield Motorsport’s Lucas Romanek at the start of lap two just before the safety car was summoned, with Romanek having also tried to get Queen at Taylor’s.

The benefit of the slipstream meant Romanek was fastest at the back of the lead quartet, but soon his attacks on Sharp meant the pair drifted from the closely matched top two.

On lap 13 of 19 the lead battle heated up, with Dempsey defending from Queen. Even more pressure was applied two laps later as lapped traffic got involved, and with three laps remaining Queen looked to the outside of Duffus Dip.

Dempsey kept his line, and did the same at Clark corner which allowed Queen to come alongside. The lead was retained into Taylor’s, but Dempsey went deep to do so and was then very defensive on exit.

Queen was kept at bay for another lap, but Dempsey was caught napping at McIntyre on the final tour and Queen sneaked down the inside for first place. Dempsey tried to come back through with a last-corner lunge, but the victory was Queen’s.

Sharp and Romanek’s fight was as close, with the latter frequently pressuring at Taylor’s. On lap 11 he finally got his move done, but after a full lap of side-by-side action the positions reversed on lap 14 as they ran out of room and Romanek went in the dirt after Duffus Dip.

Romanek overtook Sharp down the pit straight on lap 16, but there was more wheel-to-wheel racing before the position was actually settled. Sharp got by again on the penultimate lap, but Romanek took third on the last lap as Morgan Quinn closed in.

Davide Meloni made passes late on to rise to seventh in another close battle.

Drew Stewart was the surprised winner of the Scottish FFord classification down in 15th, as Michael Gray stopped with car issues on the penultimate lap.