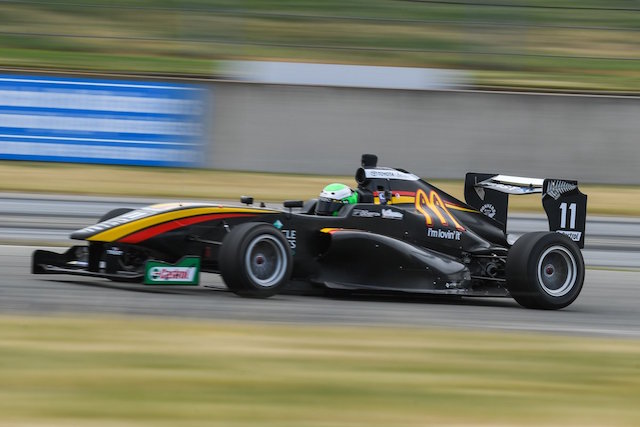 Taylor Cockerton become the second first-time local winner in as many races in the 2017 Toyota Racing Series with victory in the reverse-grid Ruapuna encounter.

Embarking on his second TRS campaign, Cockerton had already equalled his best 2016 result of fifth place during Saturday’s first race of the year.

That put him onto the front row for race two alongside Pedro Piquet, and he got the jump on the Brazilian at the start.

He led by a second after the first lap, and?soon almost doubled that advantage as Piquet?came under pressure from third-placed Thomas Randle.

Having managed to keep the Australian at bay, Piquet brought Cockerton’s lead down slightly to 1.5s, only for the MTEC Motorsport driver to post the fastest lap on the penultimate tour and finish 1.8s clear.

Randle was two tenths behind Piquet at the flag, and four seconds clear of Red Bull Junior Richard Verschoor, the second-row pair maintaining their starting positions.

Race one winner Marcus Armstrong got ahead of Jehan Daruvala for fifth on the first lap as the Indian slipped back to eighth, but the new Ferrari academy recruit couldn’t make significant inroads into Verschoor ahead.

He did leave Brendon Leitch behind, and Ferdinand Habsburg eventually found a way past Leitch for sixth in the closing stages.

Behind that, Daruvala and Enaam Ahmed clashed late on over eighth, with the former suffering a costly retirement in his title ambitions while the latter fell to 13th.

Daruvala is due to start the final race of the weekend from pole though, after beating Armstrong by 0.001s in second qualifying on Saturday morning.