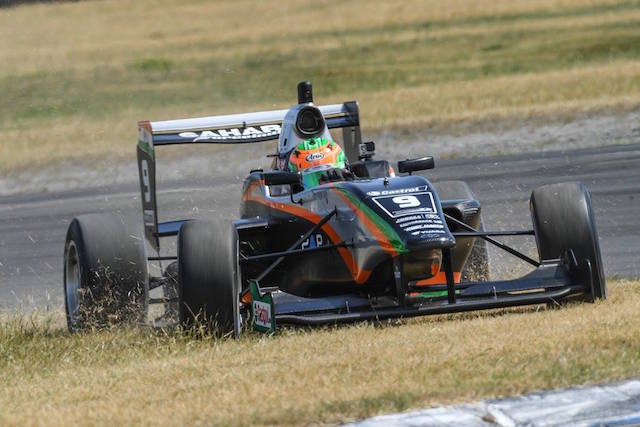 Having beaten Marcus Armstrong to pole by 0.001 seconds in second qualifying on Saturday, Force India protege Daruvala would lead?through multiple safety car periods and a red flag to retain the Lady Wigram Trophy he won in 2016.

He led Enaam Ahmed by a second after the first lap, and responded to back-to-back fastest laps from Ahmed to increase his lead to 2.2s prior to the first safety car intervention, required when Pro Mazda racer Nikita Lastochkin went off.

When Keyvan Andres’ spin out of a hard-earned eighth place at the restart was followed by other incidents, the race was suspended.

Race one winner Armstrong had fallen to ninth on the first lap with an off, then spun to the back on lap two, but despite pitting for a new front wing under the first safety car, he took the restart after the subsequent red flag in 10th place.

He would hit further trouble before the end however, tangling with Harry Hayek over eighth place to trigger the final interruption and enforce his retirement.

Daruvala was pursued closely by Ahmed at both of the final restarts, but held on to win by nine tenths of a second.

Pedro Piquet had been pushed from fourth to fifth by Ferdinand Habsburg at the first restart, but recovered well to snatch third from Verschoor on the final lap.

Nonetheless, Red Bull Junior Verschoor is the standings leader after the first weekend.

Following third in the first race, Verschoor was promoted from fourth to second in the race two results after winner Taylor Cockerton and second-placed Piquet were both penalised.

Cockerton had 10 seconds added to his time (putting him fourth) for being out of place at the start, while Piquet received a 30-second penalty (leaving him 17th) for his defence against Thomas Randle, who inherited the victory.

Australian Randle went on to finish fifth in race three ahead of Habsburg, putting him just three points behind Verschoor at the top of the standings.

Despite his race two non-finish after a tangle with Ahmed, Daruvala is third in the standings, 24 points behind Randle.

Only 13 of the 20 drivers finished the final race on the lead lap, with Brendon Leitch, Christian Hahn (who started 18th), Kory Enders and Hayek completing the top 10.