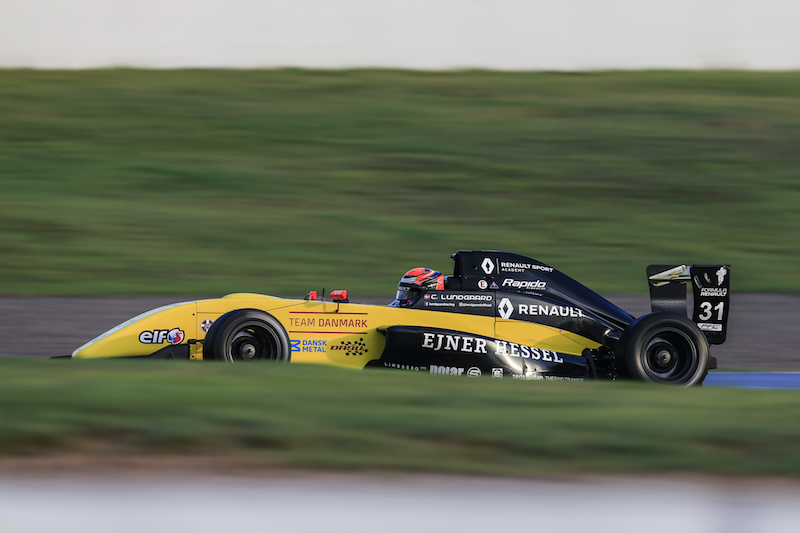 Christian Lundgaard won the first race of the Formula Renault Eurocup finale at Barcelona, just enough to take his title fight with Max Fewtrell down to the last race after his fellow Renault junior finished fourth.

From pole position, Lundgaard kept the lead at the start ahead of Logan Sargeant, while Fewtrell was demoted from third when Lorenzo Colombo went around his outside at the first corner.

The first half of the race was dominated by a safety car for various incidents at the start of the second lap, and at the restart, Lundgaard was forced to go defensive into Turn 1 against Sargeant.

The MP Motorsport driver then quickly pulled away however, finishing up 3.9 seconds clear to put his double Hockenheim retirement behind him and take his fourth win of the year.

With Yifei Ye falling out of contention despite his best attempts to recover from 14th on the grid, third would have been enough for Fewtrell to also put the title out of Lundgaard’s reach, but the R-ace GP driver could not regain the place from Colombo.

He does however take a 23.5-point lead over Lundgaard into Sunday’s decider, where ninth would be enough for him to clinch the crown. Lundgaard’s win allowed him to secure the rookie title over Sargeant.

Fifth went to Charles Milesi from ninth on the grid. Team-mate Victor Martins failing to get away from fifth on the formation lap handed him one place, before he gained another from Thomas Maxwell on lap one when the Australian went off at Turn 10 while side-by-side with Alexander Smolyar.

Maxwell then collided with compatriot Oscar Piastri at Turn 1 when the Arden driver tried a move on the inside, while there was a further collision behind between Nikita Volegov and Freek Schothorst that caused the safety car period – which was extended by Sami Taoufik spinning into the gravel exiting Turn 9 while weaving to keep heat in his tyres.

Milesi passed Smolyar into Turn 1 on the restart to get fifth.

Ye finished up eighth, two places short of where he needed to be to remain in title contention.

He took the position from Alex Peroni a lap after the restart and set off after seventh-placed Neil Verhagen.

Ye got down the inside of the Red Bull junior at the first corner with around three minutes to go, but went deep and had to give up the place. He didn’t however return to the track via the prescribed route around a bollard, and is under investigation as a result.

He was caught after that by Peroni and Raul Guzman, with the recovering Piastri joining the queue after passing Frank Bird on the outside of Turn 1.

A lap later, he ran over the back of Guzman’s car as they ran through Turn 2, giving Bird the final point.