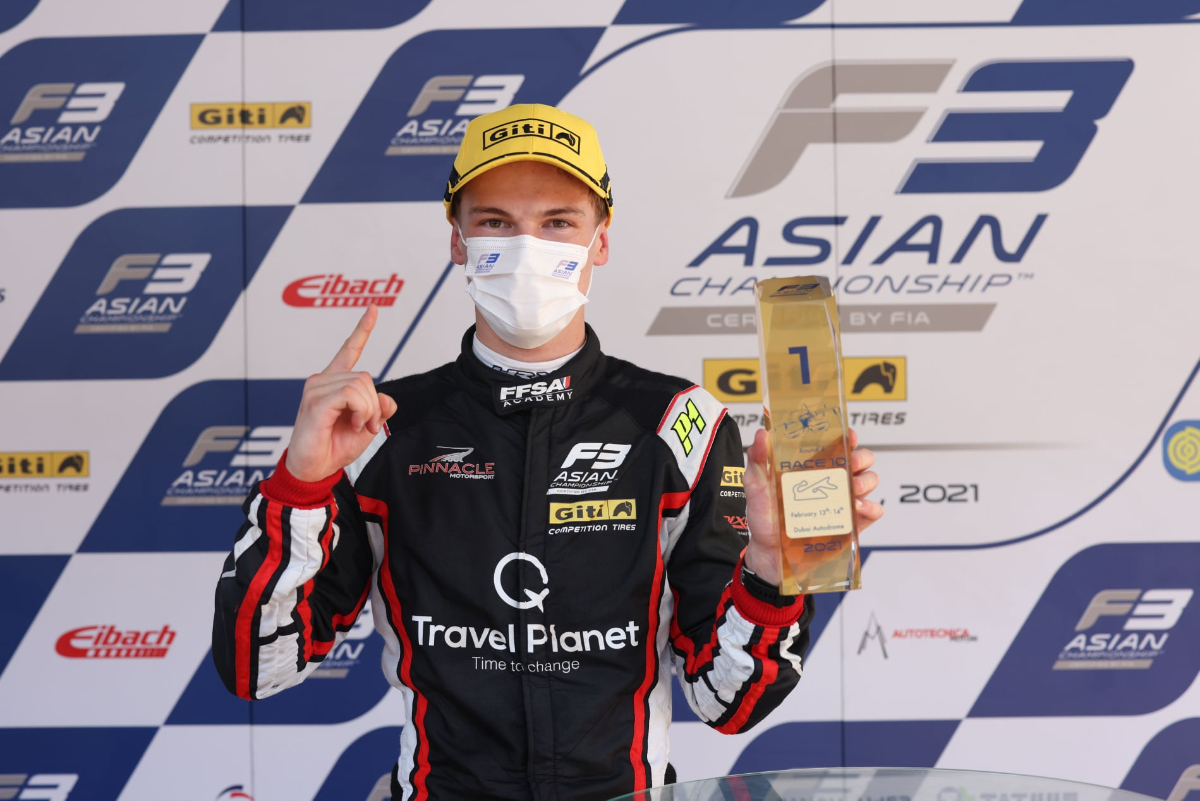 Asian Formula 3 points leader Pierre-Louis Chovet claimed another win at Dubai Autodrome as his title rivals hit trouble in the final race of the weekend.

Abu Dhabi Racing by Prema’s Guanyu Zhou started on pole, but the Chinese driver bogged down at the start – along with fellow front-row man Ayumu Iwasa of Hitech GP – and dropped down to 15th place.

Chovet immediately inherited the lead from his main title rival, with Zhou’s team-mate David Vidales jumping from sixth to second as they reached the first corner.

A gap was already emerging between Chovet and the chasing Vidales and Patrik Pasma (Evans GP) when on lap two Vidales’ team-mate Amna Al Qubaisi spun and then crashed out on her own at the back of the field.

The safety car was required, but Chovet could easily sprint away again when racing resumed before action came to a total halt when title rival Jehan Daruvala, who had started down the order, crashed with Alexandre Bardinon.

Race control decided to reset the clock to have the restarted race run 15 minutes, with Chovet leading the field and Zhou having recovered all the way back up to eighth.

After a lap behind the safety car the drivers got going, with BlackArts Racing’s Cem Bolukbasi plummeting down the order as Zhou cleared Hitech pair Roy Nissany and Reece Ushijima for sixth.

Those team-mates then started battling each other, but didn’t lose any further spots and with Ushijima ahead.

Hitech’s third driver Roman Stanek dropped to 10th behind BlackArts’ Rafael Villagomez, then on the last lap lost another two spots to the recovering Iwasa and Bolukbasi to finish outside of the points.

Zhou’s charge continued as he hunted down and passed Daruvala’s Mumbai Falcons team-mate Kush Maini and then Motorscape’s Roberto Faria to limit the damage to his title ambitions with a fourth place finish. Chovet’s title lead has extended to 32 points, and Daruvala is now 65 behind.