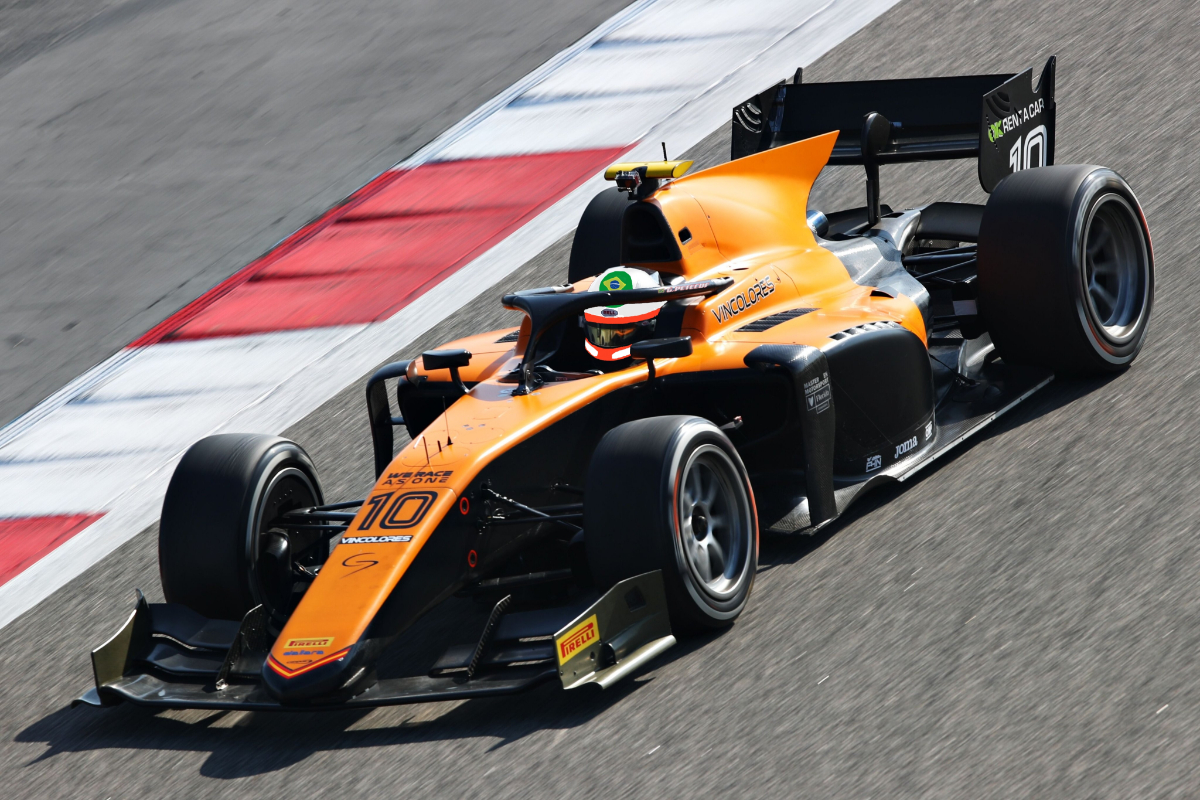 Artist’s impression of Petecof in a Campos F2 car

Not long before he passed away, Adrian Campos made a decision that he will sadly never get to see the results of. Gianluca Petecof’s career was at a sticking point, until Campos took a brave punt on him for 2021

At the end of the 2020 Formula Regional European Championship season, there was mixed emotions in the Vallelunga pitlane where Prema’s cars were parked. While Arthur Leclerc and Oliver Rasmussen were mulling over the 16-point gap with which they had ended the year behind team-mate Gianluca Petecof, Petecof himself was mulling over whether he would be racing in 2021.

The Brazilian had left the opening round as points leader, but just a week later his campaign was already on shaky ground as he revealed he did not have the budget to go beyond the first half of the season. At this point he still had the backing of the Ferrari Driver Academy, although that wasn’t financial, and oil company Shell. Neither will be with him this year.

Petecof extended his lead over the next two rounds, where he brought his season win tally up to its final total of four, then found new backers in late September that secured his Prema seat for the remaining events. While FREC raced until December, the FIA Formula 3 Championship had already wrapped up and was moving onto post-season tests. Petecof’s rivals found test berths there, with many 2021 line-ups then settled before the FREC finale, but he couldn’t even afford to look.

Obviously the pressure didn’t ease on Petecof, as his title fight with fellow Ferrari junior Leclerc ramped up and Prema’s pace advantage in the series started to break. It came down to the final race at a wet Vallelunga, where Petecof was crowned after finishing fifth while Leclerc spun out. Petecof picks up the story from there.

“So, championship finished. Happily we took the title home, and that was crucial for anything to happen in 2021 because of the financial problems going on during the season, even when I was still leading the championship,” he tells Formula Scout. 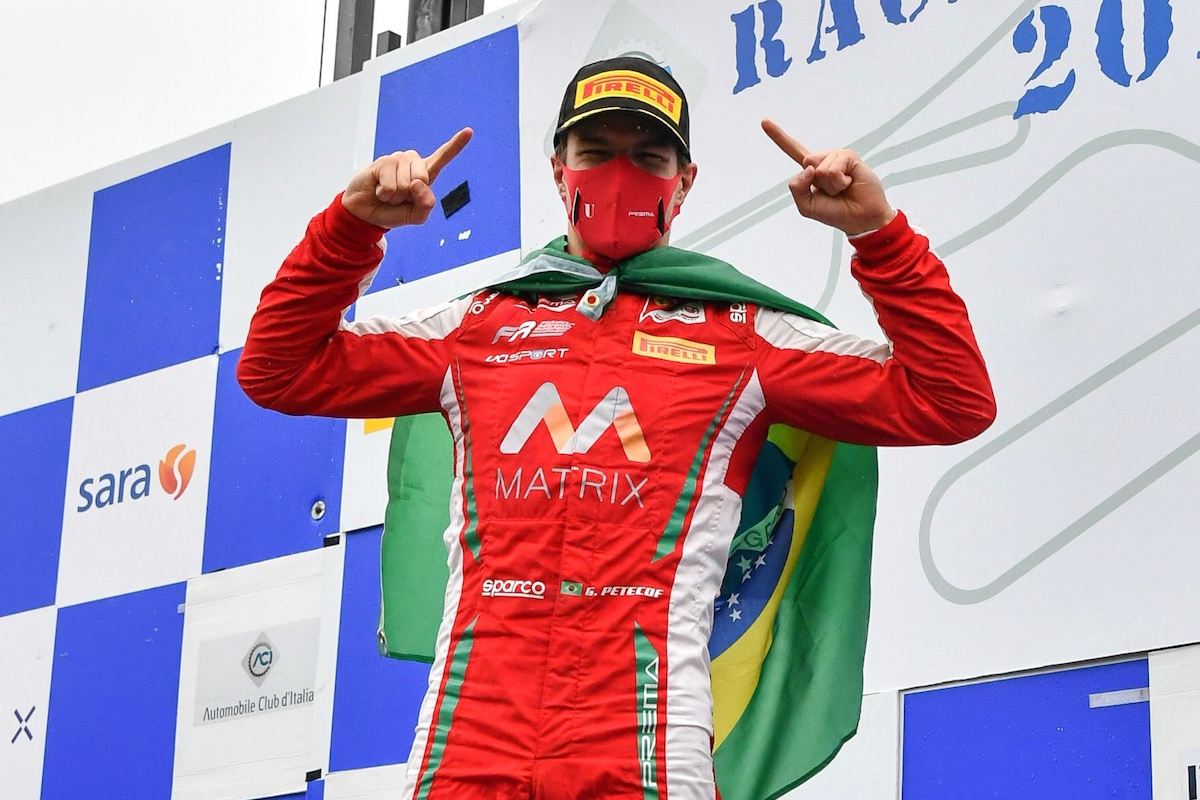 “So we won the title, and from there we started with the negotiations. All over the place.”

The first place to look was FIA F3, and a FREC team headed for new ownership then approached Petecof over the winter. At this point finding a seat in a higher category still looked slim with his limited funding, and then this month began with the news that Petecof would not be a Ferrari junior for 2021. At the same time though, his European racing career had been saved.

“After a couple of offers and counter-offers, I accepted me and FDA split, and then after that the talks with Campos Racing were already going on for Formula 2. And then the team basically gave me a great chance,” Petecof continues.

“They said ‘look, we know how financially difficult it is at the moment, but we would like to make this initial investment and sign you to the team’. They were very flexible giving us time to figure out the other side. Great chance, we had to take it, without thinking twice. And we’re here now.”

Sadly, as Petecof went through the processes of joining the team, founder and boss Adrian Campos passed away aged 60.

“It was really hard last few weeks. We had a couple of calls with him a couple of days before his passing, and right away it didn’t take long for us to build such a great relationship. He mentioned a lot of times what he did with Fernando Alonso at the beginning of Alonso’s career, when he made the same investment pretty much.

“He brought Fernando into the team, gave him a chance, and he made quite clear that the Campos objective has always been to give these unique opportunities to young drivers who need it and drivers who really deserve it. So that meant a lot to me. It meant a lot to know that one of his last wishes was to have me driving for his team.

“The first few days working with the team already here in Spain have been great. Everybody is quite motivated to honour him on track and do the best we can.” 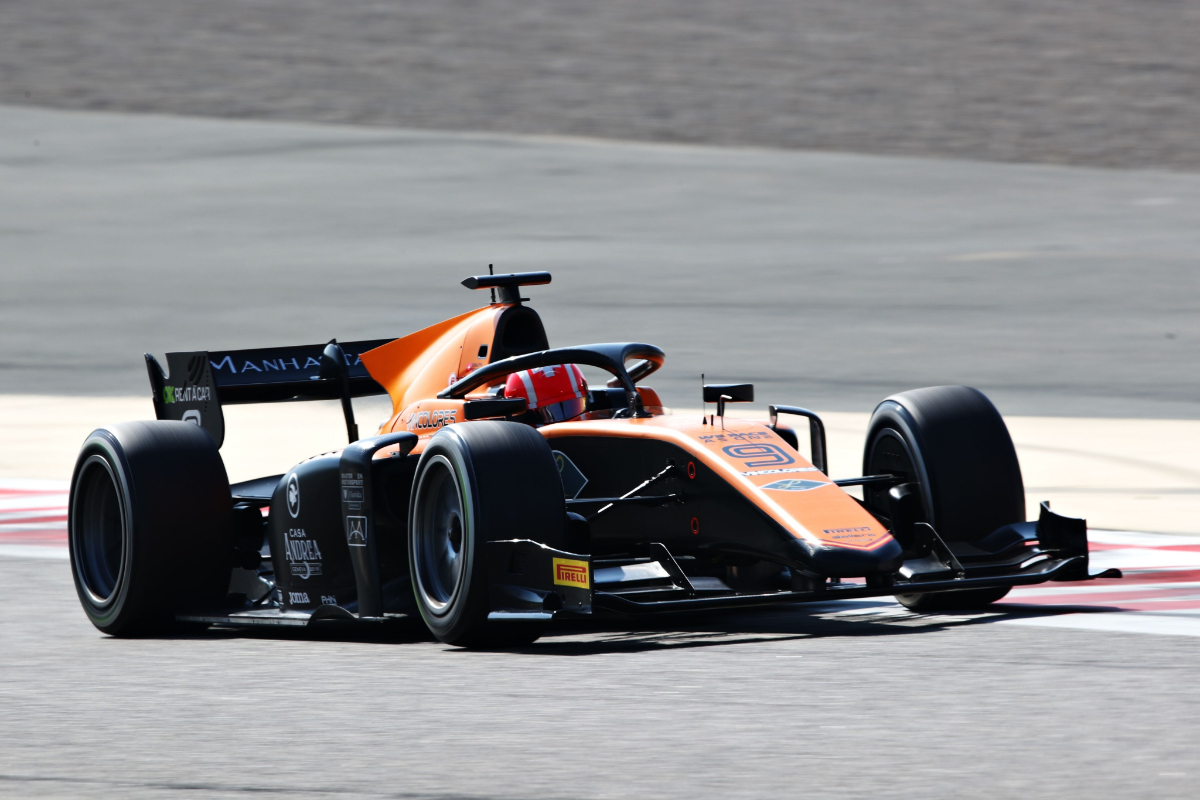 Campos launched the car racing careers of Alex Palou and David Vidales in recent years in addition to famed protege Alonso. While some may discredit a team that requires additional investment to fight at the front for bringing in two drivers on limited budgets, it’s a brave choice if anything and one that Petecof and team-mate Ralph Boschung (pictured above) will be looking to honour.

Petecof’s first mileage in the Dallara F2 2018 will come in the Bahrain pre-season test on March 9-11, and his series debut will be at the same circuit two weeks later. There’s hopes that he will be able to sample an old GP2 car before then to help him acclimatise to high-downforce machinery, with his leap to F2 being the biggest in the series since Artem Markelov came from German F3 in 2014.

He will be engineered by the returning Jose Fontestad, who worked for Campos in Spanish F3 in the late 2000s before becoming a GP2/F2 race engineer at DAMS, working with Pierre Gasly and Oliver Rowland, and then Arden and HWA Racelab. Fontestad’s experience will be crucial not only in Petecof’s results but in Campos’s 2021 engineering direction.

“I think two key sentences that I’ve been keeping with myself in this change is number one: opportunities are there to be taken. If you don’t grab what’s given to you, especially talking about something so fantastic given the situation that we were in, it would have been crazy,” Petecof adds.

“If somebody asks me ‘what offers did you have?’ and I said ‘F2, turned it down’, it sounds even crazier than going from Regional F2 to F2. And also things are difficult, that’s no excuse. You can make your way around it. 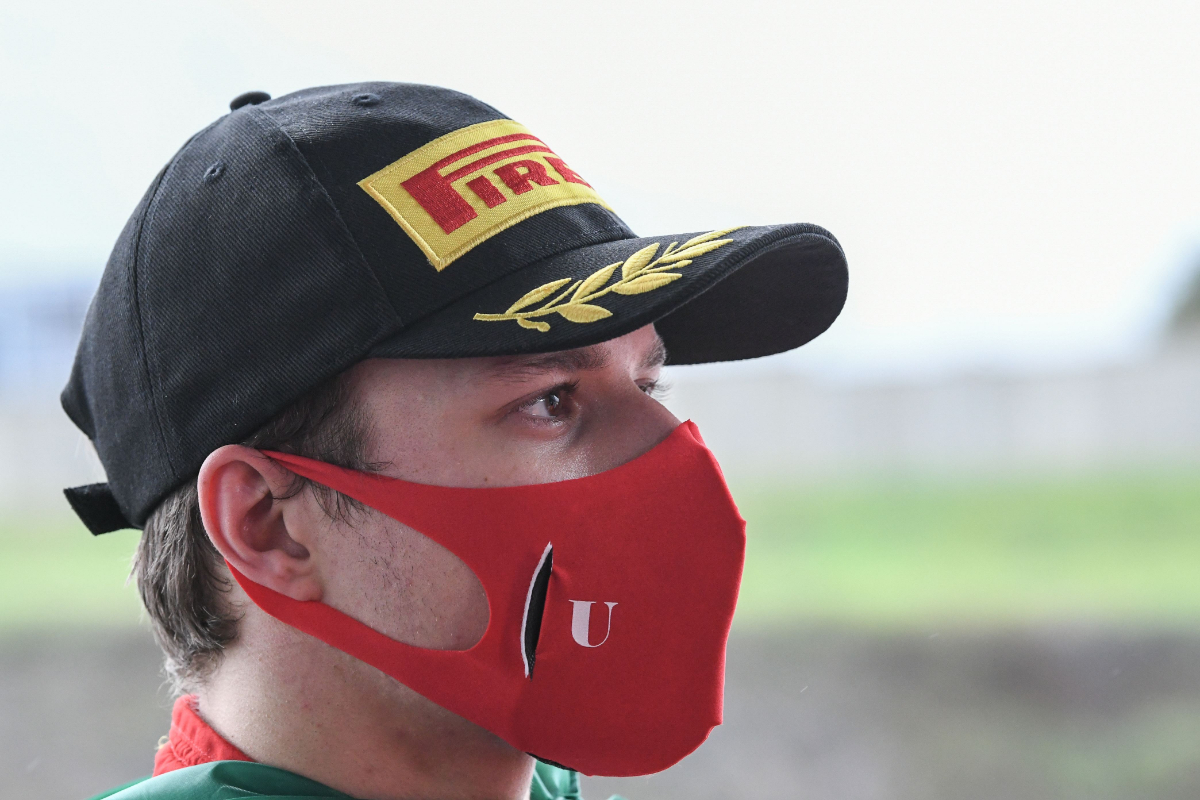 “I’m just excited for it. It is going to be a big leap, but I’m completely ready for it. I don’t see why I cannot adapt, and I cannot arrive to the races this year and deliver us some good results. And the main key that I’m keeping with myself, and the main goal is just surprising people. Like maybe I did already by simply announcing that I’m doing F2, but of course on track I’m not there to just take part, I’m there to achieve something and to bring the team to where it belongs.”

It arguably would have been an even bigger surprise had the 18-year-old stayed on in FREC, given the reigning champion of FIA-certified junior single-seater series are normally barred from returning. But with FREC taking on a new look and adopting Renault engines this year, the organising team seemed to be as accommodating as Campos was with Petecof’s desire to stay in Europe.

“I received an offer about a project in FREC,” admits Petecof. “I could have added something to the team, it was a great offer, great people, which I’m also really thankful for them. When you see these kinds of offers, with people that trust in you and give you this trust in helping them in some kind of way and representing the project. It was also one of our real possibilities.

“Something that if we didn’t find anything in F3 or F2, could have been a reality as well.

“I was quite excited to get to that different mentality. You know, a new environment where I wasn’t coming in as a paying driver. It’s just a [different] step, I would have been the current champion and helping the team move forward, more of a job.

“It was spoken with the organisation of the championship, and it was agreed if in fact the opportunity was coming to reality, I would have been allowed to participate again.

“We had a very blind view of the future about any possible chances, and even though this year it didn’t come to fruition, nothing stops us from collaborating in the future on maybe a different category or even as some involvement with the team.” 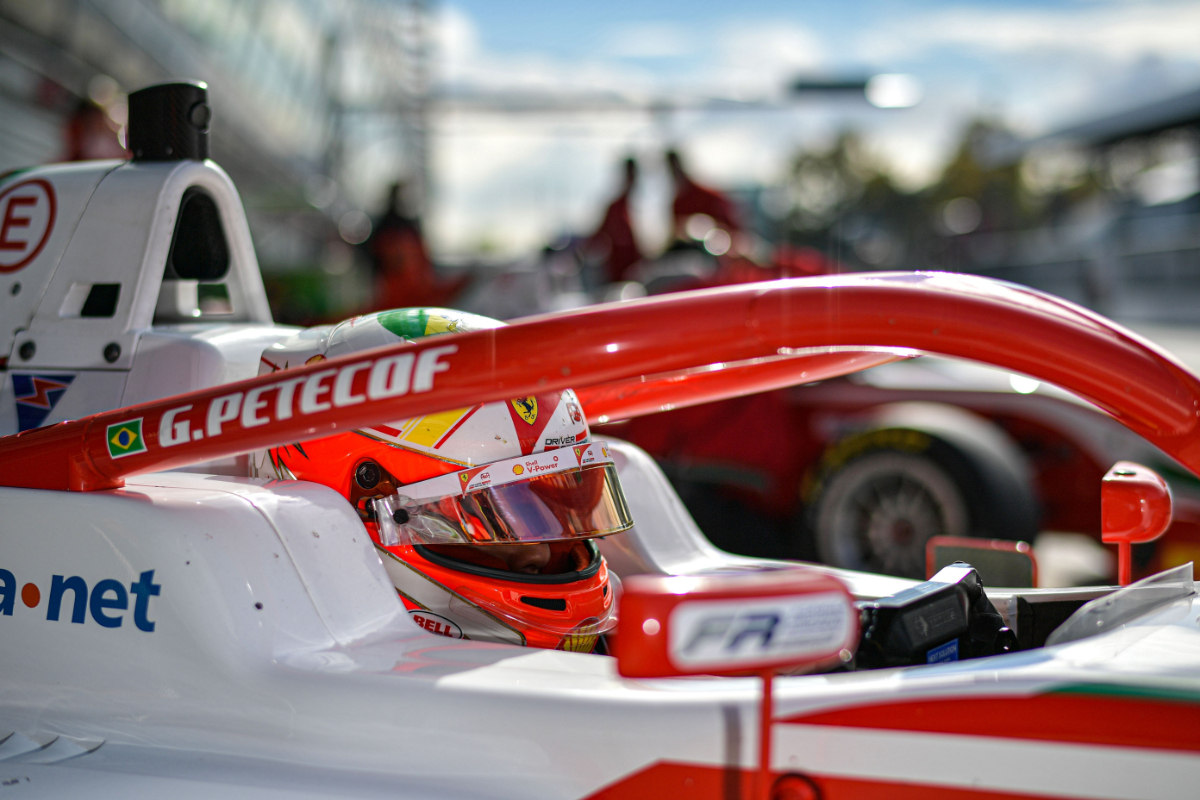 A return to America, where Petecof lived before earning his place in the FDA in 2017 and going to Europe to compete in Italian Formula 4, was a back-up plan that wasn’t needed after the offers in FREC (understood to be with M2 Competition) and then F2.

He’s now based in Spain until pre-season testing, working with Campos and learning the F2 car in the team’s simulator.

“I think now a lot has changed in the terms of my career strategy. Not being a part of Ferrari anymore, of course it opens up some things now that we are not linked to anyone officially. We can explore new opportunities that may come in the future, but for now I’m just really excited and looking forward to start the work with Campos.

“For sure our plan was to anticipate things a bit more, which was impossible, but everything happened for a reason and really grateful for the opportunity that appeared, and I’m not sure if I would have had this such a nice opportunity if things had gone a different way.”