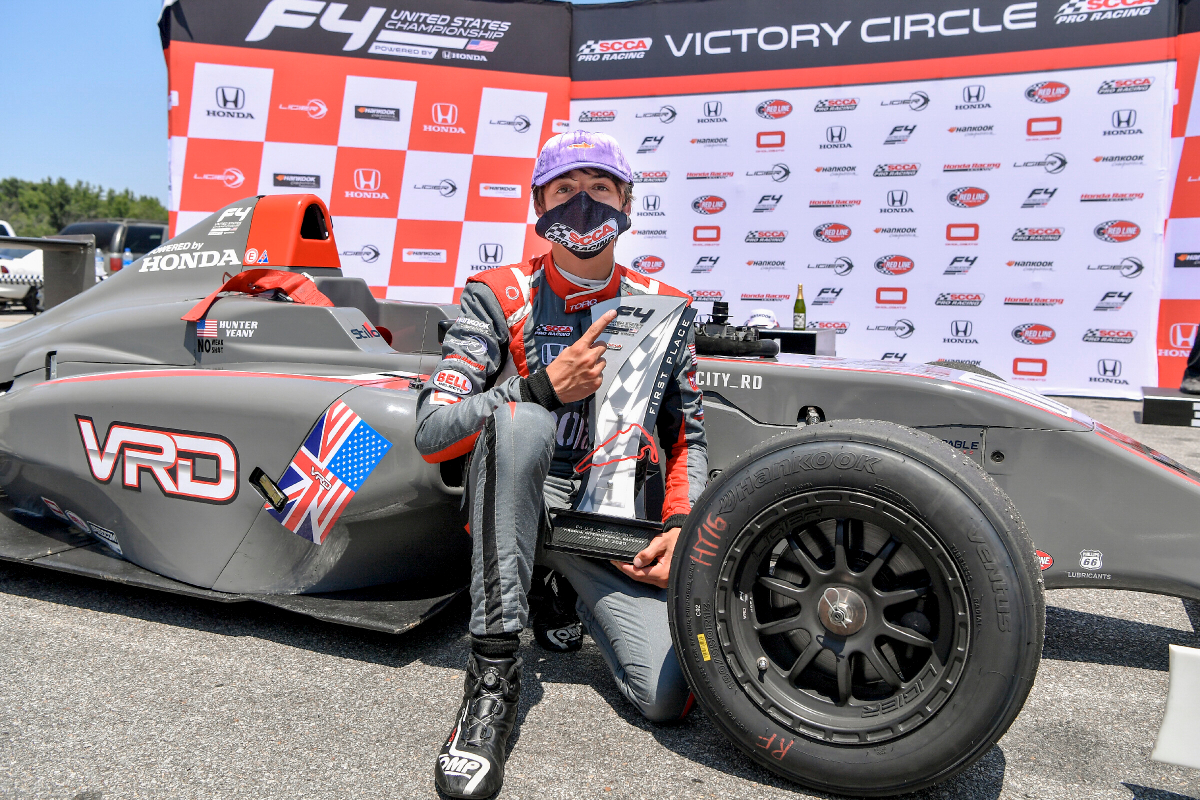 The youngest ever FIA F4 champion has his sights set on two titles in year two of his car racing career in the USA, as 15-year-old Hunter Yeany shares his plans to make it to F1 in the latest Formula Scout Podcast

Ten wins and 19 podiums from his first 20 races in single-seaters really marked out Hunter Yeany last year as a driver to watch. He built on that success by stepping up to Formula Regional Americas, with the United States F4 title already won with a round to spare as a rookie, and claimed a fourth place from just his third start in Regional Formula 3 equipment.

Yeany started karting just over six years ago, initially indoors, then moved to national-level competition as he approached his 12th birthday. Once he had arrived on the scene, it didn’t take long for him to forge the links that would take him to cars.

“I met [Velocity Racing Development co-owner] Dan Mitchell, he’s my engineer and manager now, at the USA SuperNationals in 2017. He’s been with me from the start of my car career,” Yeany tells Formula Scout.

“Him and my dad put together a programme, so that way I could be ready for when I got to the US F4 championship, which obviously worked pretty well.”

While Yeany moved up to X30 Junior karts in 2019, he actually spent most of the year as development driver for the Velocity team in FRegional and F4. In addition to a fly-on-the-wall role at all races, he also get several F4 tests of his own each month and runs in the F3 car.

His race debut with Velocity would eventually come in January 2020 when, aged 14, he entered F4 Western Winter Series’ opening round at the Auto Club Speedway roval.

“I’ve got to say it was one of the most fun things I’ve ever done. I went there, and then Sonoma wouldn’t let me race because I was too young, so the next winter series I did was the YACademy Winter Series [at Homestead-Miami Speedway], that was my third race, and that was my first ever race win in any motorsports,” Yeany says. 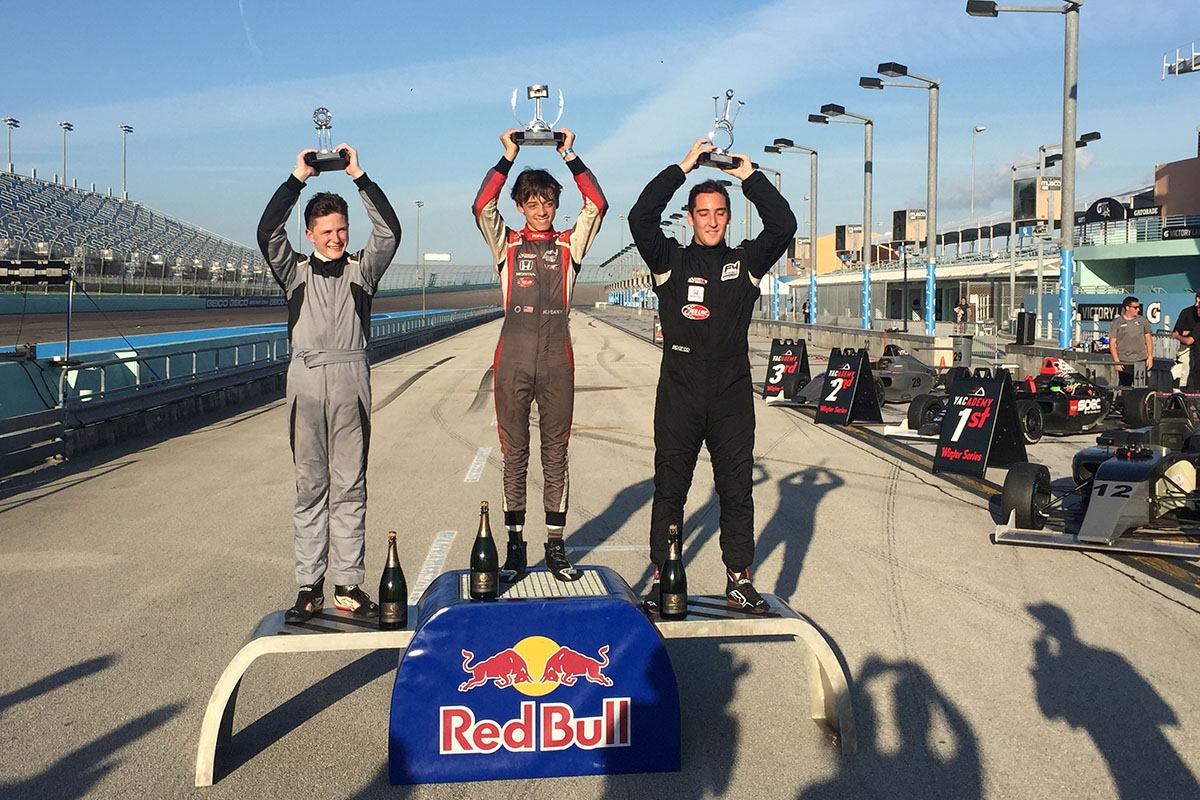 “But I wasn’t really against all the US F4 teams at the same time, so I was still kind of like ‘I wonder how I’ll do when I get to the real championship’ and it turned out pretty well.”

Across the two winter series events, Yeany learned rolling and standing starts, and took his first three wins in the Crawford F4-16 car. He was still 14 when the US F4 season was to begin, although the series had a waiver organised to allow him to compete under-age, but in the end it didn’t matter as the coronavirus pandemic delayed the start of racing to late June.

Mid-Ohio hosted round one, and it was a circuit Yeany knew from an F3 test. He left with a win and a second against 32 other cars, but rain meant more running behind the pace car – and learning the protocols of that – than actual racing.

Round two at Virginia was simpler, and Yeany picked up two wins and the points lead on a circuit he loves due to its fast and flowing layout. The many straights made it hard at the front of the field though.

“I had to learn how to stretch a lead. It was kind of hard at Virginia because it’s a really big drafting track and there’s a lot of straightaways so it’s pretty easy for people to stay with you.

“I feel like from the beginning of the year to the end of the year, I gathered a lot of momentum, starting with Virginia. After I was at Virginia, since Mid-Ohio was kind of an awkward weekend, and I learned that I could win races and how to win races.”

Another two wins came at Barber Motorsports Park’s quadruple-header, then Yeany swept a triple win at Sebring. The title was claimed at Homestead, and Velocity handed Yeany his FRegional line-up for the Circuit of the Americas season finale.

The 2019 FRegional Americas champion Dakota Dickerson had been on hand all year coaching Yeany, who estimates he racked up well over 100 test days in the F3 car from the age of 14 before getting to drive it competitively last October. Did he expect to at the front straight away? “Yes,” Yeany confirms. 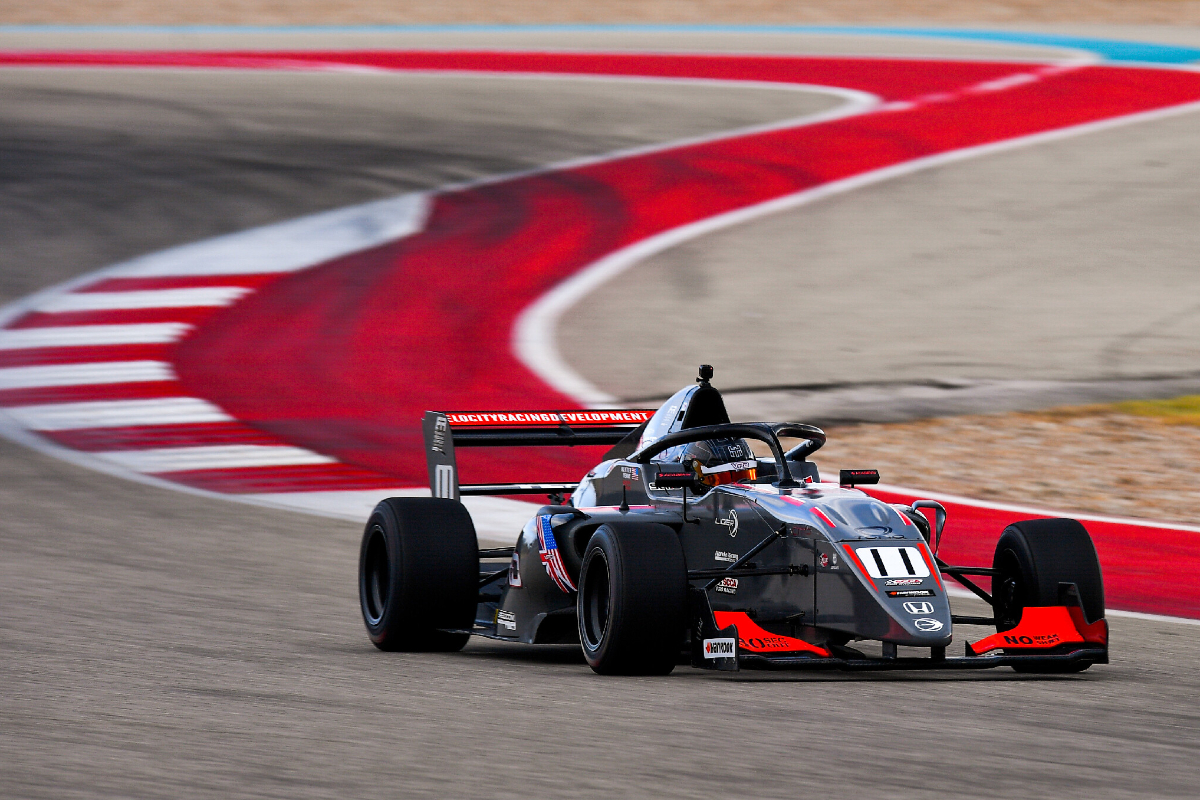 “I was aiming for [champion] Linus Lundqvist. Unfortunately we didn’t do very well in qualifying, which meant I had to start pretty close to the back. But I made my way up through the weekend and I thought it was a really good learning weekend because by the end in the last race I made it up to fourth and he was only kind of about six seconds ahead of me.”

Yeany’s testing had been extensive, and thorough, under the eye of Dickerson.

“It was all about learning the turbo spool, and learning how to manage the tyres,” Yeany adds.

“One thing that was really new for me when I went into that last race was the aerowash. Because in F4 there wasn’t a lot of aerowash. But since the F3 has a lot more aero, it was kind of hard to follow people.”

As reigning US F4 champion, Yeany will be stepping up to FRegional full-time with VRD in 2021, but is also racing part-time in Indy Pro 2000.

“I started jumping from car to car, doing that practice back in June of last year,” Yeany says of his preparations for the double programme.

“It was really hard at first, but as I just kept going from F4 to F3, and then USF2000 to F3, and just mixing around all the cars it’s been getting a lot easier for me – and adapting to the lightness of the USF2000 and the IP2000 compared to the weight of the F4 and the power of the F3.”

Yeany will be facing street circuits for the first time in IP2000, another new challenge to adapt to.

“Sebring was a good place for that to learn, just because of how bumpy it is. Also on the simulator, I do run some of the street courses on there. They’re not the exact same street courses. St. Pete is going to be one of our races this year, but that’s not on the sim, so I just run Long Beach and Detroit GP to practice for that. 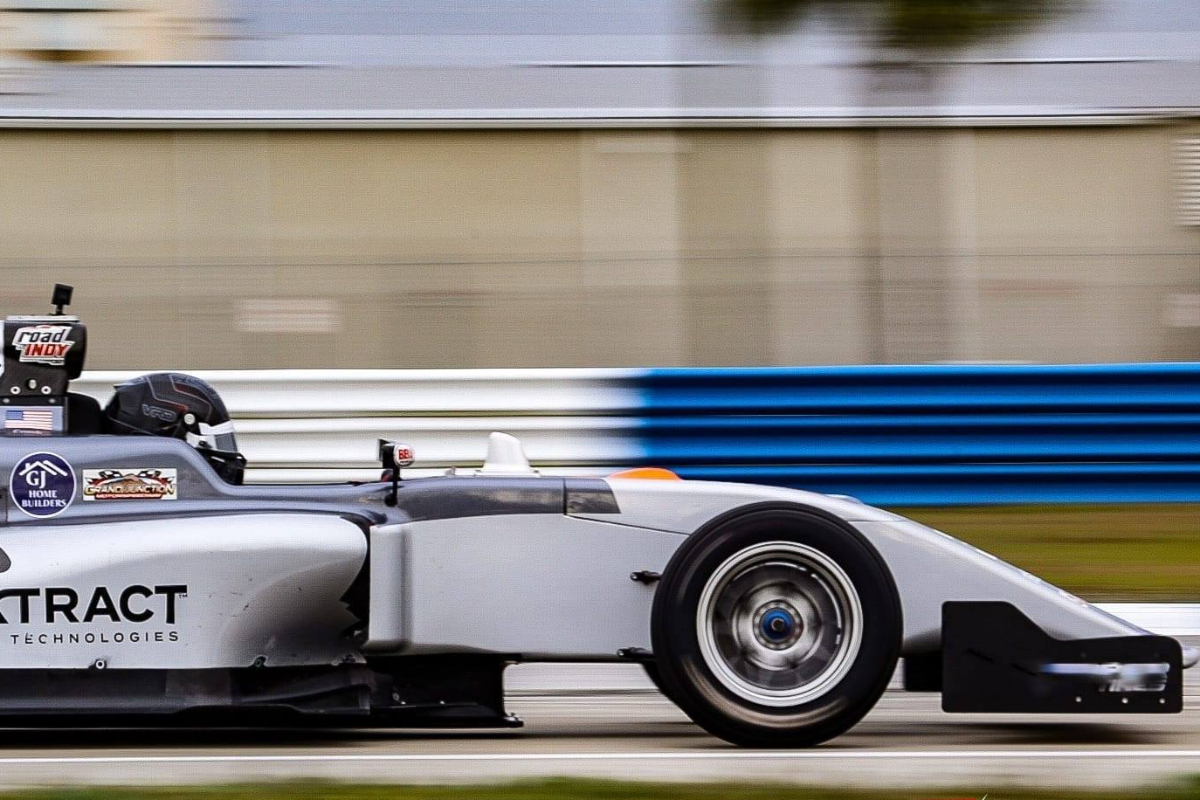 “I plan to win both series in the first year. Just try to get it done and over with as fast as I can. So I can go overseas and race against some of you guys [in Europe].”

Missing IP2000 rounds will not aid a title challenge there, and a funded Indy Lights seat is the prize for the champion. But Yeany’s eyes are firmly set instead on the FIA F3 Championship for 2022.

“I plan in 2022 to go to FIA F3 with maybe Prema, ART or Trident. My goal is hopefully to win that the first year too.

Yeany’s already made a mark in Europe, long before his F4 debut, having run a testing programme with Carlin in 2019 in its BRDC British F3 car alongside compatriot Kaylen Frederick – the series’ 2020 champion .

And while leaving America means leaving VRD, Yeany plans to take some of the team’s experience with him to Europe in the form of Mitchell, who used to be a race engineer and then a team manager for Fortec Motorsports in British F3.

“I really just want Dan Mitchell to come over with me, and make sure the car’s are all good. And just help me out there, because he knows what it’s like to race [in Europe].”

Yeany will be starting his 2021 FRegional efforts next month in the series’ Winter Cup at Sebring, which will be “more focused on testing and practice” and getting used to the rough street circuit-like surface while also including a return to racing. 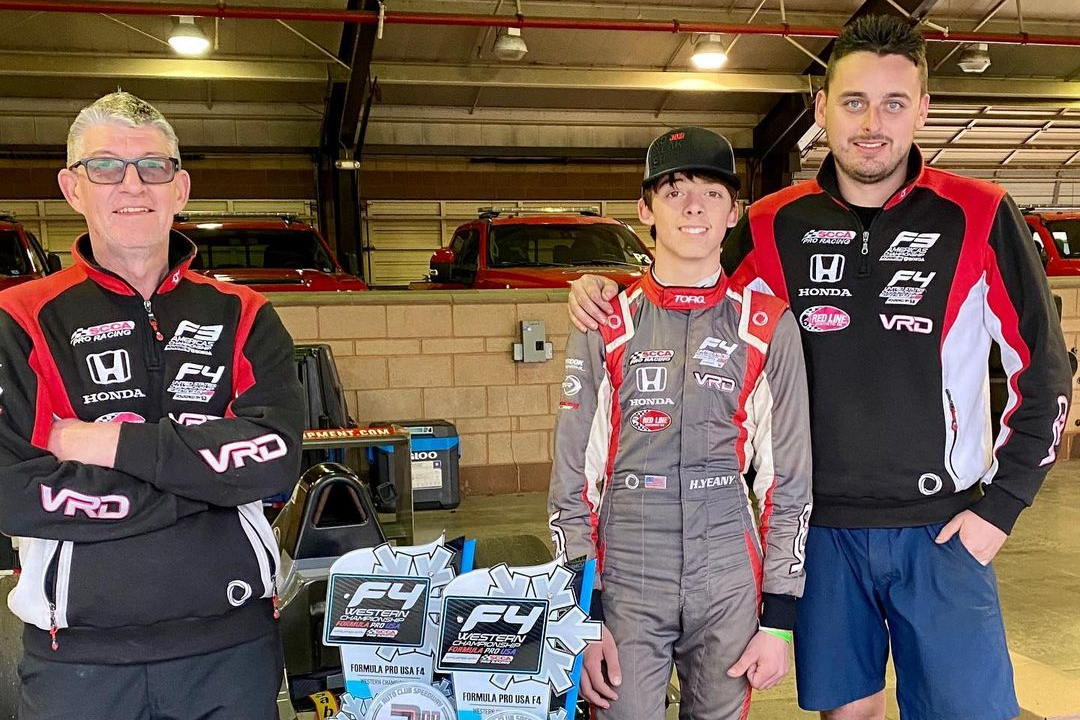 You can also listen to the interview with Yeany in podcast form below, or on Breaker, Google Podcasts, Overcast, Pocket Casts, RadioPublic, Castbox, Apple Podcasts and Spotify.