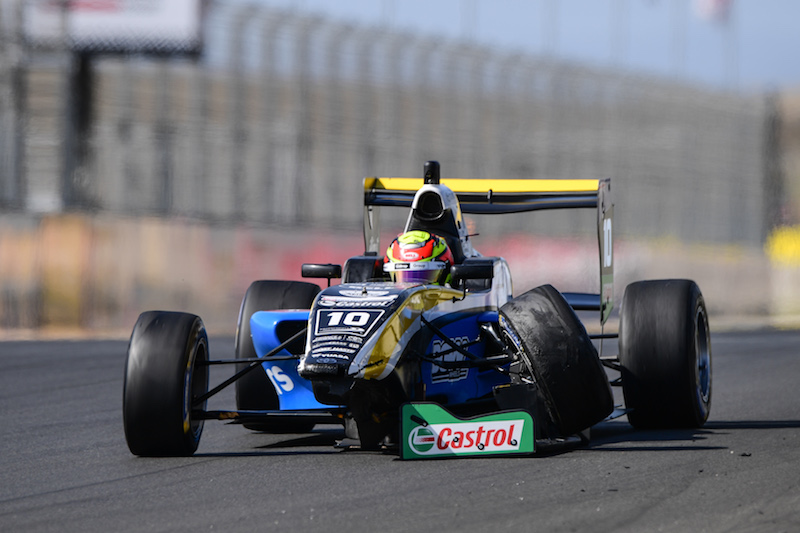 A two lap dash to the finish was reduced to a few yards when race long leader Cameron Das and Liam Lawson collided on the final restart of a hectic opening Toyota Racing Series race at Hampton Downs.

The winner of the race – rescheduled from last weekend’s wind-hit Teretonga round – is still to be declared.

Das and Lawson moved into first and second on the opening lap and had retained the positions through multiple safety car restarts and a brief red flag period, brought out when Esteban Muth beached his car at the end of lap one.

Racing was stopped again when Calan Williams span into the wall, suffering heavy damage to the front and rear wing of his MTEC Motorsport run car, and brought out the red flags for a second time.

The race restarted with just two laps remaining, but the field hadn?t even made it across the start finish line before the chaos resumed. Lawson collided with Das, sending the American racer into a spin and bringing out the red flags once again.

In a race where even the safety car suffered a puncture, Artem Petrov crossed the line first before the third red flag ended the race, having passed Marcus Armstrong as the championship leader tried to avoid the accident ahead, though no official result is expected until Saturday morning.

Drama started from the off. Kazuto Kotaka started from pole but immediately came under pressure from fellow front row starter Lucas Auer. Auer made a move around the outside and touched Kotaka, sending the MTEC Motorsport driver into a spin and forcing him to pit for a new nose cone.

Auer came to a stop on the grass but was able to continue and joined the back of the field under the first red flag period. His race didn?t get much better, though, as he then spun at the restart, damaging his front wing.

Though he was towed to the pits, he was able to get going again and joined the back of the field when the race was red flagged to recover Williams? car.

Petr Ptacek was running fifth at the final restart, ahead of Brendon Leitch, who ran over the grass on the opening lap and fell to the back of the field.

Dev Gore was seventh, ahead of Petru Florescu, who started from the back of the grid. Jackson Walls and Parker Locke rounded out the top 10.