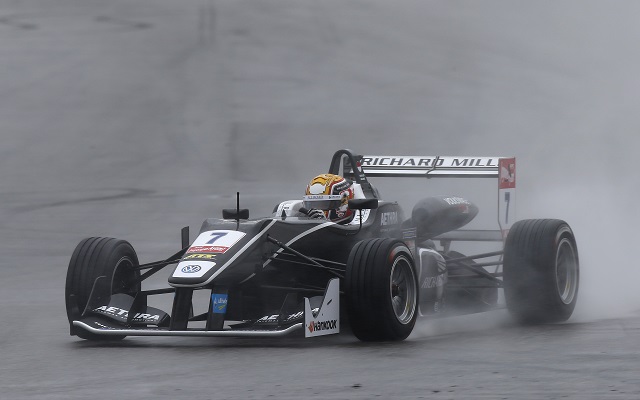 Charles Leclerc extended his FIA F3 European Championship lead with victory in torrential rain in the opening race of the weekend at the Norisring.

Leclerc led from pole position, with the field released after three laps behind the safety car.

Alex Albon took second away from Maximilian Gunther at the first corner and he and Leclerc began to pull away from the rest.

Albon however would later drop to fifth when he ran deep at Turn 1, needing to find reverse in order to get going again after stopping just short of the tyre barriers. The Lotus F1 junior starts the weekend’s remaining two races from pole.

As Gunther was passed by title contenders Antonio Giovinazzi and Felix Rosenqvist, Leclerc opened up an eight-second lead before the safety car appeared.

It was required after Spa double winner Jake Dennis – who began the race as Leclerc’s nearest rival – parked up at the end of the main straight minus his front wing, which was then collected by Giovinazzi as the Italian went off line to get slowed down for the safety car ahead.

While Giovinazzi used the kerb at Turn 1 to eventually shed the debris, the safety car remained out on track until the clock ran down.

Leclerc therefore picked up his fourth win of the season, ahead of Giovinazzi and Rosenqvist.

Gunther took fourth ahead of Albon and his Signature team-mate Dorian Boccolacci. The top 10 was completed by Gustavo Menezes, Lance Stroll, Markus Pommer and George Russell.