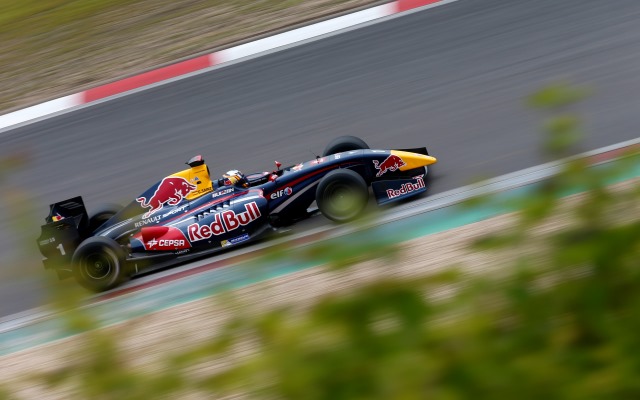 Carlos Sainz held on under heavy rain in the last moments to win the first Formula Renault 3.5 race at the Nurburgring.

After keeping the lead from pole position at the start, Sainz had to deal with the threat of Oliver Rowland at first, with the Briton able to stay within one second of the championship leader for several laps.

Sainz then began to extend his advantage over Rowland, which gave him a comfortable margin when it began raining at the end of the lap in the closing minutes. After crawling through the chicane and the final corner for the last time in the now-treacherous conditions, Sainz took a 4.1 second win.

Rowland suddenly fell back towards third-placed Roberto Merhi in the final laps, and the Zeta driver was able to get past to claim a Spanish one-two when Rowland’s car slowed on the pits straight heading onto the last lap.

That also allowed Rowland’s team-mate Sergey Sirotkin to get past at turn two, but the British driver was able to get back up to speed to hold on to fourth. After falling behind Merhi at the start, Sirotkin was pressuring his fellow Moscow winner until the conditions worsened.

Marlon Stockinger scored his best result since Aragon in fifth place ahead of Mattias Laine and Pietro Fantin, while Oscar Tunjo beat Zoel Amberg and Marco Sorensen to eighth.

After starting down in 17th, Pierre Gasly found himself in that very same position for a large chunk of the race, stuck behind Roman Mavlanov. He eventually managed to get down the inside of the Russian at turn one but ran deep. The pair then ran side-by-side into turn two, with Mavlanov failing to give Gasly enough space on the inside and causing contact that spun both around.

A visit to the pits for a new front wing left Gasly finishing 20th, although Rowland’s woes late on mean the Frenchman retains second in the standings, albeit now 58 points adrift of Sainz.