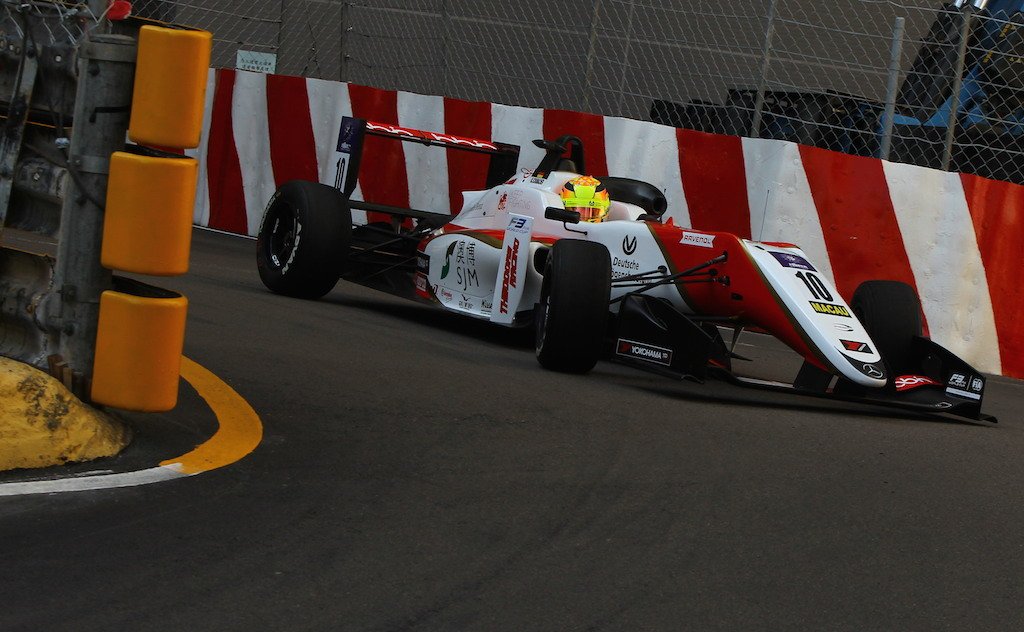 Mick Schumacher has the opportunity to become the third member of his family to win the prestigious Macau Grand Prix this weekend, but he’ll face stiff competition from one of the most closely?matched grids in recent years.

As well as 15 of European Formula 3’s best, there’ll be seven drivers from Japanese F3, one from Asia, and two returning stars from the DTM and Super Formula. We can’t say for sure what this all-star cast will go on to do, let alone this weekend, but with the power of hindsight we can review what was required for the first two Schumacher victories, and what chances the European F3 dominator of 2018 has of repeating those feats.

Hakkinen came to Macau as British F3 champion, while Schumacher had dominated the German series with long-time career supporter Willi Weber’s WTS Racing team. The pair locked horns a month prior to Macau with Hakkinen upstaging Schumacher in a one-off German F3 appearance at Hockenheim.

The pair were the clear class of the field that year, despite it featuring future F1 race-winners and 1990s CART legend Alex Zanardi. Macau’s format in 1990 consisted of two races, with the overall winner been decided on aggregate. 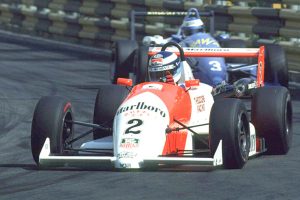 Schumacher had other ideas, slipstreaming past Hakkinen early on. The Finn was able to keep close to the back of Schumacher and heading onto the penultimate lap, he was still on course for the overall victory thanks to his heat one win.

It all fell apart for Hakkinen though, with a misjudged attempted pass with just one lap to go. He ducked out of the slipstream of Schumacher to the right, but Schumacher went the same way. Hakkinen clipped the rear of the leader’s car and was sent into the wall, immediately?ending his race and chances of Macau glory. Schumacher suffered rear wing damage but was able to continue to seal the heat and overall victory, the first for a German. Runner-up Mika Salo was almost 15 seconds back on aggregate for Alan Docking Racing.

Hakkinen admitted his error in judgement, one which many other drivers have since replicated, such is the value of the race to drivers wanting to win it.

Both graduated to F1 the following year and continued to enjoy controversial?battles until Hakkinen hung up his helmet at the end of 2001. 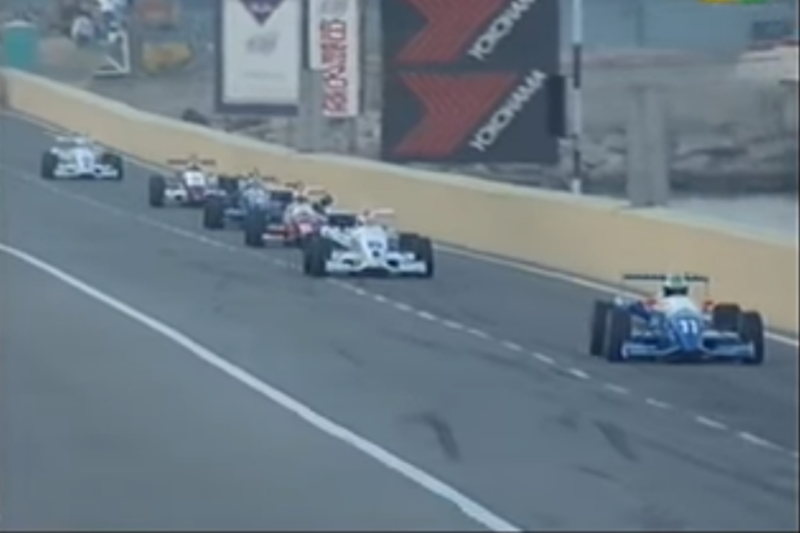 Reigning winner Sacha Maassen returned with West Surrey Racing, but really all eyes were on the group of drivers that had already starred in F3 in 1995.

German F3 runner-up Schumacher took pole, driving for the same WTS Racing team as his brother, beating F3 veteran and?future sportscar star Max Angelelli by 0.025 seconds. Maassen, de la Rosa and Fontana were all within a second of pole, and there were three engine suppliers in the top five.

Once again it was a two-heat format, but this time the result came down to just the first, as a pile-up involving everyone from fourth downwards – triggered by the battling Maassen and Fontana on the opening lap – led to the second race being red-flagged. An hour later it was restarted with 15 of the 29 cars, but it only took a lap before Castroneves and Trulli clashed at the Mandarin Oriental kink, stopping the race again and leaving too little time for it to be restarted before the sun set.

Schumacher made no such errors, and after losing his lead off the line at the start of race one, showed he could take risks by reclaiming it around the outside of the tight Lisboa right-hander which leads into the tighter ‘mountain’ streets. He then used his knowledge of his opposition, pulling out a 1.25s lead knowing Angelelli would not be confident enough to respond.

After winning the mental battle, Schumacher then received a gift when Angelelli was administered a stop-go penalty for a jumped start. He later crashed out of the race. Trulli, who had rarely shone since graduating from karting, inherited second.

While the Italian was defending staunchly from de la Rosa, Schumacher was putting in fastest laps, and even beat his pole time. That run was ended by the appearance of yellow flags, and the additional caution the leader displayed allowed Macau rookie Trulli closed in. Schumacher’s hard work meant he was under no threat though, and he won the race, and ultimately the grand prix, by a massive 6.323s.

In the short time he had to impress in race two, he did just that, repeating his Lisboa move on fast-starting Prema driver Andre Couto, the first Macanese to start the race and the only one to win it five years later. Remarkably 1995 was his first time in an F3 car and first visit to the Guia Circuit. Fontana alluded to gear selector problems limiting him to a distant fifth in race one, finishing between Maassen and Couto.

How he won: Emerged from Michael’s shadow with a confident and measured run from the front
The losers: Jarno Trulli, Helio Castroneves, Pedro de la Rosa, Alexander Wurz, Ralph Firman 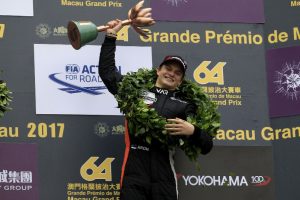 In reality there are very few street circuit specialists. Simply preferring them doesn’t make one a better driver on them. They’re all different, and very rarely does a driver look the most formidable on each one they visit.

For European F3 drivers, the events of Pau this year are therefore not the strongest barometer of Macau success, especially as it was the season-opening round. Instead, the best way of measuring Mick Schumacher’s victory chances are to go by last year’s Macau GP, and the old adage that ‘a driver is only as good as their last race’.

Paddock rumour suggests an alleged Mercedes engine boost for Schumacher and his Prema team-mate?Robert Shwartzman in the second half of the European F3 season led to the sudden turnaround in form for the duo and five consecutive wins for Schumacher.

This ‘boost’ can’t be taken as fact, but the statistics would suggest it’s possible, and the question is therefore whether it will also provide Schumacher such an advantage in Macau.

Schumacher is the only one of Prema’s five drivers yet to win on a street circuit, with a best finish of fifth at the Norisring, but set the fastest lap in the Macau GP last year on his way to 16th, and displayed stronger pace than he had done in the preceding European rounds. Nobody expected him to rip up the form book this season, but having done that, he should have the confidence (if not the engine boost) to do it again at Macau.

To win the grand prix, Schumacher first has to beat his team-mates, most exciting of which is Ralf Aron. The Estonian has had an up-and-down time in F3, but won this year’s Pau GP and drove from 13th to third on his first Macau appearance in a one-off with Van Amersfoort Racing.

Guan Yu Zhou and Marcus Armstrong won at Pau and the Norisring this year respectively, and the experienced Zhou finished eighth at Macau last year. Victory in the final round of the European F3 season, and a rumoured Formula 2 drive in the bag, should also give the Chinese driver a bit of confidence going forward. Armstrong meanwhile should be a favourite for pole having been European F3’s top qualifier.

As previously mentioned, Shwartzman may benefit from the same power advantage as Schumacher, and should be among this year’s top rookies. During his time in Formula Renault Eurocup he won at Pau and Monaco, and took a pole on his Norisring F3 debut.

Motopark’s drivers pose the strongest threat outside of Prema, and it is reigning winner Dan Ticktum who will be favourite this weekend. The defeat to Schumacher in European F3 stung him hard, and he’ll be keen to hit back by winning the final honours of the year. There will also be additional motivation in becoming the third driver to win back-to-back in the F3 era.

While Ticktum’s form dipped as the European F3 season drew to a conclusion, his team-mate and new Red Bull stablemate Juri Vips became Motopark’s lead driver. His tenacity?and spectacular style make a win or bin scenario likely for the 18-year-old. His lack of Macau experience will also hurt him, but don’t be surprised if he’s the fastest driver by the end of the weekend. His devastatingly brilliant Norisring weekend will be fresh in the mind of his rivals, and he could be the first rookie winner since Keisuke Kunimoto’s sensational 2008 triumph.

Still only 20 years old, DTM race-winner Joel Eriksson will also have a favourite tag attached, having taken pole last year. He finished second to Callum Ilott in the qualifying race, then a collision with the Ferrari Driver Academy member?while battling for the lead ended his main race. It was the second successive year he’d failed to finish. 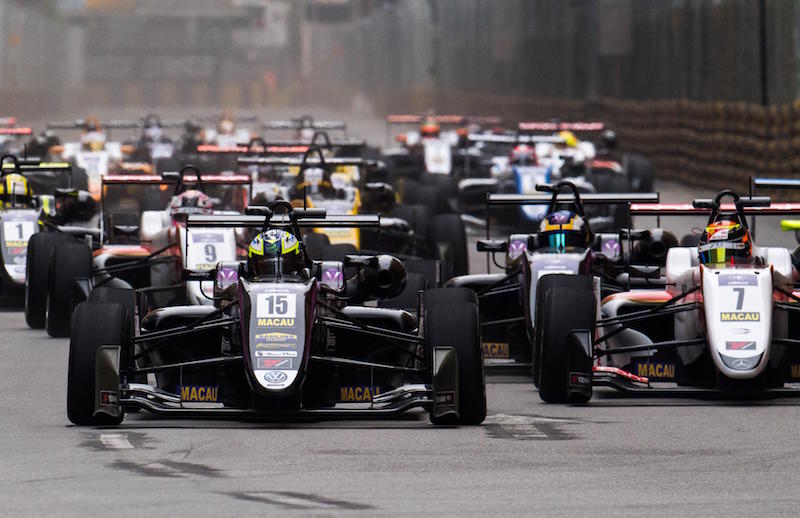 Speaking of Ilott, the GP3 frontrunner returns with Carlin, the team he made his single-seater and Macau debut with back in 2015. He’s quick, and his 2017 qualifying race win showed he’d already come on in control since binning it from the lead at Pau several months earlier.

He will likely lead Carlin’s charge, but he has Sacha Fenestraz alongside him, who made a quietly impressive Macau debut last year and won at Pau to start the European F3 season. Carlin’s most consistent asset, Jehan Daruvala, also returns for a second shot, but unsolved tyre issues has scuppered the team since summer. The unique nature of Guia, and a different tyre supplier, may make those difficulties insignificant this weekend.

Ferdinand Habsburg, one of the stars of last year before his final corner crash, has swapped Carlin for Motopark. He’s had a frustrating 2018, but being back at Macau could re-ignite the magic and bring him what he deserved in 2017.

Hitech GP duo Enaam Ahmed and Jake Hughes, who’s struggled in GP3 this year but dominated in Asian F3, are also outside shots for victory. Ahmed has enjoyed a solid rookie European F3 season, and enjoyed Pau and the Norisring, and Hughes was top rookie on his Macau debut two years ago. Both will be watched closely by 17-year-old team-mate and home hero Charles Leong.

As usual there is a contingent of drivers from Japanese F3, and are led by Alex Palou, who actually spent 2018 racing with Hitech in Europe. He’ll be driving for B-Max Racing, and is joined by top Super Formula driver Yuhi Sekiguchi. Both have Macau experience, and are proven talents, and will benefit from Motopark engineering input as part of the new tie-up between the two squads.The 2017 Japanese champion Sho Tsuboi will be making his third attempt at the race, and wanting to prove his devastating form isn’t exclusively limited to his home country, but his TOM’s team has struggled in Macau in the current engine era despite its five previous wins.

In conclusion, Schumacher is far from favourite despite his late-season tidal surge of success in Europe. But what makes it different this year is he won’t be touted for victory because of his name, but because of his own success.

6. Callum Ilott -?supremely fast in a F3 car and qualifying race winner in 2017

5. Mick Schumacher -?the form man in European F3 but Macau can’t simply be won from the front

4. Joel Eriksson -?unfortunate not to win last year, the Swede will love being back in F3

2. Juri Vips -?F3 rookie beat expectations, and most of the grid, in Europe this year

1. Dan Ticktum -?A return to Macau and a recent F1 test should put the wind in the 2017 winner’s sails