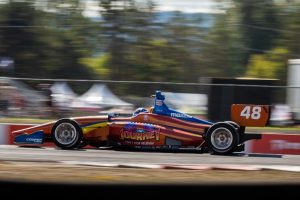 Ryan Norman will race in Indy Lights with Andretti Autosport for a third successive season in 2019, following his run to fourth in the standings this year.

The 20-year-old American started his car racing career in the Skip Barber Winter Series. He followed the SCCA single-seater leader, finishing second in the Southeastern Formula Enterprises championship then winning the Atlantic title in 2016. Last year he switched to Indy Lights, taking one top five finish on the way to 11th in the standings.

?I?m really excited to be returning to Andretti Autosport for my third season competing in Indy Lights,”?said Norman.

?We?ve built a solid foundation over the past two years and I?m ready to fight for wins, podiums and ultimately the championship, with such a great group of people who have become like a family to me.?

Norman won at Gateway Motorsports Park this year, and took pole for the final race of the season at Portland.

?We?re very happy that Ryan is rejoining us for his third season of Indy Lights,??said Andretti Autosport president, JF Thormann.

?We were pleased with his performance this past season, and his potential as a driver began to really shine after his win at Gateway. He?s right on track with his progression plan put together by his engineering team, and we feel strongly that he has what it takes to be a contender for the 2019 championship.?

Norman is the first driver on the entry list for 2019, although it is understood Pro Mazda graduates Rinus VeeKay and David Malukas will also appear on the grid with Juncos Racing and BN Racing respectively.

Estonia: The underdog that keeps on achieving