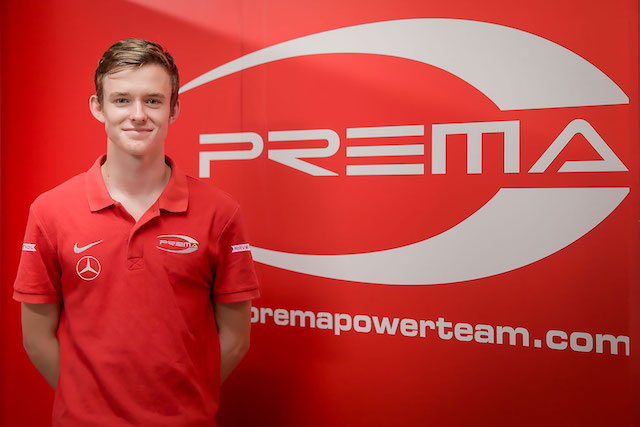 The 2017 season will be the 18-year-old Briton’s third in the series, having stepped up into the category from karts as a Red Bull Junior for 2015.

He moved from Carlin to Van Amersfoort Racing for 2016 and scored his first two race wins and ended the year sixth in the standings.

At Prema he will hope to continue the Italian squad’s run of consecutive drivers’ champions stretching back to 2011.

?We looked at all the possibilities for 2017: GP3, Indy Lights as well as GP2 but in the end with only two years of car racing experience, another year in F3 made the most sense,” said Ilott.

“Prema?s record is impeccable, and?having decided to return F3, it was the team I focussed on joining.

“I spent a lot of time in my karting career in Italy, it?s a country I love. Just walking around the Prema factory, the ?family feeling? you get with the Italian teams came flooding back.

“With its successful GP2 squad, I think it?s also a team that offers the chance to climb the ladder to F1.

“I?d like to thank VAR for everything they did for me in 2016. They enabled me to get my first wins in cars, something I?ll never forget.

“Now it?s time to take that knowledge and aim for the championship in 2017 and to start the test program as soon as possible.”

Team boss Rene Rosin commented:??I am thrilled to be able to collaborate with Callum for the next European Formula 3 season.

“As?he was one of our?main?competitors in the last couple of?years,?we got to know him well, and his progress as he became one of the benchmark drivers in the championship.

“More than once, he showed outstanding natural car control skills??that helped him excel, especially in challenging conditions?such as we saw in Macau last weekend.”

Ilott is expected to be joined at Prema by the team’s Formula 4 graduate?Mick Schumacher, as well as by ex-Motopark driver?Guan Yu Zhou as part of a rekindled relationship with the Ferrari Driver Academy that will see?Charles Leclerc and?Antonio Fuoco step up to GP2 with the outfit.