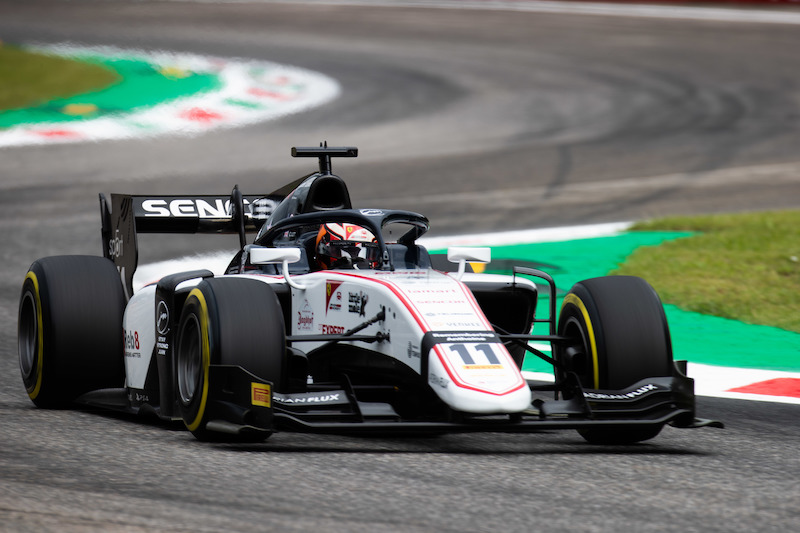 Intermittent showers throughout made for greasy track conditions, with the track yielding it’s fastest times 10 minutes into the 30-minute qualifying session.

Ilott vaulted to the top of the timesheet three times as the track continued to evolve and benchmarks tumbled.

His 1m33.887s benchmark propelled him to provisional pole when Nobuharu Matsushita looped his Carlin-prepared car at the Della Roggia chicane, beaching the car in the gravel trap and triggering a red flag.

While running was suspended, the drizzle returned. Immediately after running resumed, Arden’s Tatiana Calderon spun at Ascari making contact with the outside wall and sending the session into another red flag delay.

For the remaining 15 minutes, drivers struggled to match their previous personal best efforts and it took until the final minutes of the session until improvements were posted.

Championship leader Nyck de Vries recorded session best sector one and three times and managed to climb from seventh to qualify fourth for ART Grand Prix. Jordan King was the only other driver to improve, and elevated himself from 11th to eighth.

Ilott’s time remained the fastest in the session to secure an undoubtedly emotional pole, following the tragic accident at Spa-Francorchamps last week in which his team-mate Juan Manuel Correa sustained injuries and his former team-mate Anthoine Hubert lost his life.

Virtuosi Racing’s Zhou was 0.143s adrift of Ilott in second place, while Mazepin outqualified team-mate de Vries for the first time this season in third.

Sergio Sette Camara was fifth for DAMS ahead of Matsushita, who still held onto sixth place despite missing the final 20 minutes of the session. Championship contender and Williams reserve Nicholas Latifi was seventh.

Mick Schumacher pedalled his Prema-prepared car to ninth ahead of Carlin’s Louis Deletraz, who had set a session best sector two benchmark before Matsushita’s spin forced him to abandon what would prove to be his final representative qualifying effort.

Luca Ghiotto was fastest in practice but struggled to 14th for Virtuosi, ahead of Marino Sato – who spun while en route to the pits during the second red flag period – Mahaveer Raghunathan and Tatiana Calderon.