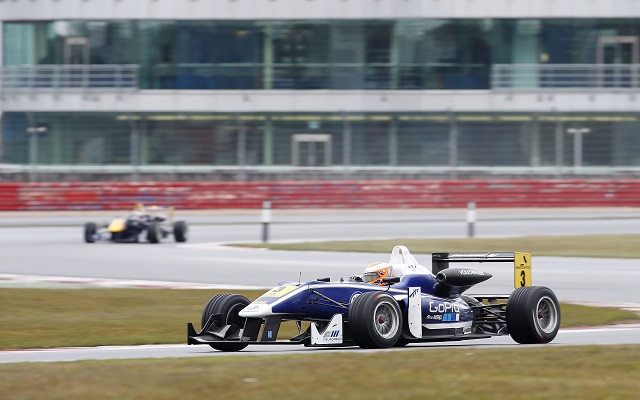 The two qualifying sessions for the Silverstone round of the European F3 championship saw Harry Tincknell and Alex Lynn score their debut poles in the category.

The Carlin man, Tincknell, enjoyed a remarkable session one in qualifying, mastering the drying track with three laps that were better than any other driver’s best. Thus, as the session was red-flagged with less than two minutes to go, Tincknell emerged as the polesitter for races one and two.

Fellow Brit Lynn took second for race one ahead of Raffaele Marciello and Felix Rosenqvist (with the trio lining up in reverse order for race two by their second-best times), as Nicholas Latifi took fifth for both races. Eddie Cheever, Jr. and Lucas Auer both recorded a sixth and a seventh, while Will Buller, Mans Grenhagen and Pipo Derani rounded out the top ten for race one and two.

The second qualifying session took place in wetter conditions and saw Prema record a 1-2 for race three with Lynn ahead of Marciello on the front row. Rosenqvist took third ahead of Jordan King and Buller, while Latifi beat his teammate Tincknell to sixth. Auer, Dennis van de Laar and Sven Muller completed the top ten. The session was red-flagged early on when Tom Blomqvist stopped on track – as such, he failed to set a time and will start at the back along Andre Rudersdorf and Sandro Zeller, who also didn’t record a full lap.

Marciello and Rosenqvist set the pace in practice at Silverstone

Tincknell holds Lynn at bay to take race one win