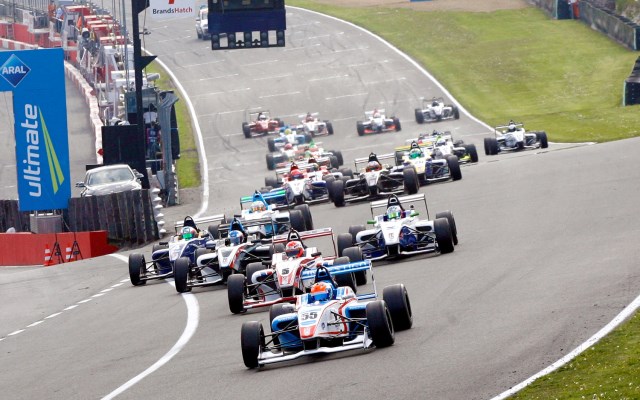 The BRDC Formula 4 Championship has confirmed a calendar made up of the same eight events for its second season in 2014.

One major change to the schedule is the loss of a DTM round at Brands Hatch to support, but BRDC F4 will instead be part of the bill at the replacement Blancpain GT Sprint Series round in May.

It will mean that BRDC F4 will have two rounds on the Grand Prix loop at the Kent circuit, with the second coming in support of British F3/GT at the end of August.

Silverstone continues to host the season opener, as well as a second round in August. Snetterton will also still have two rounds – in June supporting British F3/GT and as the new season finale on a later date at the end of October, switching from the penultimate slot with Donington Park. Oulton Park is the other circuit present, retaining a date in July.

On the announcement of the 2014 calendar, series chief Jonathan Palmer praised the success of the inaugural campaign and stated that he expected another large grid in 2014.

“The outstanding success of our BRDC F4 championship in its first year is proof that our concept is exactly what the market wanted ? a high performance, great looking single seater with standard setting low running costs and such affordable budgets,” said Palmer. “Equality of car performance and reliability has been excellent and with some very talented young drivers, the racing has been extremely close in 2013.

?The 2014 season is certain to be even more competitive and is sure to have a capacity 26 car grid as drivers recognise that BRDC F4 is the place to be.? Our calendar has by far the most prestigious circuits of any UK single seater championship; two visits to the Silverstone GP circuit and another two to the fabulous Brands Hatch GP are sure to be of huge appeal to the drivers.? With its fully mature 300 layout Snetterton is now one of the UK?s best circuits, whilst Oulton Park and Donington are two more driver favourites to complete the line up.”