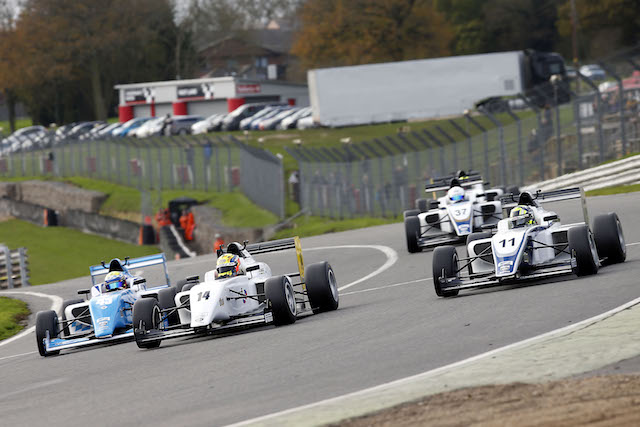 It will now be known as the?BRDC British Formula 3 Championship, a move that reflects?the step up in performance made by the introduction of the new Tatuus-Cosworth car for last November’s Autumn Trophy, with lap times close to F3.

With?its new status as a national F3 series, which has been arranged in cooperation with the FIA and MSA, super licence points will be on offer to the top five drivers in the final standings.

“I am delighted that we have successfully worked with the FIA and MSA to streamline British single seater motorsport and establish a clear and logical hierarchy for both drivers and teams,” said series founder Jonathan Palmer.

“Our much advanced 2016 BRDC F4 Tatuus Cosworth car has proved an outstanding success, being very close to the performance of British F3 in its heyday – but at less than half the budget.

“Cost effectiveness and value for money is critical to any championship?s health, and having set standards with our BRDC F4 Championship we are now doing the same at F3 level with the BRDC British F3 Championship.”

The FIA single-seater commission under Stefano Domenicali has looked to re-establish the concept of national F3 series to bridge the gap between its F4 and European F3 categories.

National F3 series in Britain, Germany and Italy collapsed as the FIA’s work to improve the popularity of European F3 took off under previous president Gerhard Berger.

To protect the F3 concept, the FIA?also became stricter with what could use the name, a situation that led to?the Euroformula Open series – which combines?the Dallara F312 chassis with?a low-cost spec engine – to drop the moniker.

However, with?the Tatuus-Cosworth car – based on an FIA F4 chassis with greater aerodynamics and engine power?- now forming the basis for a national F3 series, the FIA’s approach has evidently changed.

The move could?clear the way for MSA Formula, the FIA-rules F4 series in Britain, to use the F4 name?now that Palmer’s series will no longer do so.