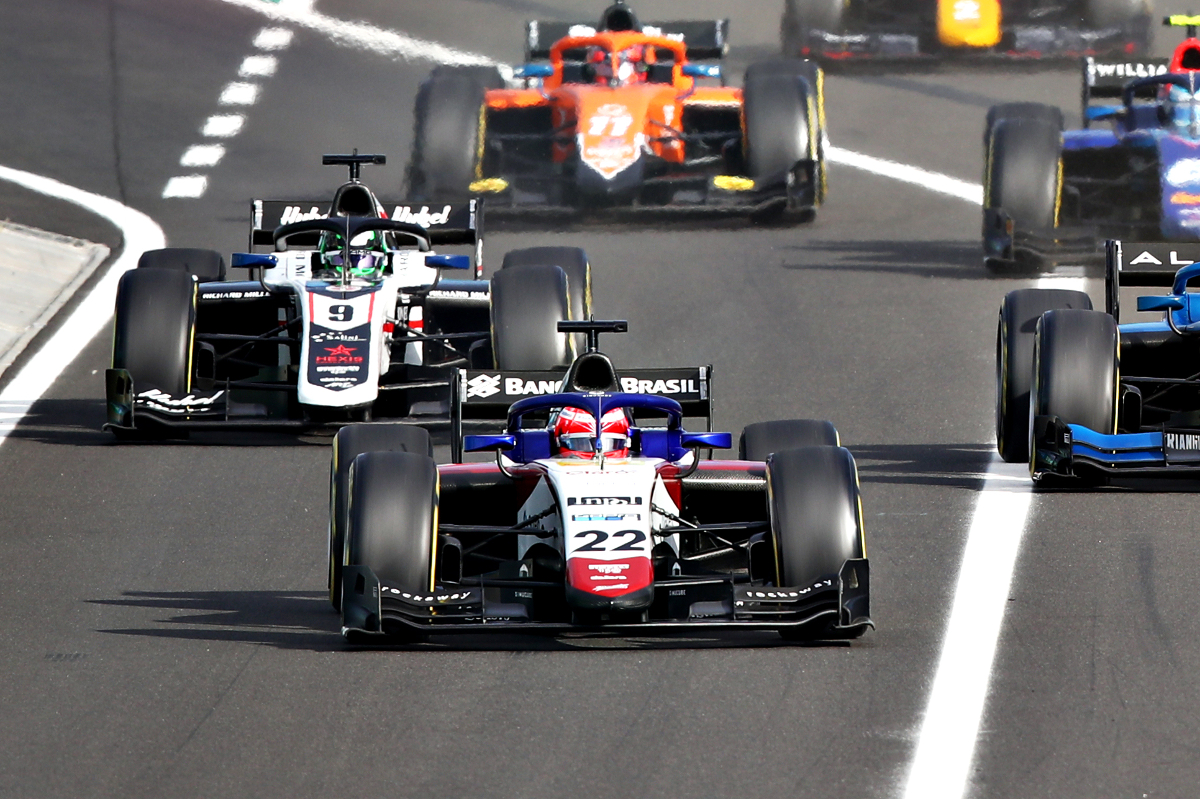 Felipe Drugovich may lead the championship, but another Brazilian is also starring in Formula 2 this year and his form is even more of a surprise than his compatriot’s. How high can Enzo Fittipaldi’s season go?

Over past three rounds, Theo Pourchaire has been the top scorer in Formula 2 with 53 points. That’s one more than DAMS’ rookie Ayumu Iwasa, who has risen from 13th to seventh in the standings, and nine more than Charouz Racing System driver Enzo Fittipaldi who has climbed from ninth to fourth in the points table. Championship leader Felipe Drugovich has collected only 32 points, and looks to have missed his window of opportunity in the fast-moving Formula 1 silly season.

All but Pourchaire is with what would be considered a frontrunning team, at least since F2 switched to 18-inch wheel rims in 2020, and at Charouz it’s looking likely that Fittipaldi will not only score all of the team’s points this year but also pick up a bigger haul than it has been able to achieve across both of its cars over the previous three campaigns.

Three podiums from the past five races, including second places in the Red Bull Ring and Hungaroring feature races, is not only a great run of form for Fittipaldi but also a huge turnaround for his first full season (after doing three rounds with Charouz in 2021) as he didn’t score this year until a remarkable second in the Imola feature race, which had followed six races with no points. The next highest-placed driver to have endured that kind of run is Trident’s Richard Verschoor, 13th in the points.

Fittipaldi has been exceeding pundits’ expectations, his rivals’ expectations and also his own, and he’s now being taken more seriously than ever before as the 5′5″-tall Brazilian was once – kind of fondly – meme material with fellow racers.

Earlier this year he joined the Formula Scout Podcast to discuss how his breakthrough Imola result was a big confidence boost for the team and himself, particularly after a winter in which he had to recover from last December’s horror crash in Jeddah, and his double podium at the Hungaroring last weekend (becoming only the third driver to achieve the feat this year) meant Fittipaldi had plenty to talk about.

Qualifying ninth put Fittipaldi on the front row of Saturday’s sprint race, and he immediately moved into the lead but then dashed his own hopes of victory by having a lengthy lock-up of the front-left tyre at turn two.

“I had a really, really good start off the line,” he said in the post-race press conference. “I was able to overtake Jack [Doohan] and then was in the lead after the first corner. At turn two, honestly, I don’t think I braked that late but the track had very low grip. As soon as I hit the brake, my front-left [tyre] locked up and just went straight off the track, where it was a little bit damp. I was actually quite lucky to come back in third. I almost got overtaken by [Frederik] Vesti, but I was able to keep my third position and from then on we had a really strong pace in the opening laps.”

Fittipaldi put his strong launch down to “making a lot of effort in the formation lap to get the tyre up to temperature”, with “eight or nine burnouts” on the way to his grid spot – three times the usual amount – and on reflection the next day he was quite clear that his “little mistake” at turn two cost him a maiden F2 win.

But the fact he had made such an error and still come away with a top result, and had a car that still handled well and was on the pace despite the early punishment of the tyre, showed the scale of progress from the pointless run his year began with.

“This year has exceeded my expectations a little bit because physically I wasn’t 100% in the first two rounds,” Fittipaldi said.

“I’m sure if I was 100% I would have scored points there. The first two rounds were really difficult, then we had the break and then Imola I was 100% and I already gained a couple of tenths just by being physically in a better state.

“This season is going really well. I knew the potential was always there and consistency has been everything for me this season, just finishing every race and trying to get as much knowledge and experience of the F2 car and just continue improving every race weekend.” 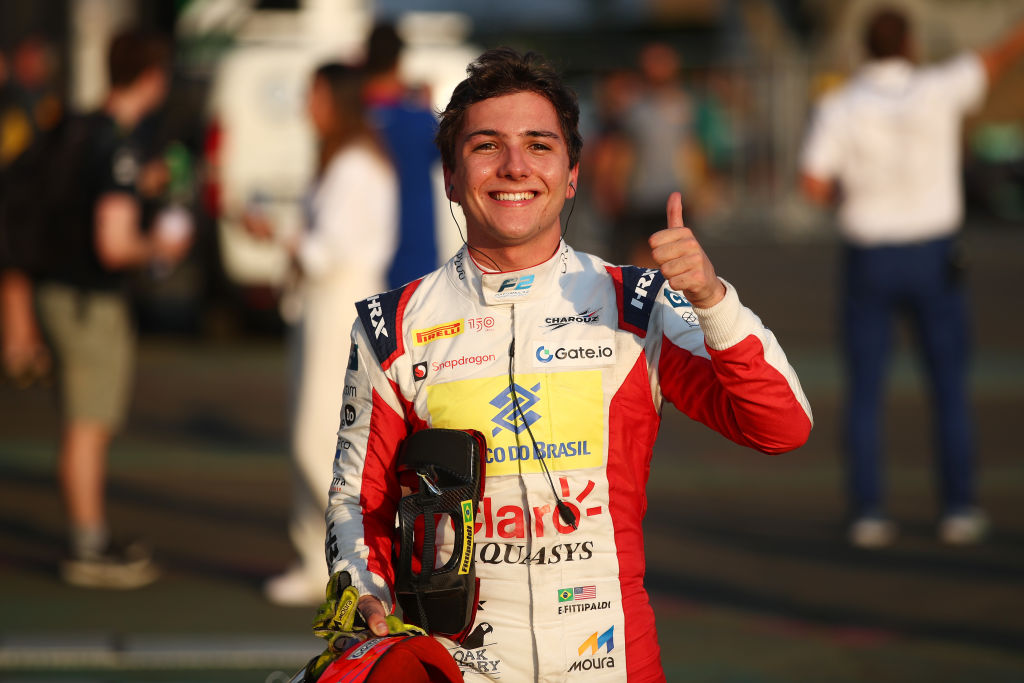 Avoiding retirements had been a goal “from the start of the season”, and keeping out of trouble (and mechanical woes) has clearly been rewarding now he’s at the top end of the championship. His only retirement was the Paul Ricard sprint race, where he was involved in a clash with two other cars, and he is one of five drivers to have met the chequered flag in 19 races out of 20 this year. But what has turned more of those finishes into podiums and healthy points hauls?

“The test we did in Barcelona, the [in-season] three-day test, we were able to get a lot of information, I was able to learn a lot about the tyres and the warm-up procedure and everything,” explained Fittipaldi.

“Those three days of testing were very important for us, and not just for me, but for the whole team. There we made a pretty big step forward. We got the podium in Imola and since them we’ve been always in the top 10. I think just me getting more experience, learning more about the F2 car, how the tyres work and getting myself adjusted with the set-up as well.”

An example of Fittipaldi’s understanding of the tyres was being able to stretch his stint on the soft compound tyres longer into the Hungaroring feature race than anyone else could, meaning he not only moved into the race lead when he stayed out on track but then also claimed the net lead with an overcut strategy as he maintained a strong pace in the few laps extra he did on well-used tyres.

Pourchaire, on the same strategy, passed Fittipaldi soon after his “amazing” pitstop and he spent the rest of the race between a few seconds behind as they made their way back up the order to finish first and second.

Fittipaldi had actually wanted to pit a lap or two earlier than he did, with visibly severe degredation on his front-left tyre on a track full of right-hand corners, but Charouz was confident his driving on a heavy fuel load was being kinder to the rubber than it maybe looked.

“The tyres at that point were really bad. The left-front was completely dead, but we were still really fast,” Fittipaldi said post-race.

Too cool for school 😎@enzofitti pulls out all the stops to move past Vesti 💫#HungarianGP #F2 pic.twitter.com/7ASYQj6GoV

“And I was a bit worried because I was everyone else in front of me boxed, and I told my team I think we should box, and my team said ‘no, no, we’re going to stay out’. I was worried, but even with the left-front completely dead, I had a really good rear axle so my laptimes were still very competitive. And it was the right call. We boxed at the right time. I think one lap later would have been too late, and one lap earlier would have been too early, so everything worked out very smoothly for us.”

Switching to the medium for the second stint would prove even trickier to handle on a cool track, but Fittipaldi revealed a strategic adjustment to his driving style that again shows how at ease he is in F2 now.

“With the colder conditions it was difficult to bring the temperatures up, so there’s more cold graining, more sliding. For me, the difficult part was really when we were going through the traffic. Just managing as best as possible to not make mistakes, and just make the right overtake at the right time and not destroy your tyres behind the traffic.

“That for me was critical in the middle of the race. I tried saving, I was really like when I saw Theo behind a car I was coasting through the corners because I knew I was going to catch him if I pushed, so I really waited until he overtook and then I would push to get behind in the last sector and then overtake in the front straight.”

As a result, Fittipaldi lost less time in relation to Pourchaire as they tried to pass yet-to-pit cars, and it also helped his management of the tyres.

“It was really thinking about it and just taking care of the tyres, being very gentle, and especially on the right-hand corners with the left-front. It was really, really important today.”

Both on the track and in discussions with the press, Fittipaldi has shown his development in F2 since his arrival last September. But there’s one glaring ommission still: a race win.

“I think it’s very, very close, it’s just a matter of time. I’m sure it will come very soon. We have the pace. I hope for that very soon, in the next round or two we can get a win.”

Drivers to get two F2 podiums in one round (feature + sprint)