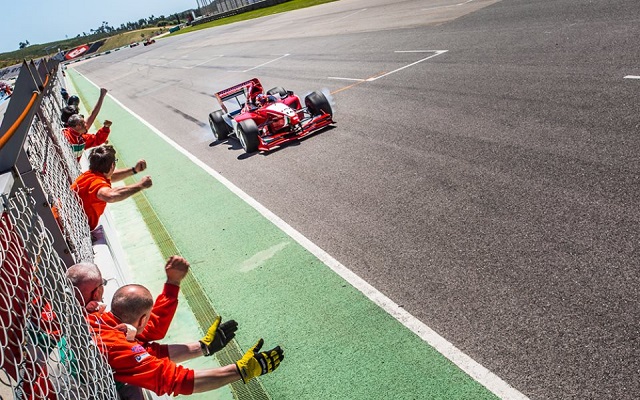 Team Italy’s Mirko Bortolotti continued his reign over the Formula Acceleration field, taking his second win in race two of the inaugural round at Portimao.

Bortolotti kept his rivals at a consistent distance behind throughout the two-stop race and would eventually secure the race victory by a margin of 3.6s.

The Italian kept his lead off the start, while it was Slovakia’s Richard Gonda who slotted into second, overtaking Nigel Melker and Felix Rosenqvist.

Melker opted to make his first stop earlier than his rivals and managed to undercut Gonda in the pits, while Bortolotti, leaving his stop a bit later, still managed to rejoin safely ahead of the opposition.

After Gonda retired on lap ten, Rosenqvist began putting pressure on Melker for second as Bortolotti continued to control the race about half a second up the road.

The Dutchman was, again, the first to initiate the second wave of stops among the leaders, but both Bortolotti and Rosenqvist followed suit a lap later, maintaining the status quo.

There wouldn’t be any further fighting in the top three as Rosenqvist dropped off the leading duo while Melker appeared content to settle for second.

As such, it was Bortolotti’s win number two, with Melker and Rosenqvist rounding out the podium. Sebastian Balthasar and Armando Parente were the only two other drivers to finish on the lead lap, taking fourth and fifth respectively.