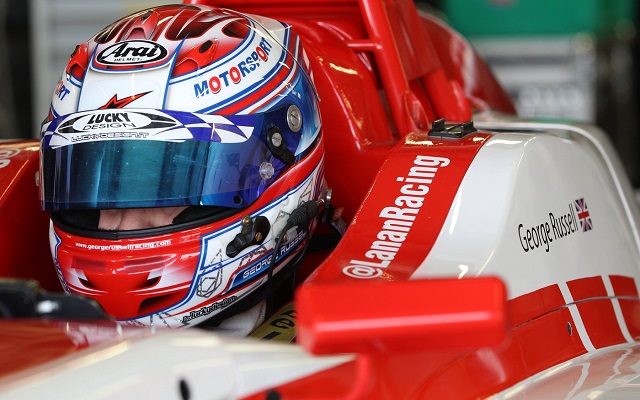 Lanan Racing’s George Russell immediately followed his first victory in cars with another one, converting sixth on the grid into first at the checkered flag in the final race of the BRDC F4 Silverstone opener.

The young karting graduate was third by the end of lap one and went on to assume the lead on lap three, cruising to the finish line from that point on.

Having set the fastest lap in the opening race, it was Sennan Fielding who had pole position with Nicolas Beer alongside him on the front row. The HHC man managed to keep the lead off the line, only to lose it over the opening lap and then subsequently spin out of second.

As such, Beer assumed first, but he would be shuffled down the order when overtaken by Russell for the lead on lap three.

With the front row starters both struggling, Diego Menchaca and Arjun Maini entered the top three early on. Neither of them would challenge Russell, yet Maini did pull off a successful overtake on Menchaca on lap five to establish a Lanan 1-2.

There were no further changes in the fight for the podium spots, as Russell took the win from Maini and Menchaca. Chris Middlehurst, reigning Protyre FR2.0 champion, recorded the best result of his weekend in fourth, while Struan Moore put on another fantastic drive from the back row of the grid to finish fifth.

Fielding originally crossed the line in fifth, but was subsequently excluded from the race for a collision with SWR’s Beer. As such, Will Palmer inherited sixth, ahead of Douglas duo of Charlie Eastwood and Rodrigo Fonseca.