Bianchi gets F1 race chance with Marussia in place of Razia

Jules Bianchi will race in Formula 1 this season after replacing Luiz Razia at Marussia after one of the Brazilian’s promised sponsors failed to produce a payment, prompting the team to terminate his contract.

Frenchman Bianchi, a Ferrari protege managed by Nicolas Todt, had been working on securing a race seat with Force India for the coming season, but the Silverstone-based squad instead re-signed Adrian Sutil, announcing the deal yesterday.

GP2 Series runner-up Razia had earlier taken the place of Timo Glock at Marussia after financial constraints forced the German to leave the team, but has been absent from the car in Barcelona testing. Bianchi will take over from new teammate Max Chilton behind the wheel of the Marussia car for the final two days of pre-season testing this weekend.

“I am thrilled to have secured a race seat with the Marussia F1 Team,” said Bianchi. “Racing in Formula 1 this season has been my goal over the winter and after evaluating a number of options I am very excited to have this opportunity to demonstrate that I am ready for this next step in my racing career.

“I am also very grateful to the Ferrari Driver Academy that has always supported me and has given me the possibility to mature as a racing driver enabling me to be fully prepared for this new exciting challenge. The next two weeks of preparation for the season will be incredibly busy but I am ready to get started tomorrow with my first day in the MR02.”

Team principal John Booth said: “We are very pleased to welcome Jules Bianchi to the Marussia F1 Team. Jules is a proven talent who is highly regarded within the Paddock. He has been on a clear trajectory towards Formula 1 and has achieved some impressive performances through the various feeder formulae, notably his 2012 season in Formula Renault 3.5 when he was also Reserve Driver for Force India. He is part of the Ferrari Driver Academy and his obvious pedigree put him on the radar for a number of teams over the winter as a driver ready to step up to Formula 1.

?We have found ourselves in a situation where we have had to terminate our contract with Luiz Razia. Having made clear the basis on which we must operate in 2013, and given the steps we had taken to put that new structure in place, we had no alternative but to remain true to the principles which we had identified as being key to securing our long-term future.

?We can now focus on the remainder of the testing programme and preparing for what looks to be a promising season for our Team. Jules can now look forward to a very swift initiation into the Team over the course of the next two days here in Barcelona, when he is expected to run for one and a half days to afford both our drivers some dry running with the latest aero specification.”

Bianchi’s signing means there will be five debutants on the grid for the Australian Grand Prix in just over two weeks’ time. 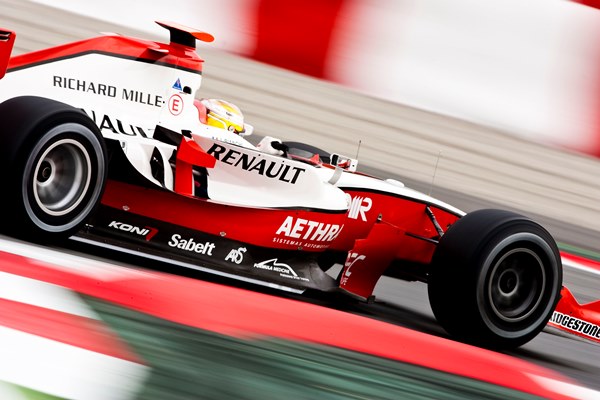 Grandson of GT champion Mauro Bianchi and grandnephew of Le Mans winner and former F1 driver Lucien Bianchi, Jules enjoyed a successful karting career up until 2006, when he won the WSK International Series in the ICC class and second in the Formula A World Cup. He moved into cars in 2007 in Formula Renault 2.0 with the SG Formula team, impressively winning the French title at the first attempt with five wins from 13 races.

For his second year of cars he moved into the Formula 3 Euro Series for the ART team co-owned by manager Todt. He finished the season third in the standings behind the more experienced Nico Hulkenberg and Edoardo Mortara. He also beat Hulkenberg to win the prestigious Masters of F3 event, held that year at Zolder in Belgium.

Bianchi remained in the Euro Series for 2009 and unsurprisingly dominated the championship, winning nine of the 20 races. Meanwhile, Todt’s links to Ferrari, as son of former team boss Jean and Felipe Massa’s manager, put Bianchi in contact with the Scuderia. He tested for them for the first time at the Young Driver Test in December at Jerez and was made the leading member of the new Ferrari Driver Academy.

For 2010 Bianchi stepped up to GP2 with ART, expected to follow in the footsteps of Hulkenberg who had won the title at his rookie campaign the previous year. He didn’t find things so easy though, and despite three pole positions including the Barcelona season opener, he failed to win a race. With four podium finishes he ended up third in the final standings behind Pastor Maldonado and Sergio Perez.

At the start of 2011 he ran fellow Frenchman Romain Grosjean close for the four-race GP2 Asia title, and was expected to give his compatriot the biggest challenge when the main campaign began in Turkey. He had a pretty disastrous start to the season however, scoring points in only two of the first eight races, failing to finish three of them due to collisions with rivals.

The pressure on, he picked himself up for round five at Silverstone, delivering pole position and converting that into victory. He wouldn’t add a second win, but he did prove he could mix speed with maturity and consistency, scoring points in all of the nine remaining races with four podiums. That was enough to finish third in the standings again, with one more point than the year before.

Unable to convince any F1 teams to give him a race seat for 2012, Bianchi took up a reserve role with Force India coupled with a campaign in the Formula Renault 3.5 Series with Tech 1 Racing. After a difficult opening round at Aragon that saw him excluded from a second place due to a technical infringement, he took second-place finishes in Monaco and Spa before scoring his first win from pole at the Nurburgring. A second win came at Silverstone, but he missed the opportunity to make it a double thanks to a bad start from pole on the Sunday. A third win of the season on home soil at Paul Ricard put him into the championship lead, and he took pole for race one of the Barcelona finale. Not for the first time though he fluffed his start, before spinning late on and finishing down in seventh. Rookie rival Robin Frijnsmeanwhile took third and reclaimed the points lead. Bianchi overtook his rival in Sunday’s race to reclaim the initiative before Frijns collided with him, taking both out the race and controversially deciding the championship in the Dutchman’s favour. 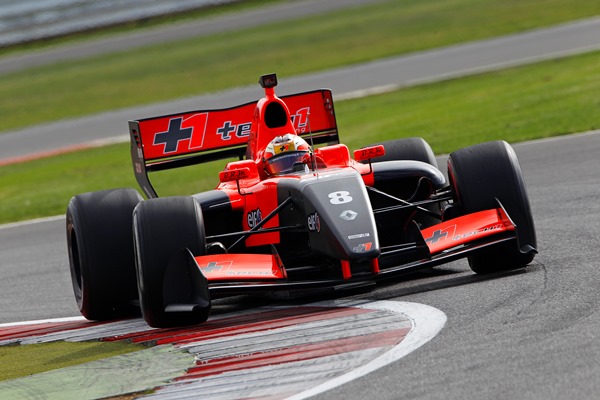 Bianchi comes with sponsorship from Todt’s financial partner Aethra as well as whatever Ferrari have offered, but he must not be confused for a so-called ‘pay driver’. Back in 2009 he was the hottest talent around, prompting Ferrari to snap him up. His performance in his second season of cars the year before was sublime and as for his title year, only Lewis Hamilton has won a greater proportion of races in a season – from a list of champions that includes Hulkenberg and Di Resta (who beat Vettel).

There’s no denying that his three seasons since in more powerful machinery have not been up to the same standard. But top three placings in both of his first two seasons in GP2 is not something any of this year’s other GP2 graduates can claim to match. His failure to convert poles to win in season one and his succession of incidents early on in season two are obvious flaws in his record. He ironed out the incidents with some impressive consistency for the remainder of 2011, but he only won one race in what wasn’t the strongest of fields.

Last year it looked as though he was mixing speed with maturity again on his way to what would have been a deserved title, but then came Saturday in Barcelona. Rather than rival Frijns – fresh out of Formula Renault 2.0 – it was the ‘veteran’ Bianchi who cracked under the pressure. Regardless of the way things finished the following day, this leaves a significant question mark over his outright potential.

But he is more than ready for Formula 1. Most importantly, you do not just lose the kind of ability he showed earlier in his career. He will go into his first season somewhat unprepared, but he should not find beating Chilton too much of a challenge – unlike Razia he is evidently quick in qualifying as well as in races. It will be hard to show what he can do in a Marussia, but with Ferrari behind him there will no doubt soon be plans to move him up the grid for 2014.

With Bottas jumping straight up from GP3/F3 level – where he was certainly no more impressive than Bianchi was – Jules is perhaps the most complete, quickest driver out of the five rookies. It shouldn’t have taken until 15 days before lights out in Melbourne for him to have his place on the grid and he probably deserves something better than a Marussia, but it’s good to have Bianchi in F1. Now it’s a matter of seeing just how good he can become.

Ed Jones in control in qualifying at Jerez