The Caterham F1 Team has announced Alexander Rossi and Ma Qing Hua as its reserve drivers for the 2013 season.

American driver Rossi continues to remain a part of the team that signed him up two years ago, and will be taking part in a number of Friday first practice sessions this year, having made his debut appearance on a Grand Prix weekend in Spain in 2012.

“After many discussions this winter with Caterham F1 Team regarding my 2013 program, today’s announcement brings me even closer to my goal of racing in F1,” said the 21-year-old.

“2013 will be my third season with the Caterham family and I’ve built solid relationships within the whole team. My goal for the Friday practice sessions that I will drive this season is to fulfill the team’s runplan for each session, work closely with everyone and learn as much as possible, always being ready for the next opportunity. As Caterham F1 Team’s Reserve Driver I will attend all F1 events, allowing me to integrate fully within the team technically, commercially and from a sporting perspective in F1, best preparing me for the next step.

“I want to thank Caterham shareholders Tony and Kamarudin for their complete support and Team Principal Cyril Abiteboul for the trust he has placed in me to carry out these duties. I plan to make the most of this season and the opportunities afforded to me so I’ll be best prepared for what comes next.”

China’s Ma joins Caterham after making five FP1 appearances for the now-defunct HRT squad in 2012. He will race for the team’s GP2 arm after testing in the category for the first time this week at Jerez, where he was on the pace throughout.

“I am very excited about joining the Caterham family and would like to thank everyone at Caterham F1 Team and Caterham Racing for giving me the chance to race in GP2 and to extend my F1 experience,” said 25-year-old Ma, who last raced in the China Touring Car Championship in 2011 and last competed in single-seaters in a single Superleague Formula round in 2010.

“Both teams have everything they need to keep growing in the right direction and I am looking forward to playing an important role in helping them achieve what they’ve set out to do this year. I know the fans at home will be really excited to see me race in GP2 and with the F1 work I also have ahead of me, China can be proud that it continues to have a driver involved in motor racing at the very highest level.”

Abiteboul added: “I’m very pleased to welcome Ma into our team. Alexander continues his development with us into 2013 and his promotion is a reflection of the investment we are making in him for the future. Ma joins us with previous F1 experience from 2012, and will play a key role in helping our GP2 team achieve their 2013 goals. We are looking forward to helping him develop his talents, both in the F1 and GP2 environments, and giving Chinese fans a figurehead to support on track throughout the year ahead.

“As Reserve Drivers, both Alexander and Ma will attend every race with us and will be driving in a number of FP1 sessions to continue their development. One of the main challenges facing young drivers moving up to F1 is the sheer number of people they have to interact with compared to any other level of their motorsport career. They go from a small number in Formula Renault 3.5 to more than 15 in F1 across engineering, performance, reliability, engine, KERS, strategy, communications and marketing.

“The program we have devised for Alexander and Ma will allow them to immerse themselves completely in the F1 environment throughout 2013, preparing them for the day when they take the next step up to the ultimate level.”

After racing in Formula Renault 3.5 for Caterham last year, Rossi had been expected to step up to GP2 with the team. However, today’s announcements suggest this is unlikely, together with the fact that Sergio Canamasas ran alongside Ma at Jerez this week. 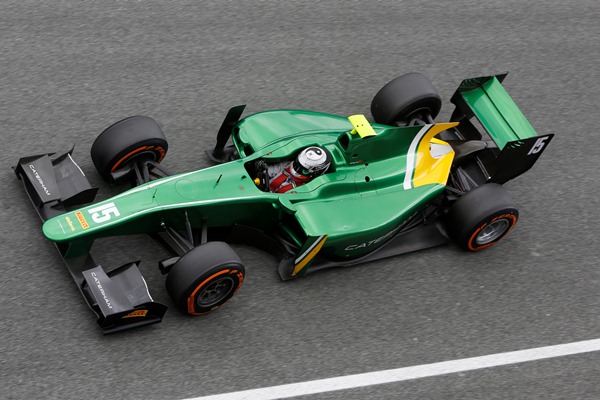 It’s easy to criticise Caterham for choosing to place Ma in GP2 and not give the same opportunity to Rossi. However, it is important to take a step back and look at the whole picture.

Firstly, the team should be given credit for its continuing commitment to Rossi. While marketing benefits to the team as well as the partnership with General Electric come into consideration, Rossi is first and foremost a talented young driver who’s shown the potential to be an F1 driver in the future.

Granting him regular running in Friday practice sessions is a step up from before, and it should be noted that each time he will be taking the place of a driver paying what must be something in the region of ?10 million or more to race for the team.

It seems he won’t be racing anything this year, and that is a shame, particularly after it seemed a given that he was going to race for Caterham in GP2 this year (particularly thanks to Twitter comments to Rossi from GP2 team principal Nino Judge). But rather than it being a reason to criticise Caterham, this move is really another sign of the sorry state that GP2 is in. If Rossi were to run in GP2 it would have required substantial investment that was evidently not deemed to be worth it. When Tony Fernandes has funded the F1 team largely out of his own pocket for the first three years and then selected two race drivers based on the amount of financial support they can bring, you can understand why they were unwilling to spent up to ?2 million on running Rossi in GP2 for a year. Yes, GE have plenty of money, but what exactly are they going to gain from paying for Rossi’s place when the exposure from GP2 is worth so little?

Caterham are the only Formula 1 team running a squad in GP2, and when it’s not deemed worth it to pay for their protege to race there, you can see why. Cynics would say Caterham’s GP2 team was only set up to make a profit, but given how much GP2 teams are struggling to find drivers who can simply cover their costs – see the impending departure of frontrunners iSport, that wouldn’t be a particularly feasible business plan. As Will Buxton outlined yesterday, an ideal situation would be for all the F1 teams to be running a GP2 team each so the most promising 22 drivers can race. But for as long as the people in charge of F1’s revenues only care about what they’re taking for themselves, that isn’t going to happen.

Moving on to Ma, it’s good to see him racing in GP2 this year if he and the people behind him have serious ambitions to race in F1. Ideally he would have more experience in the single-seater ranks before coming into GP2, but it’s considerably better than trying to buy and F1 drive in his current state. Given that lack of experience, his placings on the timesheets at Jerez this week were commendable, running within two seconds of the fastest driver throughout, and not far away at all from the only other real GP2 novice, Robin Frijns. It’s difficult to know whether that will necessarily translate to qualifying in Malaysia exactly three weeks today, but if so, he would be well on the pace and should only get better with some more practice.

I’m nowhere near suggesting Ma is worthy of an F1 seat, but he seems good enough to race in GP2 and he will now have to show he is worthy of consideration for a place in F1 – bear in mind that, however much money they might have, all of this year’s GP2 graduates in F1 won at least two races last year. Things will have to get really desperate for Ma to get a chance unless he proves himself in GP2.

All in all, Caterham are not paying more attention to Ma than they are Rossi. It’s just that Ma can pay the high GP2 costs and Rossi cannot.

Bianchi gets F1 race chance with Marussia in place of Razia