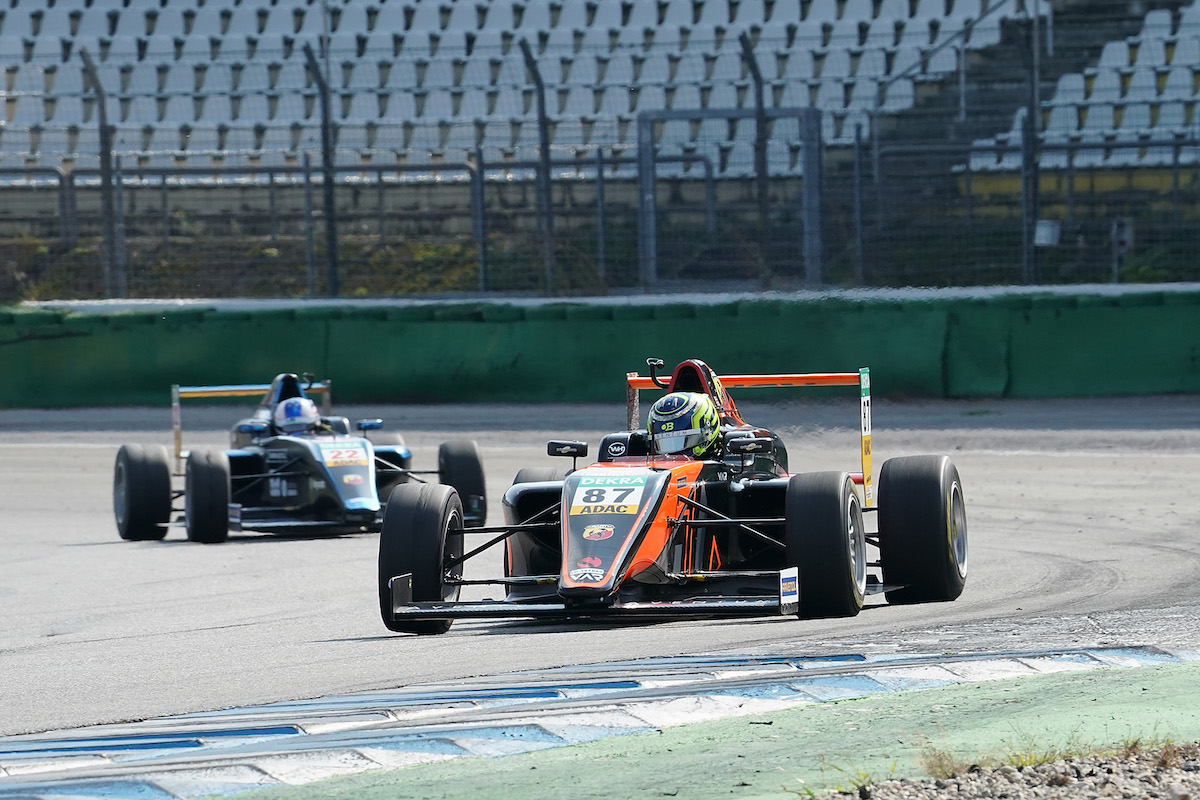 Victor Bernier inherited victory after Ollie Bearman was penalised for a last-lap collision with title rival Tim Tramnitz in the first race of the penultimate round of the ADAC Formula 4 championship at Hockenheim.

Van Amersfoort Racing driver Berman had taken the lead from a fast-starting Tramnitz on the first lap, sweeping around the outside at the hairpin. Bearman managed to retain the lead despite two safety car periods with the two leaders quickly pulling away from the field on each occasion.

Tramnitz appeared to have the quicker car but was unable to find a way past his British rival. On lap 12 he tried an optimistic lunge to the inside at the hairpin, leaving his braking far too late, locking up and running wide. However, by the start of the last lap he was again on Bearman’s tail.

Bearman held off a move into the hairpin but coming into the Mercedes Curve Tramnitz made a last minute attempt to pass on the inside, but Bearman’s defence left insufficient space. The two collided and Tramnitz ran wide, dropping behind Victor Bernier (R-ace GP) but managing to hold onto third position to the finish.

Afterwards, Bearman was given a five-second penalty for the collision that dropped him to sixth in the results and promoted Bernier to the race win. Bearman’s points lead over Tramnitz is now 25 points rather than 45.

Pole-sitter Alex Dunne (US Racing) had a race to forget. Too much wheelspin off the line dropped him to third on lap one before an off entering the stadium section demoted him to sixth. His race ended on lap six when he was clipped by Nikita Bedrin, ending up in the barriers at the entry to the pits straight and bringing out the safety car for the second time.

Luke Browning had climbed to third in the early stages but was forced to cede position to Joshua Dufek for an earlier collision. Unfortunately for Browning, Bernier had in the meantime got past Dufek, so he ended up ceding two places. He recovered on the last lap to take fourth at the flag, only to later have 1s added to his race time and be demoted back behind Vlad Lomko and Dufek.

Apart from Bernier, R-ace GP had a disappointing race with Sami Meguetounif spinning off on lap one to bring out the first safety car, Marcus Amand retiring on lap 12 and guest driver Levente Revesz running last throughout.