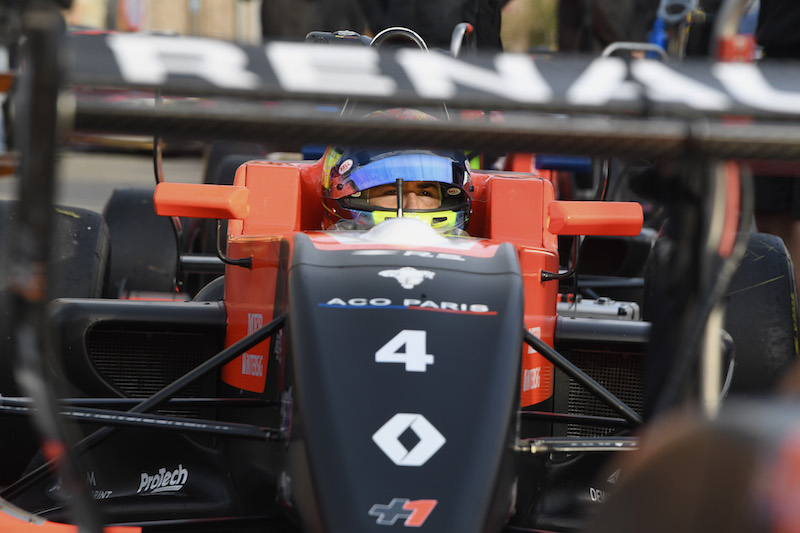 Gabriel Aubry passed Sacha Fenestraz on the opening lap to win the second Formula Renault Eurocup race at Spa-Francorchamps, with the championship leader falling to third after a failed attempt to fight back late on.

Aubry grabbed the lead from pole-sitter Fenestraz on the run up to Les Combes on the opening lap, as behind a big crash for Gilles Magnus at Raidillon triggered a safety car.

At the restart 10 minutes later, Fenestraz got alongside Aubry into Les Combes but the Tech 1 driver held the lead on the inside line, just as he did when they next went side-by-side with five of the allotted 25 minutes remaining.

Two laps later, Fenestraz was once more on the outside and this time tried to carry more speed into the corner in order to get ahead, but he ran wide and rejoined in third behind Max Defourny.

On the next and final lap, Fenestraz and Defourny went side-by-side but the Belgian stayed ahead on the inside, finishing 0.633 seconds behind winner Aubry.

Defourny had spent much of the race in fourth before passing R-ace GP team-mate Robert Shwartzman at Les Combes with three minutes remaining.

Shwartzman then came under attack from Max Fewtrell and was passed by the Briton into La Source on the last lap, only to get back in front down the Kemmel Straight.

Thomas Randle finished sixth in front of Will Palmer, who is now 47.5 points behind Fenestraz but will still be in mathematical title contention at the final round at Barcelona whatever happens in the third Spa race.

Yifei Ye slipped back from third on the grid to finish eighth ahead of Neil Verhagen and Henrique Chaves.

Northern European Cup contender Magnus crashed after he tried to pass Verhagen in Eau Rouge on the opening lap, only to be forced wide and into a spin, sending him across the track and into the barriers hard.

In his absence, Charles Milesi battled Bartek Mirecki for the NEC win, with Milesi taking it in 22nd overall – three spots in front of Michael Benyahia and Theo Coicaud – after Mirecki slowed and fell to the back.