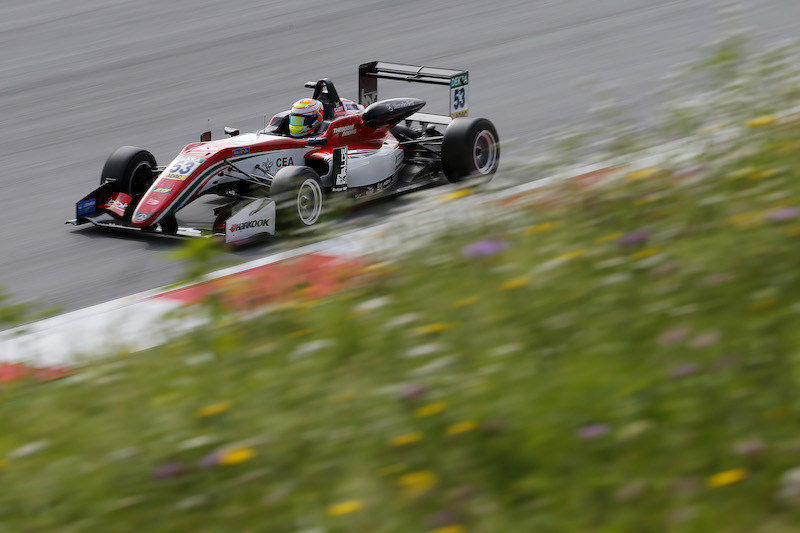 Eriksson was the strongest at the start, immediately drawing alongside front row man Gunther and then sweeping round the outside of him at Turn 1.

He then attacked poleman Ilott, nosing ahead very slightly at Turn 3 and running alongside till the cars reached Turn 4 and Ilott?s inside line became superior.

Norris had the weakest start of the quartet, dropping behind the impressive Tadasuke Makino at Turn 1 and failing to reclaim the place throughout the rest of the lap.

As the race progressed the top five started to spread out, although Ilott stayed within sight of Eriksson before winning by 1.8 seconds, with Gunter a lonely third.

Makino, who since returning from his Norisring crash has been a points regular, had dropped over seven seconds to Ilott but had kept Norris half a second behind for much of the race.

On the penultimate lap Norris decided to push, attacking at Turns 2, 3 & 4 before pulling off a stunning move at the high speed left-handed Turn 5 to steal fourth.

Norris?s late move for fourth means his championship lead over Gunther is reduced by three points to 70, with the Briton needing a 75-point margin leaving the Red Bull Ring to be crowned champion.

On lap four of 25 the battle for sixth place between Nikita Mazepin and Harrison Newey ended prematurely when they made contact at Turn 3 when Mazepin went to defend the inside.

Mazepin retired immediately, while Newey dropped to the back of the field and ran a lap down till his Van Amersfoot Racing team called him to the pits to retire him near the end of the race.

Jake Hughes, who started last due to a engine change penalty, overtook seven people in two laps to move up to 13th, and then gained 11th after the Mazepin-Newey tangle.