written by Aditya Banerjee 3 May 2015 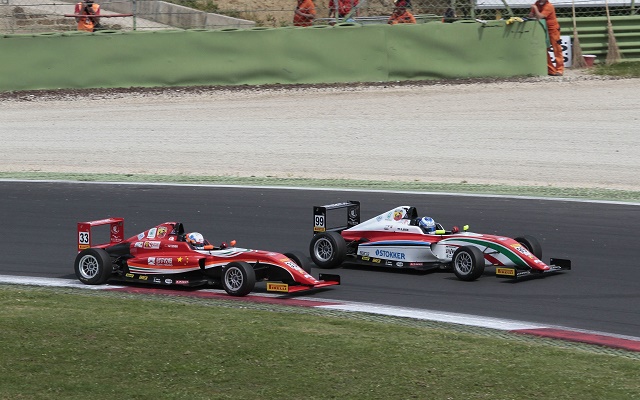 The 17-year-old started only fourth on the grid, but made a strong getaway to move into second at the end of lap one. He latched straight onto his teammate’s tail and subsequently shadowed him, before getting past on lap nine.

Zhou did not give up the pursuit and kept on pressuring his teammate, but Aron was able to hold on to take his second victory of the weekend by 0.684 seconds.

The race saw a long battle for the final podium spot behind Joao Vieira and David Beckmann. The pair were line astern until lap 13 when Beckmann tried to go around Vieira’s outside and the Brazilian used up the entire track width to defend, hitting Beckmann into a spin.

Matteo Desideri took advantage and passed his Antonelli teammate right afterwards, and a drive through penalty for Vieira?meant he only finished 12th.

It was far from easy going for the other Mucke drivers as well. Thomas Preining retired after attempting an ill-fated late dive up the inside of Nico Rindlisbacher. Robert Shwartzman had a coming together with Giuliano Raucci, leading the latter to retire early, while he himself finished a lap down.

Mauricio Baiz had a lonely run to a personal-best result of fourth ahead of a recovering Beckmann, while Jenzer’s Lucas Mauron stole sixth on the last lap from Kevin Kanayet.?Raul Guzman, Marino Sato and Diego Bertonelli completed the top ten.