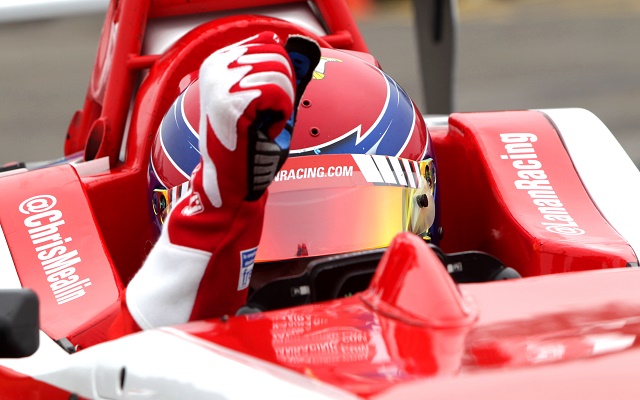 BRDC F4 championship leader Chris Mealin became the first repeat winner of the 2015 season in race three of round two at Rockingham.

Mealin drove a stellar race, punctuating it with a surprise last-lap overtake on teammate Rodrigo Fonseca to claim the win.

It was a Lanan Racing 1-2-3 on the grid, after Mealin fended off Sebastian Lanzetti and then pulled off an audacious move on fellow Lanan driver Jack Bartholomew, the three white cars ran in formation.

But all three were fighting hard and Bartholomew soon ran wide, forcing Sean Walkinshaw Racing’s Jordan Albert onto the grass.

They were both passed by Lanzetti and Akhil Rabindra, but the former then appeared to hit the latter, resulting in a puncture for the Indian and a broken front wing for the South African.

With Lanzetti losing time, Bartholomew soon moved back through – but not before Zubair Hoque snuck past to claim third.

Albert, meanwhile, had another off-track excursion and was then taken out by Ameya Vaidyanathan, who tried to block him off.

The resulting safety car proved a welcome break for Mealin, who was all over Fonseca for several laps but ended up dropping off, before being caught up by the stoppage.

And, while Fonseca nailed the restart with two laps to go, Mealin was back on him in now time and was through in spectacular fashion coming out of the oval.

Hoque calmly collected his first podium in cars in third place, ahead of Bartholomew and Tom Jackson, who muscled his way to fifth from 16th on the grid.

Jack Lang took sixth, ahead of top HHC finisher Sisa Ngebulana and his teammate Will Palmer.