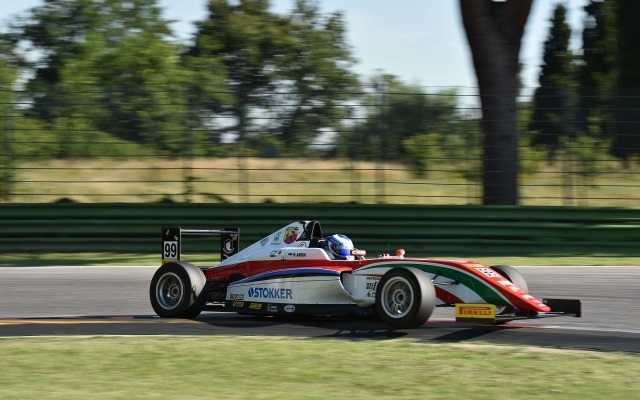 Estonian Ralf Aron converted his first pole position of the weekend into a victory in Italian F4 at Imola to retake the championship lead from teammate Guan Yu Zhou.

The Prema driver had a good launch off the line, doing just enough to keep the aggressive-starting Ferrari junior Zhou at bay.

As the race went on, Aron established a safer lead, which he maintained until the checkered flag.

After the opening laps, Zhou had to switch focus from attacking Aron to defending as Robert Shwartzman put some pressure on the Chinese driver.

However, the Russian was not able to make a serious move and the duo completed the podium in an unchanged order.

Mauricio Baiz managed to keep up the pace of the leading trio, however, he was forced to serve a drive-through penalty for a jump start, which put him out of contention.

As a result, the Venezuelan’s teammate Marino Sato inherited fourth after overtaking Bar Baruch, who had to settle for fifth.

Despite lining up third on the grid, a bad first lap saw Marcos Siebert dropping down to eighth from where he could only recover to sixth.

Giuliano Raucci secured seventh ahead of David Beckmann, who completed a fantastic recovering race as he had to start from the back of the grid, having been excluded from the qualifying after technical irregularities.