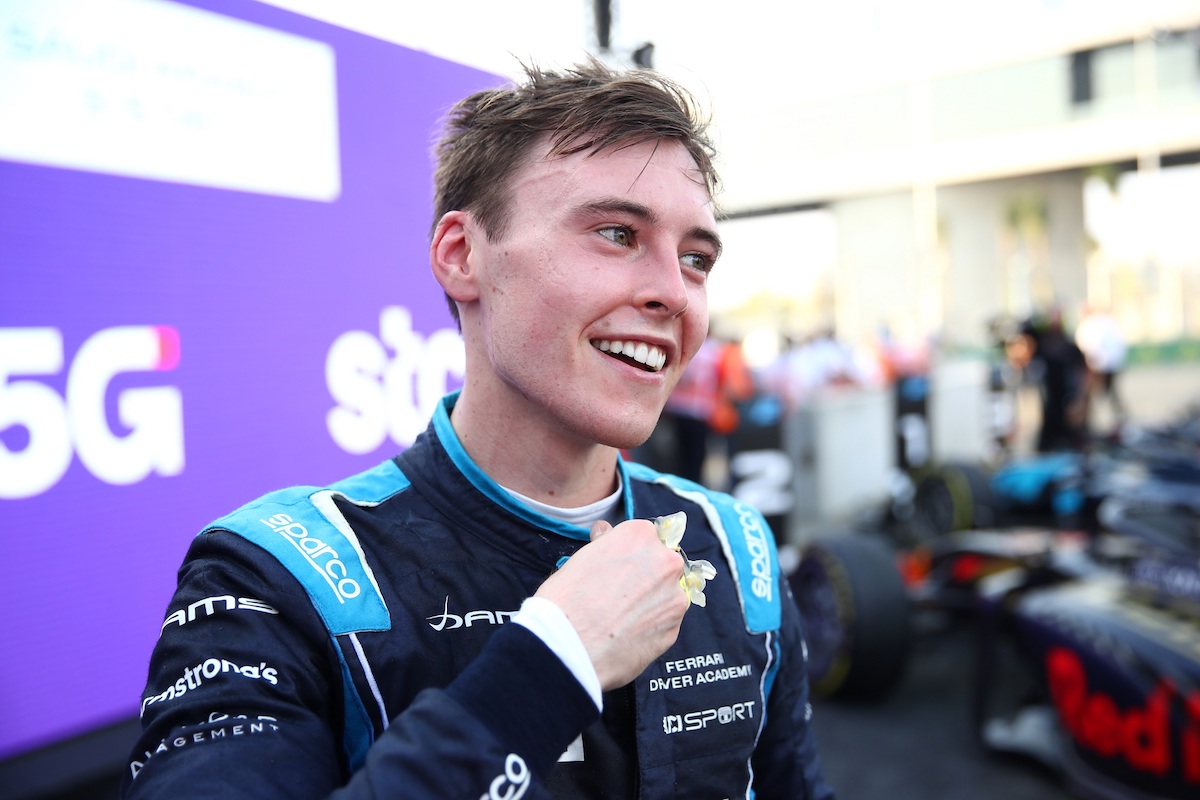 Ferrari junior Marcus Armstrong says his maiden Formula 2 win in the opening sprint race in Jeddah was a reward for the work done by his DAMS team during a difficult 2021 season.

Armstrong got the jump on reversed grid polesitter Liam Lawson at the start of the first ever race on the new Jeddah track, and fended off pressure from his fellow New Zealander in the final corners of the race.

The result comes after what Armstrong described following the race as a “tough 18 months” in F2 where he has struggled to recreate his form in lower categories. He lies 12th in the points after his Jeddah win, which was only his fifth points finish of the season and the first victory for DAMS this year.

“It feels fantastic,” Armstrong said in the post-race press conference. “Because it’s been sort of a tough 18 months in general, so to finally get a trophy, let alone a first place one, it feels good definitely. Also to see the smile on a lot of my engineers’ faces and my mechanics as well, it’s a great reward for a lot of work that hasn’t really been rewarded so far this season.”

Armstrong started the race from the dirty side of the grid in second place and was surprised by the way he managed to take the lead from Lawson.

“I wasn’t expecting to out-do Liam the way I did, just due to the fact that the left-hand side of the track is quite dirty seeing as no other cars have ever raced here,” he said. “So I think that’s a sentiment to what my engineer Thomas [Zanin] managed to do, because he’s been working very hard on just perfecting the clutch mapping and the very small, simple, boring things, but obviously it pays off ultimately.

“And as well, I think that we were lucky not to make contact at turn one. Because I’m sure he was on the limit of the grip under braking and I certainly was as well. Two Kiwis going wheel-to-wheel at turn one, it was getting dicey, but it was cool.”

Hitech’s Red Bull junior Lawson added: “He’s not wrong, it was pretty close. The start wasn’t so good for us. Actually, honestly, it wasn’t a bad start, the initial launch was good and then I got a little bit of wheelspin, and I went to close the door and there was a point where I thought I maybe could do it, but I didn’t want to get a puncture or obviously have contact before turn one that early in the race, so I gave him some space.

“I saw the huge dust cloud come up from your car on the inside, and then into turn one tried to stay next to Marcus but ended up cutting through. And again, played it a little bit safe. I could have kept going and stayed in front, but I gave the position back just not to risk any penalties.”