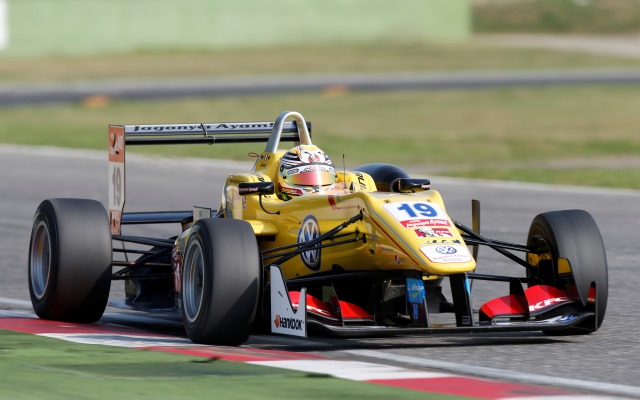 Antonio Giovinazzi will continue in the FIA F3 European Championship this year with Carlin.

The Italian, who finished sixth in the standings last year, retains the support of KFC Indonesia from the family of his long-time team-mate Sean Gelael.

Gelael, who was 18th in F3 in 2014, moves up to FR3.5 with Carlin this year and although a similar move was rumoured for Giovinazzi, the more experienced Tom Dillmann has been brought in to the scheme as Gelael’s team-mate.

“I?m very excited to have another season with Carlin in F3,” said Giovinazzi.

“We had a good season last year, we finished on a high with some very good results. I go into 2015 with the championship definitely the aim and it?s great to have the same team around me to do that. Thanks of course to Jagonya Ayam for their amazing support once again, without which this wouldn?t be possible.?

Trevor Carlin added: ?Antonio should be seen as a real contender this season. He really matured as a driver last year and overcame some issues to finish the season on a high. We?re proud once again to be flying the colours of the Jagonya Ayam brand in Formula 3 and look forward to another season of racing winning success.?

Giovinazzi won the Formula Pilota China title in 2012 in his first year out of karts and was then British F3 runner-up in 2013. Last year, after a slow start, he claimed two wins and four other podium finishes in the final four rounds.

With the rest of the top eight finishers in European F3 last year unlikely to return, Giovinazzi will start as a title favourite. His former Carlin team-mate Jake Dennis – ninth in 2014 – has switched to Prema Powerteam for the coming season.

Giovinazzi is Carlin’s fourth driver announced for the 2015 season, joining Gustavo Menezes, George Russell and Ryan Tveter. They are expected to run six cars in total.