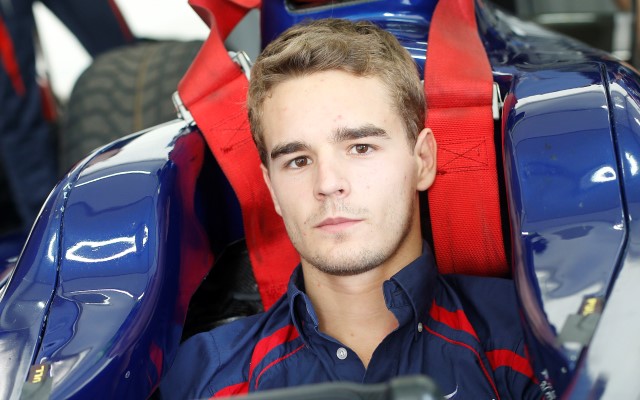 Tom Dillmann and Sean Gelael will race for Carlin in this year’s Formula Renault 3.5 Series as the team makes its return to the category after a year away.

Gelael makes the step up from the FIA F3 European Championship with the British squad. The Indonesian finished 18th in the standings last year with a best finish of sixth.

Frenchman Dillmann finished tenth in the GP2 standings in 2013 but was left without a full-time seat for last year. He did get a podium on a one-off outing for Arden in Barcelona, and made three further appearances later in the season with Caterham.

He has brief past experience with Carlin, having contested the opening round of the 2011 GP3 series with the outfit, claiming pole position and a podium in the process.

Carlin took Mikhail Aleshin and Robert Wickens to the FR3.5 titles in 2010-11 but withdrew last year after being unable to attract drivers with the necessary budget.

?It means there will be some continuity, although there will obviously be some new people and of course new challenges in FR3.5. Having had the opportunity to test a FR3.5 car I?m very excited about the season ahead. It?s quite a step up in power from Formula 3 and we visit some amazing circuits throughout the season. I can?t wait for the season to get underway now.?

Dillmann added: ?I?m delighted to be joining Carlin for the FR3.5 season and want to thank Jagonya Ayam for this amazing opportunity. I?m confident that we have a good team around us and I look forward to showing what we capable of once the season gets underway.?

Trevor Carlin added: ?We are delighted that Jagonya Ayam have chosen to stay within Carlin. Sean demonstrated real progress last season and developed as a driver. We?re excited to take him up to the next step in his career now and continue that progress in FR3.5.

“Tom brings a wealth of experience to the team and we know first-hand his talent and pace. He will be a great asset and we look forward to challenging for race wins from the start. We?d like to thank Jagonya Ayam for their continued support and partnership.?

Tom Blomqvist had initially looked set to move up to FR3.5 with Carlin having finished runner-up in F3 with the Gelael family’s KFC Indonesia backing.

However, the Briton’s absence means he now looks likely to move into the DTM with BMW after being one of several young drivers to test with the German marque last year.

An FR3.5 seat with another team had also been rumoured for Gelael’s long-time team-mate Antonio Giovinazzi, but although the Italian will continue as part of the Jagonya Ayam setup, he will now remain in F3 with Carlin for another year instead. The Italian finished sixth in the series last year.