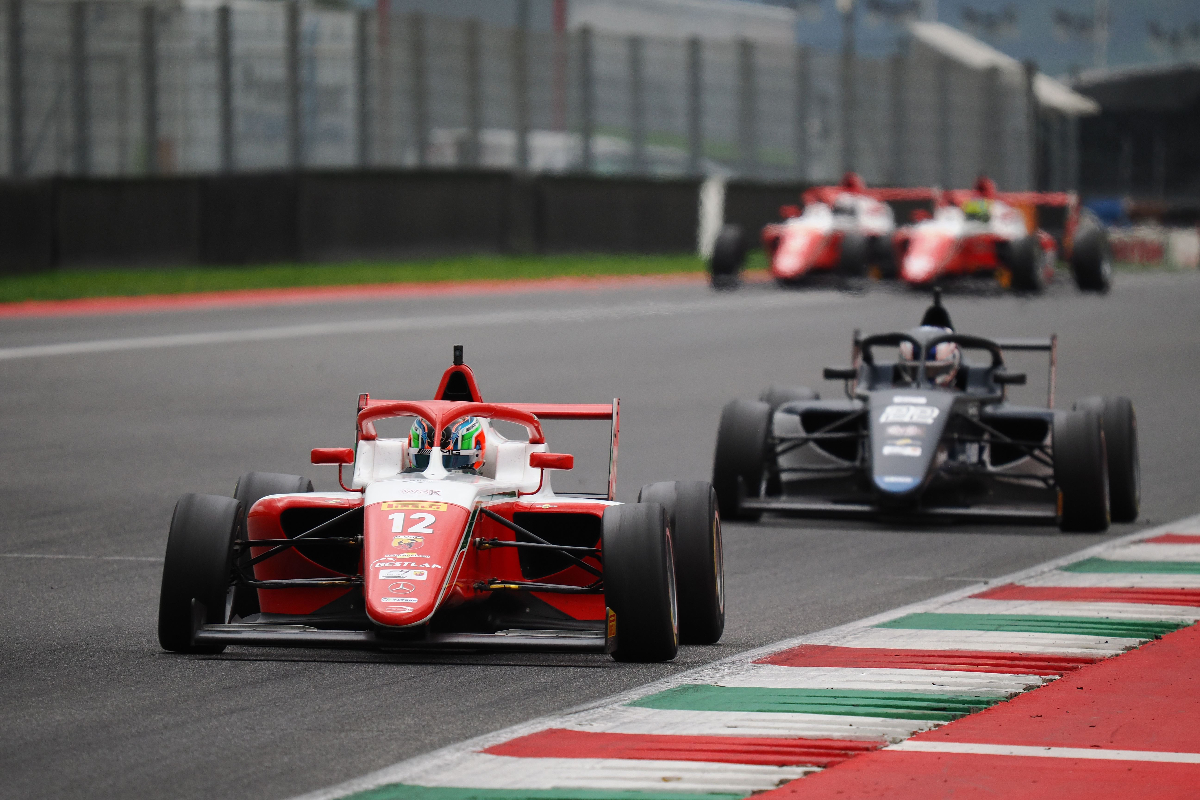 Having wrapped up the Italian Formula 4 title in race one, Andre Kimi Antonelli took a dominant 12th win of the season in race two at Mugello.

British F4 champion Alex Dunne got the jump on Rafael Camara for second after a safety car restart brought the field together, extending his advantage over the Brazilian in the fight for the championship runner-up spot.

Antonelli made another perfect launch to hold the lead into San Donato at the start as his fellow front-row starter Camara held off the battling US Racing pair of Kacper Sztuka and Dunne.

Behind them, Prema duo Charlie Wurz and Ugo Ugochukwu immediately resumed their wheel-to-wheel dice from race one.

Dunne found a way past Sztuka on lap three to take up the chase of Camara in second, closing to 0.4 seconds before the safety car was deployed to recovered the beached R-ace GP car of Giovanni Maschio who had come together with Monlau Motorsport’s Niels Koolen.

Antonelli mastered the restart, backing up the field before making his move through Biondetti. However, this allowed his pursuers to get a run at him down the pit straight, Camara pulling alongside but unable to make the move around the outside of San Donato.

As Antonelli asserted himself in front, Dunne and Sztuka were able to close onto the tail of Camara. The Pole tried to make a move into the first corner but his team-mate held him off.

The safety car was soon back on track, as Koolen was involved in another incident, crashing into the tyre barrier as he tried to avoid a spinning Taylor Barnard.

Racing resumed with five minutes on the clock. Antonelli kept the same strategy for timing his launch, giving everyone a full speed run down into turn one. With Antonelli clear, Dunne swerved to the inside to make a move on Camara, taking the place and immediately pulling 0.8s clear.

Dunne, however, could do nothing about Antonelli and the Mercedes-AMG Formula 1 junior finished 3.3s ahead as Dunne backed off on the final lap.

Red Bull junior Arvid Lindblad once again stalled at the start, having qualified as the fastest Van Amersfoort Racing driver in seventh, before losing his front wing as he made contact with Andrea Frassineti at turn five, forcing him back to the pits to retire.