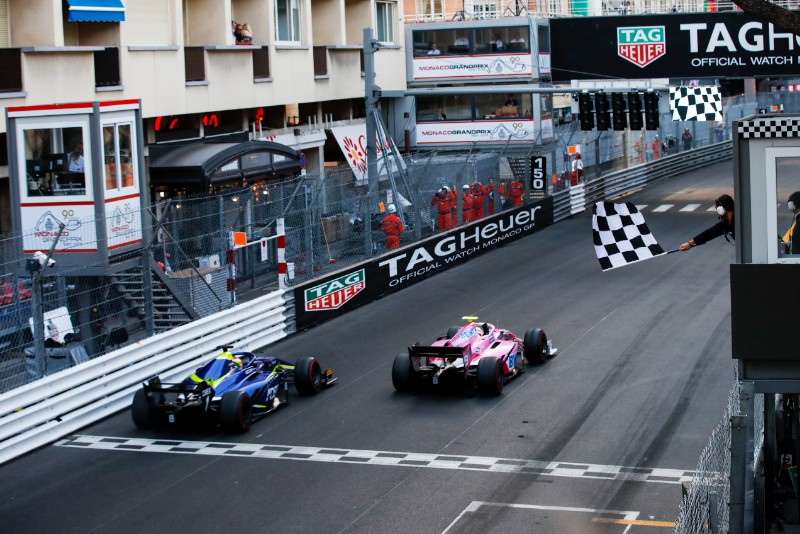 Anthoine Hubert took his first Formula 2 victory in a photo finish with Louis Deletraz in the Monaco sprint race.

Carlin’s Deletraz pulled alongside Arden driver Hubert on the run to the finish line, and was halfway alongside the leader as they took the chequered flag. The gap after 30 laps was just 0.059 seconds.

After passing the cameoing Artem Markelov on the opening lap, Virtuosi Racing’s Guan Yu Zhou held onto third to complete the podium.

Racing was disrupted by two safety car periods. The first came after Zhou’s team-mate Luca Ghiotto made contact with Hubert’s team-mate Tatiana Calderon, sending her into the wall at Mirabeau.

Hubert made a good getaway on the restart, but his gap was nullified again when Ghiotto this time made contact with Markelov’s MP Motorsport team-mate Mahaveer Raghunathan as he tried to make a move up the inside of the Indian at the hairpin. Both drivers came to a stop on track, bringing out the safety car.

This time Hubert wasn?t able to shake off Deletraz on the restart, and was kept under pressure until the end.

Markelov finished fourth, a long way ahead of Campos Racing’s Dorian Boccocalacci, who led a train of six cars.

The long line of drivers included championship leaders Nicholas Latifi and Nyck de Vries. Seventh place for de Vries netted him two points, and although Latifi was a usually pointless tenth, Prema’s Sean Gelael was not eligible for fastest lap points and so the Canadian inherited them. Latifi’s points lead has been reduced to one point.