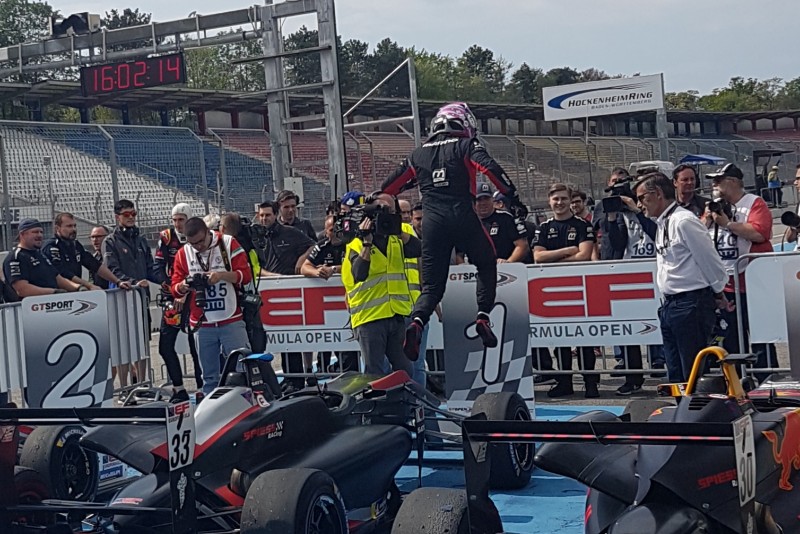 Marino Sato took a ‘grand slam’ of victory, pole, fastest lap and all laps led in the first ever Euroformula Open race at Hockenheim, moving him into the championship lead.

The Motopark driver’s race “went as planned” from the first lap, launching away from pole and avoiding the battle for position behind between Double R Racing duo Jack Doohan and the fast starting Linus Lundqvist.

Lundqivst couldn’t keep up with the front two, and he was soon passed by Sato’s team-mate Liam Lawson, who had started from sixth as the result of a three-place grid penalty for clashing with his other team-mate Julian Hanses at Pau.

After clearing Lundqvist, Lawson then tracked down Doohan and eventually completed a pass on lap 10, but returned the position a few laps later after spinning at Turn 1. He somehow didn’t damage his tyres, despite having them locked up for the full 360? of the spin, and tracked Doohan to the chequered flag.

A poor start limited Yuki Tsunoda to fourth, having also cleared Lundqvist once the Double R cars started to struggle for pace, and he completed an all-Red Bull rookie podium behind Doohan and Motopark team-mate Lawson.

The battle for seventh to ninth place was one of the most dramatic of the race, although it failed to include Carlin’s Teppei Natori and Billy Monger, and Teo Martin’s Aldo Festante after they all fell down the order at the start of the race.

Festante, who starred in qualifying, retired from the race on lap two and is under investigation for an incident involving Natori.