Another commanding win for Stroll in Spielberg F3 race three 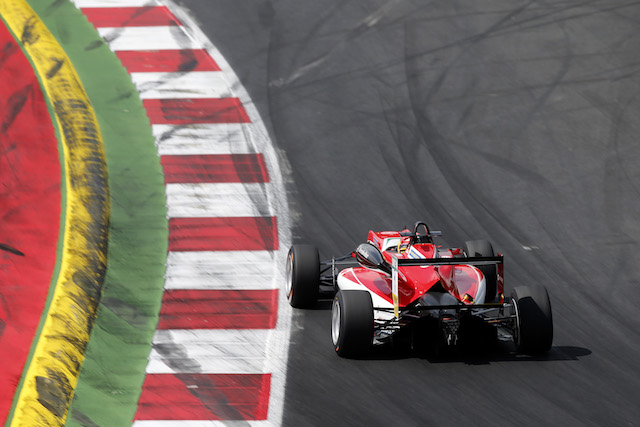 As in race two, Stroll led from the front but was challenged initially by his nearest points rival?Callum Ilott.

After Ilott, like most of the field, received a warning for exceeding track limits (having lost second after race two for the same reason) Stroll was able to pull away, winning by 4.8 seconds after setting the fastest lap on the final tour.

The Canadian, one of the only drivers to not receive a warning or a penalty during the race,?stretches his championship advantage over Ilott to 38 points.

George Russell started the race just a point behind Ilott but effectively ended his race when he clattered into?David Beckmann at Turn 2 on the first lap when around half a dozen drivers fought for third.

A safety car was required on lap three when?Mikkel Jensen was forced into the gravel on the approach to Turn 2 by?Alessio Lorandi, a move the Italian was later penalised for.

The multi-car fight for third was settled at the restart.?Niko Kari got a poor launch?and in trying to defend the inside from?Joel Eriksson, he ran deep.

Maximilian Gunther got a cleaner run through the corner to take third, and resisted the attempts of?Ben Barnicoat to go around his outside at Turn 3 to secure his second?podium of the weekend.

Barnicoat and fifth-placed Sergio Sette Camara were investigated for potentially overtaking each other under the safety car, but no action was taken during the race.

With Van Amersfoort Racing team-mates?Harrison Newey and?Anthoine Hubert?falling out of the top 10 as two of?those receiving?track limits?penalties, Beckmann was on course to salvage the final point behind?Ralf Aron, only for the German to get a time penalty for a similar offence.

That left?Nick Cassidy?to take 10th on a very quiet weekend for the Kiwi, who was only present in Austria because a clashing Super GT race was postponed by an earthquake. He was the last of the finishers?not to be penalised, crossing the line just ahead of?Nikita Mazepin, who also received a time penalty.