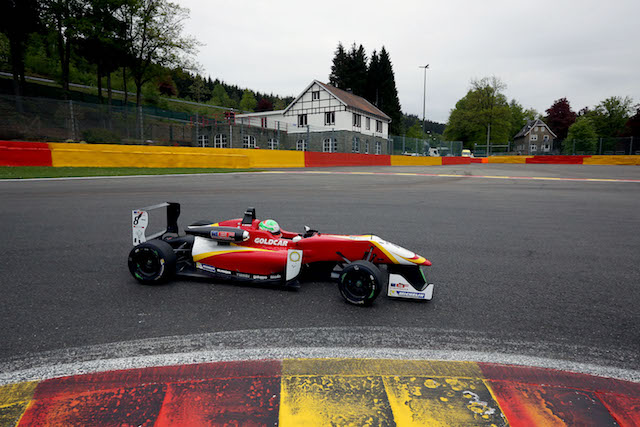 Leonardo Pulcini turned the tables on Jack Aitken?in the second?Euroformula Open race?at Spa-Francorchamps to score his second win of the season and extend his points lead.

After beating Pulcini to win?race one, Aitken topped Sunday morning qualifying to claim pole for the second race, which was held in light rain on wet tyres.

Aitken made a good start to hold the lead and looked as if he would remain ahead into Les Combes for the first time. Pulcini was persistent on the inside though, and a space opened up for him to dive into the lead as Aitken returned to the racing line.

From there, 17-year-old Pulcini led until the finish.

Ferdinand Habsburg followed Pulcini past Aitken at Les Combes, but was re-passed by the Briton down the Kemmel Straight on lap three.

Aitken closed the gap on Pulcini in the middle of the race and then again on the final lap, but couldn’t quite get close enough to challenge, ending up 1.3 seconds behind.

Sathienthirakul spun at Pouhon to lose fifth to?Colton Herta, who earlier made a fantastic move around the outside of Moreno at the Bus Stop.

Another commanding win for Stroll in Spielberg F3 race three