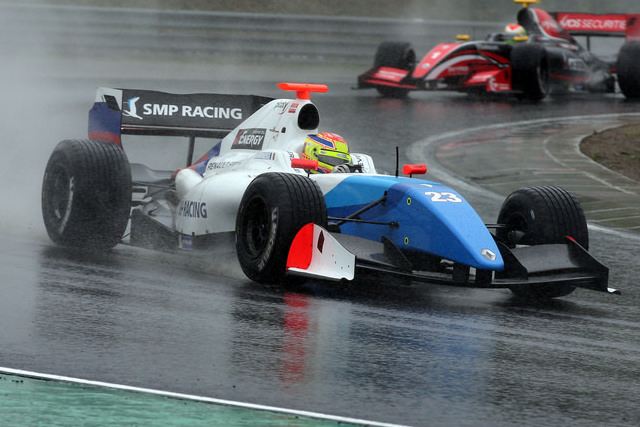 Matthieu Vaxiviere?snatched his first victory of the Formula V8 3.5 season in extremely wet conditions in race two at Spa-Francorchamps.

Vaxiviere had closed up to?his fellow Frenchman though, and did enough to force a spin from the AVF driver up at Les Combes.

Vaxiviere pushed hard thereafter and went off on the same puddle as Dillmann a lap later, but kept his car pointing in the right direction to take?a?maiden win for the new SMP Racing team by a margin of over six seconds.

The race began behind the safety car, and despite difficult conditions, the field was released after three laps, with Dillmann leading by three seconds after the first green-flag lap.

When?Matevos Isaakyan spun and stalled at Les Combes on lap six, AVF and Dillmann recognised the probability of a safety car and he made his?mandatory pitstop.

Second-placed?Roy Nissany did the same but his race ended shortly afterwards when, after the safety car was indeed deployed to recover the car of Isaakyan, the Israeli slowed in the spray at Eau Rouge and was?mounted from behind by?Johnny Cecotto, sending both cars into the barriers at speed. Both appeared to escape unharmed.

Panis had pressured Nissany for second early on – briefly taking the place at Les Combes before going off – and he led under the safety car having not yet made his pitstop. He and Binder would pit one lap after the restart.

Dillmann’s subsequent spin meant he has now failed to convert three poles into victory this year, but his advantage at the top of the standings?has more than doubled?from 17 to 35 points after?Louis Deletraz failed to finish.

The Swiss driver initially didn’t get away from sixth on the grid and then,?having?rejoined the pack for the restart, he was unable to?complete the first lap of racing.

Alfonso Celis would steer clear of trouble to take his maiden series podium in third while 18-year-old Euroformula Open champion?Vitor Baptista?scored his best finish of fourth despite having thrown away his fifth-place starting position when he went very deep at La Source?at the initial green flag, dropping to the rear of the field.

Beitske Visser and?Pietro Fittipaldi both stopped at the pit entrance before the end of the race, while race one winner Egor Orudzhev‘s hopes of fighting back from 14th on the grid were ended when Cecotto was released into his path at an early pitstop, causing his retirement.