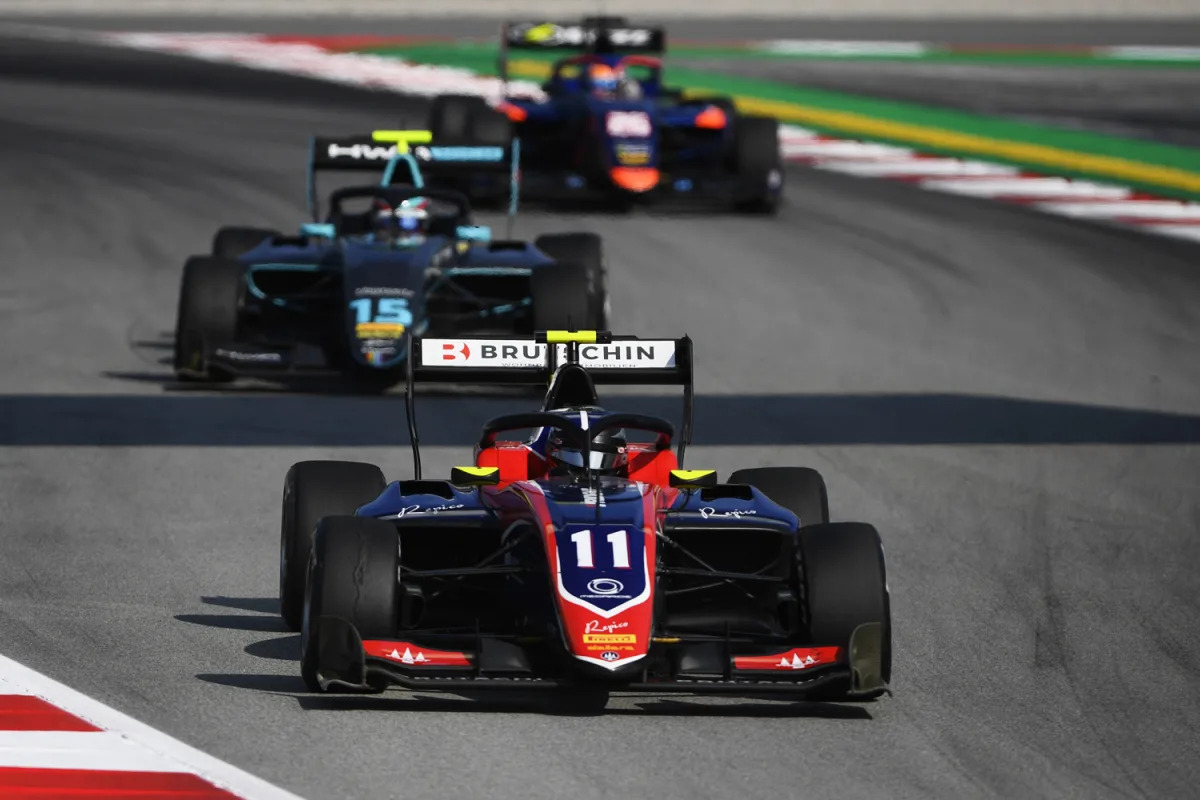 Drawing conclusions from a field of 30 cars in a spec series is challenging at the best of times, and the 2020 FIA Formula 3 Championship’s frantic run of back-to-back rounds has made it harder to digest the data

So far, FIA F3 has held 12 races at four different circuits, and there another six to go at three more tracks – one of which is entirely new to the series. There have been 14 drivers who have made it onto the podium, eight of whom have won races. With one third of the season to go, now is a good time to analyse the heaps of data available and draw conclusions where possible.

For this, Formula Scout has examined 10-lap rolling averages where possible during races to measure race pace, as well as single-lap ‘supertimes’ (i.e. the average of a driver’s fastest lap from each round) from all sessions to find out the peak pace differentials between teams in qualifying and races.

The races used for the rolling averages are the first races at the Red Bull Ring, Hungaroring and Barcelona, as well as the Sunday race from the first Silverstone trip and the Saturday race at the same circuit on different tyre compounds a week later. Races have been omitted where a 10-lap run in the dry was not achievable due to weather, safety cars or other factors.

Using a rolling average rather than all non-anomalous laps from a race immediately shortens the band of data being observed, and dropping races from that equation for the above reasons means an even smaller set of results is being used too. The repeat appearances of circuits does mean more data from those venues, but it’s otherwise rather dangerous to make conclusions from this data – especially when there are ‘DRS trains’ and safety car appearances may occur when a driver is about to hit the peak of a phase in the life cycle of their Pirelli tyres.

For the outright fastest times from a weekend, free practice is used over qualifying at the Hungaroring due to the grid-setting session being a washout. One of the races there was also hit by bad weather, as was the third Red Bull Ring race. 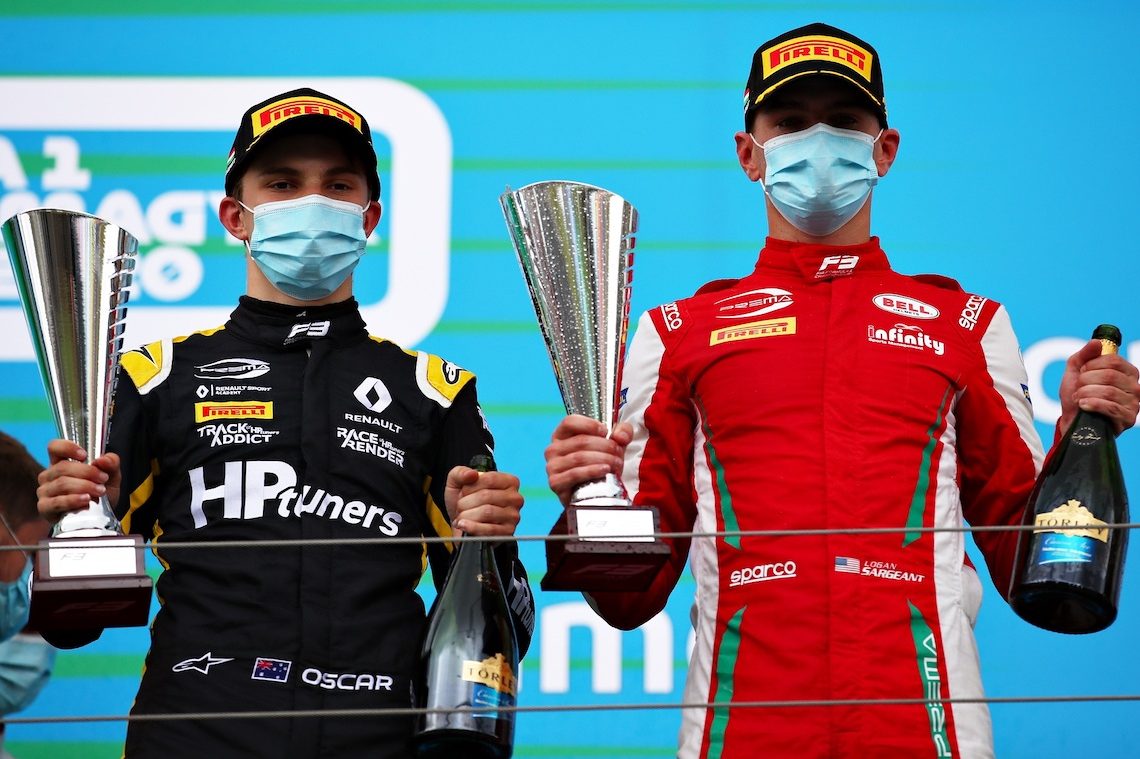 The title picture so far paints towards a Prema-only battle between Oscar Piastri and Logan Sargeant, with Hitech GP’s Liam Lawson, Trident veteran David Beckmann and rapid ART Grand Prix rookie Theo Pourchaire all within striking distance. Prema’s third driver Frederik Vesti is a bit further back after some so-so rounds and ill-fortune, but is still clear of the vastly experienced and resurgent HWA driver Jake Hughes.

Reliability has played a bigger role than expected from a spec series in the second year of use of its current car, and the challenges of overtaking using DRS to break into some rare clean air has been made harder by persistent failures of the rear wing device across pretty much every session this season. This has had a significant role in the title race, but the data doesn’t immediately tell you that, neither does it mention on-track incidents between squabbling rivals up front. With the data, here is what Formula Scout has analysed from crunching the numbers so far.

Perhaps somewhat unsurprisingly, the Prema outfit that was so crushingly dominant last year in FIA F3 – in its maiden season no less – has retained an advantage in 2020. That has been cut somewhat, and it’s been dealt with quite a few reliability issues, but it remains the team to beat. On single-lap pace, its drivers rank first (Sargeant, 100.12%), third (Piastri, 100.38%) and eighth (Vesti, 100.47%) when omitting the unusual Hungary round, and are all in the top half of the order when putting that free practice-based round back in. In terms of fastest laps, all three drivers feature in the top four when all races are considered and are in the top five when the wet races are removed. For good measure, it also features highly on the average lap charts too, headed by a slightly surprising name…

The top times so far

The consistently quick driver with only one podium

It may be a bit of a surprise to hear that, in terms of consistency, Vesti is the fastest driver and somewhat comfortably. Vesti has just one podium to his name so far this year – from his win at the Red Bull Ring – where he received half points for it. What he has lacked in qualifying, luck and indecisiveness in battle so far in 2020, he has made up for it in terms of out-and-out speed.

On that basis, should he start to nail qualifying, Vesti could mount a very late push for a strong finish in the points. That he is, on average, 0.078% away from the pacesetters in the races taken is pretty remarkable, even if it’s a small sample set to draw conclusions from.

Trident seriously quick over one lap

The full ranking places Trident’s Beckmann at the top of outright fastest lap performance in 2020 – although that is helped by having topped free practice at the Hungaroring. Even without that, the experienced Beckmann – who wasn’t even originally supposed to race in FIA F3 this year – is still the second best on average.

To back up Beckmann’s speed, his team-mate Lirim Zendeli ranks fourth without Hungary, and second overall with it. It’s some surprise then that Trident is yet to take a pole position this year.

Where the outfit has struggled is with keeping up those performances in the races, ranking towards the upper end of the midfield in fastest race laps and average lap times for both Beckmann and Zendeli, and further down the order for rookie Olli Caldwell.

There is little denying that Charouz Racing System had three strong talents on its books before David Schumacher left the team post-Barcelona. Igor Fraga is the Toyota Racing Series champion, Schumacher impressed many in his second year of car racing in the Formula Regional European Championship in 2019, and Roman Stanek could well have been fighting for podiums and wins in FREC this year had he not left Prema pre-season.

Yet, the team has scored a solitary point courtesy of Fraga, and Schumacher has already left. Stanek has shown glimpses of huge speed in free practice, but has not been able to turn it into points off the back of qualifying performances where he hasn’t found the operating window of the Pirellis on his single attempt at a fast lap. Curiously, Fraga has never managed to improve on his free practice time in qualifying.

Across all three areas assessed, the team only just breaks into the top 20 with Stanek in single-lap pace and fastest race laps if the anomalous races are removed.

Lawson and Hughes standouts in their teams

This season is big for two drivers for some very different reasons. Liam Lawson is consistently under pressure being in the high-intensity environment of the Red Bull Junior Team, while Jake Hughes’ career is in need of a major push in what is his fifth year in single-seaters’ third tier. When compared against their team-mates, both are arguably outperforming what they have underneath them in 2020. 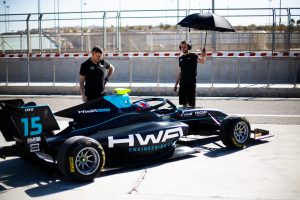 In terms of fastest race laps (when ignoring the two wets races which, admittedly, came before HWA Racelab changed its setup approach), Hughes is simply the quickest. But he’s up there regardless, which is no surprise given the speed shown in recent events.

Hitech GP’s Lawson is also right in the mix, featuring in the top two of race trim (over a stint and on outright speed) and well in the frame in qualifying too. For comparison, both of their respective team-mates struggle to break into the top 15 in any area.

ART Grand Prix has two wins and two poles, but is only thereabouts due to inconsistency, which is similar to 2019. There have been times where the team has looked mighty, and times when it has looked a bit lost at sea.

It was painfully unlucky to have had its poles translate into retirements for Sebastian Fernandez and Alexander Smolyar, but Theo Pourchaire has picked up at least some of the pieces.

Seventeen today, Pourchaire has a little bit of work to do in qualifying but he features highly in the race averages and outright speed, helped by his run to victory in the first Hungaroring race being so imperious.

Fernandez is a little bit quicker in qualifying, while Smolyar doesn’t even break the top 10 in this area despite having started on pole this year. His races hold up better though, even if the results haven’t always reflected that. 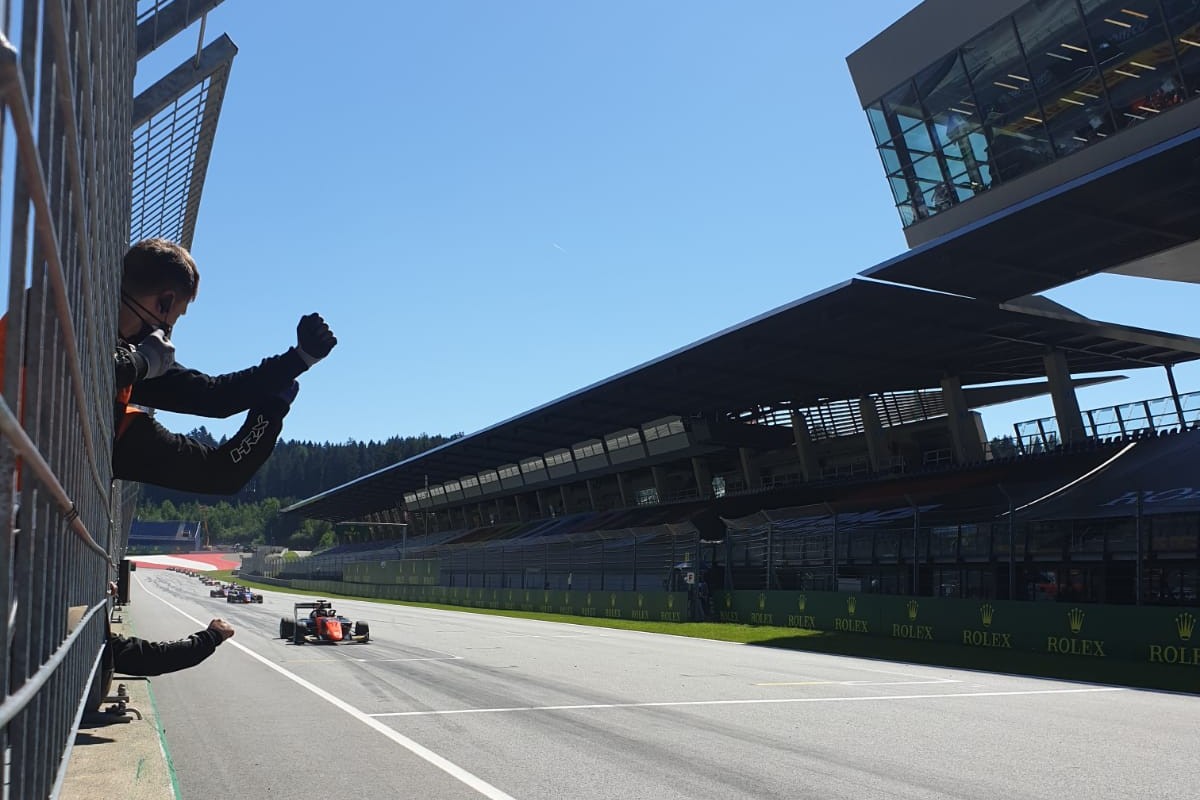 There are a few names yet to be mentioned who certainly deserve some credit. It’s easy in a 30-car field to be forgotten – especially when a strong drive to a finish outside of the points may feature very little action.

MP Motorsport’s Richard Verschoor has had the speed to finish the top 10 this year and has done so – but his team hasn’t seemingly made the expected step up the pecking order after his 2019 Macau Grand Prix win. He’s had less misfortune than his team-mate Bent Viscaal, who like Verschoor is a second-year driver in FIA F3 and looks closely matched on pace.

Alex Peroni meanwhile has blown away his Campos Racing team-mates, and is probably the only accurate barometer of Campos’s improvements since its miserable 2019. Over a race stint he’s 11th best on average, and an improvement of a tenth of 0.1s over a hypothetical 1m40s lap would put him fifth of the full-time drivers. In qualifying he’s similarly close to the front, which has resulted in averaging almost five points per race – which is the figure Campos scored in total across 2019.

Carlin hasn’t had it easy either, but has also shown vast gains. Clement Novalak’s knack for consistency, which resulted in the BRDC British F3 title for him last year, has meant he’s only gone one weekend without scoring. He pips Peroni and is just behind Smolyar over a stint, but there’s arguably more to come from the rookie as stand-in Ben Barnicoat was even quicker for the team at Silverstone.

Qualifying is his pitfall, but he’s still totally outclassed his more experienced team-mates. Enaam Ahmed was only faster than Campos’s Alessio Deledda on single-lap pace before he left Carlin, and was behind all but Stanek and Deledda on race runs. Cameron Das has fared slightly better, but is still battling with the smaller Jenzer Motorsport team rather than for any points. 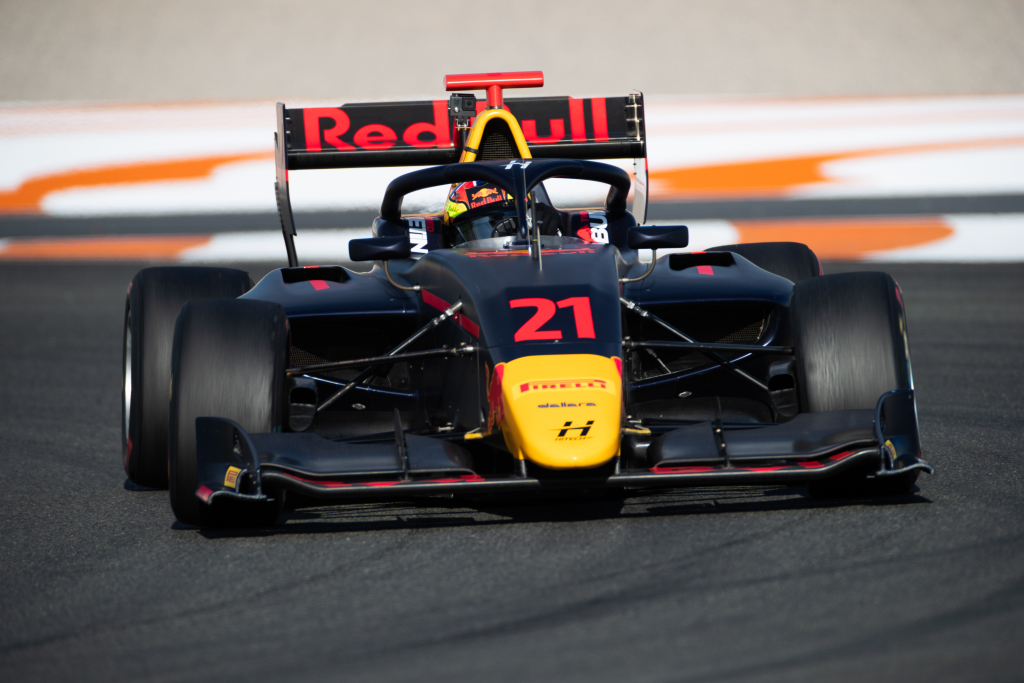 Who will be eyeing improvements?

While every driver will be looking to do plenty of homework before the next round in Belgium, there are some who must be looking at their team-mates’ performances and wondering how they can elevate themselves to a similar level.

At Hitech, Max Fewtrell’s second season has been challenging at best and the data wholly reflects that, while 2019 Italian Formula 4 champion Dennis Hauger has struggled even more from a lower base of experience. Caldwell knows where to look to bridge quite a substantial gap to Beckmann and Zendeli at Trident, while Hughes isn’t the only one to show the HWA team is quick, but his team-mates Jack Doohan and Enzo Fittipaldi are consistently having messy races.

Lukas Dunner also needs to translate his pace in Euroformula over the past two years into laptimes that match his team-mates as MP, as his half-second deficit to them is equatable to being 10 or more positions further down on the grid.