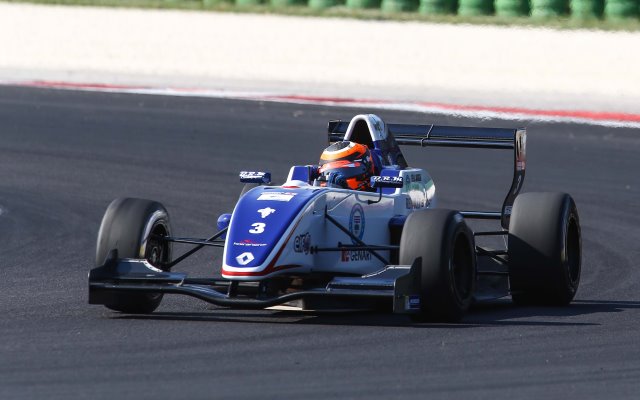 Formula Renault 2.0 Alps title chaser Jack Aitken posted the best time in practice ahead of the deciding round at Jerez.

Aitken comes into the weekend – staged three months on from the penultimate round at Misano – with a 12-point deficit to fellow Briton and Koiranen team-mate Jake Hughes.

Aitken led the morning session with a time of 1m40.571s, 0.023 seconds quicker than Matevos Isaakyan, who is a further 11 points off Hughes.

With Jerez also hosting the final round of the Eurocup season next weekend, a number of drivers are present as wildcards this weekend in preparation.

Those include Eurocup title contenders Ben Barnicoat and Anthoine Hubert, who were third and fifth fastest respectively in the opening session, split by another guest Martin Kodric.

All three are making their third and final permitted Alps appearances of the season and first since Pau in May when Hubert won twice.

Hughes was sixth ahead of the remaining two Alps title contenders, Thiago Vivacqua and Stefan Riener.

The latter is in his first Alps meeting since switching from Koiranen to Fortec, having taken in the past two NEC rounds with the British squad.

The top 10 was completed by Matteo Ferrer and Amaury Richard.

Barnicoat was quickest during the afternoon, but nine tenths down on Aitken’s morning time.

Hubert was 0.181s slower in second with Isaakyan third ahead of fellow Russian Vasily Romanov.

Richard was fifth in front of Kodric and Riener, with Hughes eighth and Aitken 11th.

Novelties for the final round include NEC rookie champion Max Defourny making his second Alps appearance with Koiranen and first since Pau.

Troitskiy entered the past two Eurocup rounds alongside Isaakyan and Vivacqua at JD Motorsport but that seat is occupied by another SMP driver Alexey Korneev, who debuted at the last Alps round at Misano.

Also making an Alps debut with GSK is Riccardo Cazzaniga ? the younger brother of GSK regular Daniele Cazzaniga ? who sits second in the VdeV Single-Seater Challenge with the team.