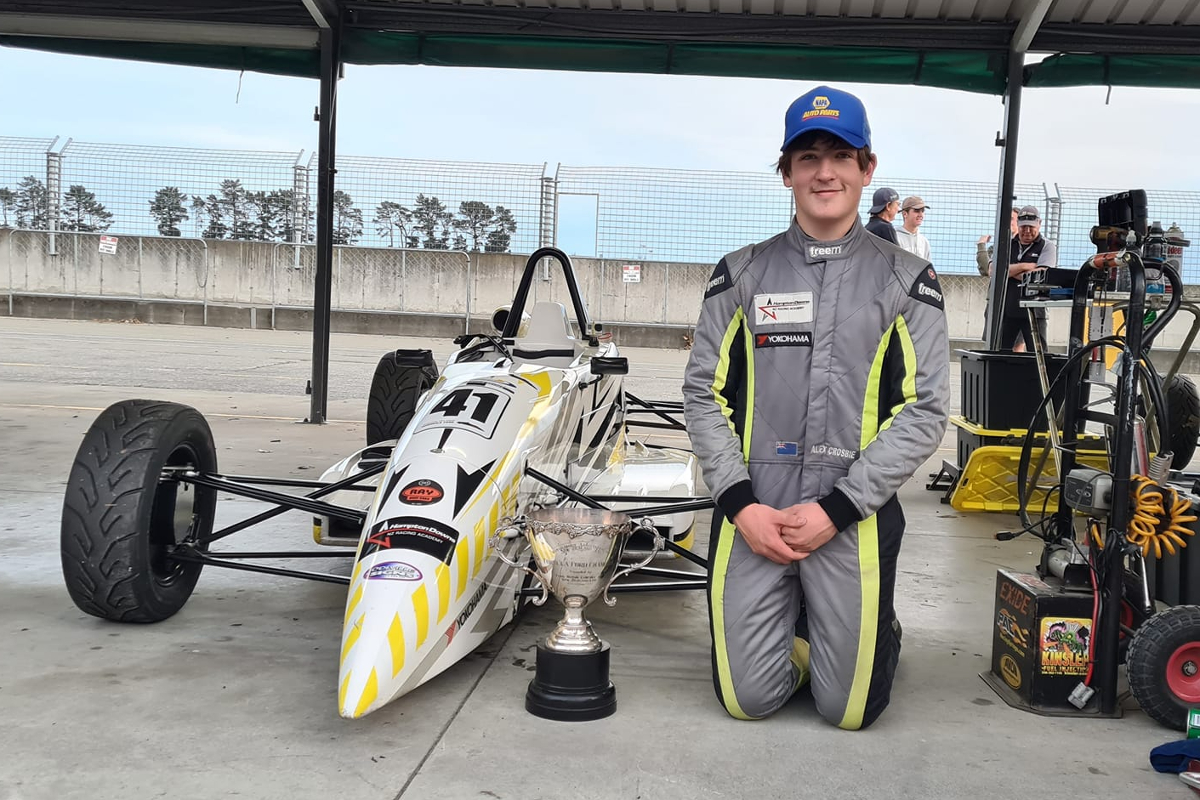 This season was shortened to two rounds due to the country’s ongoing pandemic restrictions, and team-mate Liam Sceats dominated the North Island opener at Taupo as he won all four races.

His closest opponents were South Island FFord champion Zac Christensen and series rival Crosbie, who said he “didn’t expect to be competing” for the crown this Sunday.

Christensen claimed pole by 0.641 seconds ahead of Crosbie, with Sceats in fifth behind Simon Hunter and the improving Bree Morris.

The top two qualifiers romped away in race one, while Morris dropped to eighth at the start. Sceats fought past Hunter for third on lap two but wasn’t able to break away, and Hunter came back past mid-race.

Morris meanwhile was on a recovery and was up to fifth by the penultimate lap, escaping a train of cars from sixth to 10th. She was within sight of Sceats, and passed the points leader on the last lap.

Setting the fastest lap put Crosbie on pole for race two, but he was beaten off the line by Christensen. Hunter also got by and went to pass Christensen around the outside of the Kelford Camtech hairpin. Christensen locked up and almost stopped entirely but still tagged Hunter into a spin, dropping both back.

Crosbie returned to the lead ahead of fifth-placed starter Morris and Sceats. The top three stayed together for several laps, but when Sceats found a way past Morris there was then a growing gap to Crosbie.

Eventually Morris passed Sceats again, but he slipstreamed back ahead, then she passed at the hairpin to claim her maiden podium in second while Crosbie won and became Sceats’ closest rival as Christensen retired on the last lap.

Crosbie had race three pole but bogged down at the start. Christensen and Hunter moved into first and second, retaining those positions to the finish, and Sceats got into third.

Under braking Crosbie was able to make up his lost ground and passed Sceats before the end of lap one, but Morris squeezed past Sceats and then cleared Crosbie on lap two when he locked up.

Crosbie pulled off a move around the outside of turn two, but Morris reovertook at the hairpin. The turn two move was repeated to seal third before the race ended behind the safety car due to Josh Andrew crashing.

Sceats led Crosbie by 18 points entering the finale, with Christensen 40 points back. Crosbie started on pole, ahead of Christensen, Hunter and Sceats.

The best start was made by Sceats, but he got boxed in and Christensen led into turn one. Crosbie ran in third behind Hunter, and pressured him hard.

Hunter later got a drive-through penalty for track limits abuse, but dropped to sixth before serving it, and Sceats was now stuck behind Morris in fourth but still set for the title.

“This was my rookie season in NZ FFord, so was wrapped to come away with the win,” said Crosbie, who earns a prize FFord Festival seat.