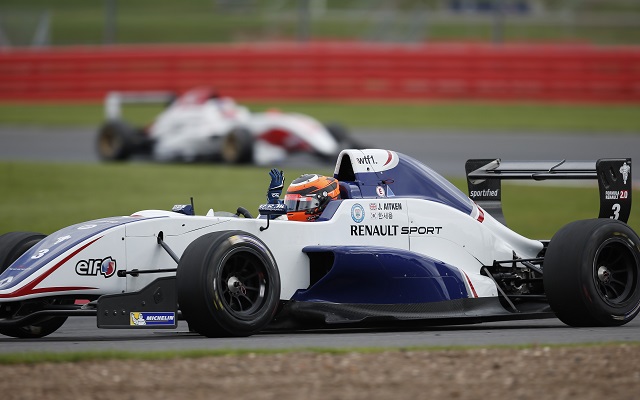 Jack Aitken was victorious in the first Eurocup FR2.0 race at the Nurburgring, having withstood race-long pressure from Ukyo Sasahara.

The Koiranen driver was into the lead at the start with a better launch than pole-sitter Louis Deletraz, who found himself down in sixth at the end of lap one.

After just two laps, the safety car had to appear on the track as a result of two last-corner incidents.

On the opening lap, Hugo de Sadeleer retired in the gravel after contact with Bruno Baptista and Henrique Chaves?with?Valentin Hasse-Clot‘s race ending at the same place next time around as he was punted off by Pontus Fredricsson.

Aitken managed to stay ahead after the restart but a train of five cars formed behind him, featuring Sasahara, Matevos Isaakyan, Jake Hughes, Ben Barnicoat and Deletraz.

Sasahara never let Aitken out of his sights and put massive pressure on the race leader but the half-Scottish, half-South Korean driver did not put a foot wrong and took the chequered flag first.

The podium was completed by Sasahara and Isaakyan with Barnicoat passing Hughes, who had to drive with damaged steering, to take fourth.

After his sixth place in the race, Deletraz continues to hold on to his championship lead but his advantage is only three, four and six points over Jorg, Aitken and Hughes respectively.