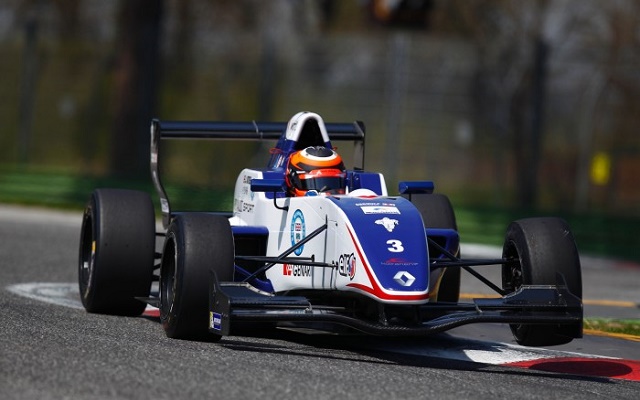 Koiranen GP’s Jack Aitken was the winner of the second Formula Renault 2.0 Alps race at Imola.

Hubert made a good start off the front row to challenge Aitken, but the Koiranen driver forced him on the outside, maintaining the lead and allowing Fortec’s Martin Kodric to steal second place.

However, Aitken would get no time to go clear of the Frenchman as Hubert was back into second almost immediately.

The Tech 1 driver stayed within a second of the race lead over the next 15 minutes, while Kodric kept up with the leaders initially only to drop off, having to defend third place. He was then passed by Koiranen’s Jake Hughes.

As Hubert attempted to reel Aitken in with ten minutes to go, he had a trip to the gravel, keeping second but losing a lot of ground to the leader.

The fight for victory was as good as over at that point, with Aitken coasting to the checkered flag.

Kodric came under late pressure from teammate Ben Barnicoat but held firm in fourth to deny the Brit.

Stefan Riener took sixth, ahead of Vasily Romanov and Danyil Pronenko, both of whom recorded their best finishes in Formula Renault.

Matteo Ferrer took ninth from a struggling Matevos Isaakyan, who could only get a point from the race.

Simon Gachet was the most notable retirement, exiting the race after running in the top five.

Hubert and Aitken provisionally share the points lead after round one.