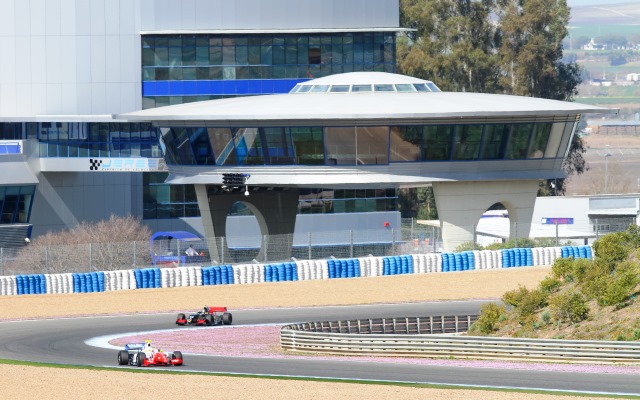 Frontrunners from GP3, Formula 3 and Formula Renault 2.0 will be in action in the first test of the rebranded Formula 3.5 V8 series at Jerez on Tuesday and Wednesday.

Eurocup runner-up Louis Deletraz – who made a one-off 3.5 debut at Spielberg earlier this year – will test for Fortec on both days.

Aitken’s place with the team on Wednesday will be taken by Gustav Malja, who finished ninth in the 2015 standings for Strakka, with which he will drive on Tuesday.

Strakka will run another FR2.0 contender Jake Hughes on both days. The Briton made his debut in the car with the team at the corresponding test 12 months ago.

Taking over from Malja at Strakka will be FIA Formula 3 European Championship race winner George Russell, whose first day in the 3.5-litre car will come with Tech 1 Racing, the squad with which he took a Eurocup victory as a guest one year ago.

Tech 1 will run 2015 regular Aurelien Panis on both days, with a second driver yet for Wednesday yet to be confirmed.

Two-time winner Egor Orudzhev will stick with Arden for both days, with FR2.0 graduate Kevin Jorg in the sister car on Tuesday before Aitken takes over.

Jorg will switch to the Lotus-branded Charouz squad for Wednesday. The team that ran Matthieu Vaxiviere to second place this year has only nominated one driver for each day so far, with ex-Auto GP and current Renault Sport Trophy racer Richard Gonda with the team on Tuesday.

Vaxiviere will be the one driver testing with the new Spirit of Race squad, which has taken over from Draco.

Orudzhev is one of four drivers backed by SMP Racing that will be in action. Two of them will be at Carlin: Nikita Zlobin, who contested the last two rounds of the season for Pons, and 16-year-old Vladimir Atoev, who finished second in SMP Formula 4.

Alfonso Celis is set to remain in the series with AVF next year and tests alongside his ART GP3 team-mate Marvin Kirchhofer.

Kirchhofer did a day’s running in the car at Aragon last year for Comtec Racing, and the British squad will be returning to action at the rest after its only race appearance of 2015 was running Deletraz at Spielberg.

Teo Martin Motorsport, which announced a deal to take over from DAMS in the series on Monday, is not yet expected to feature in the test.