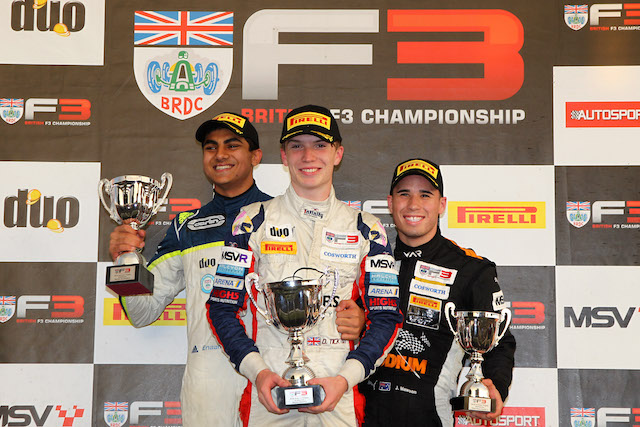 Former junior kart world champion Ahmed came out on top of an ultra-close qualifying session, where 10 of the 12 drivers were within six-and-a-half tenths of pole and a number challenged for top spot.

Ahmed edged out Ticktum by half a tenth and was able to lead comfortably off the line as his rival made a slow getaway to his first race in the championship’s Tatuus-Cosworth.

ADAC Formula 4 champion?Joey Mawson?climbed from third to second off the start, but Ahmed was able to open up a 2.7-second gap in the early stages.

As the race wore on, Douglas Motorsport’s Mawson cut the difference to only just over a second, but Ahmed responded to eek out a few more tenths over the closing laps.

Ticktum, driving for the Double R team that took Matheus Leist to this year’s title, dropped to fourth on the first lap behind a fast-starting?James Pull, who leapt from sixth on the grid for Carlin, but regained the place on lap three and set the fastest lap to secure race-two pole.

He made a much better start to race two, and led by nearly?three seconds at the end of lap one. He finished up 3.8 seconds clear to take a win on his second weekend of racing since completing a one-year ban.

Mawson this time didn’t get away well from second, enabling Ahmed to take the place. He held it to the end under pressure from the Australian to hold a five-point advantage over Ticktum overnight in the two-day Autumn Trophy.

Having posted the best time of Thursday and Friday’s on-track running, Double R’s?Marcus Armstrong?qualified eighth and finished seventh in race one, but lapped quick enough to line up fourth for race two and finished within a second of Mawson.