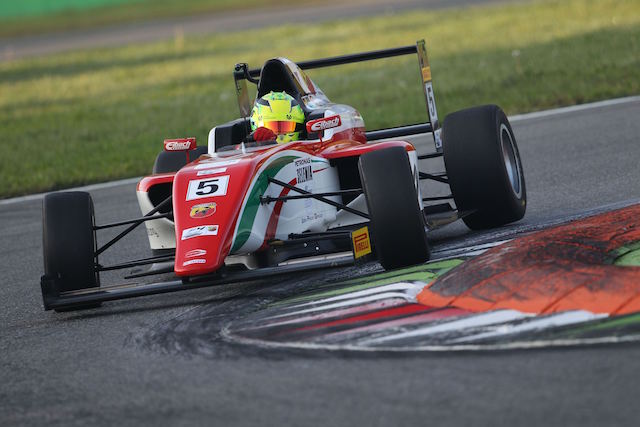 Mick Schumacher?annihilated the Italian Formula 4 field in the first race of the Monza finale, but rival?Marcos Siebert charged from 11th to second to minimise?the damage to his points lead.

Schumacher comes into the final round with a 25-point deficit, but seemed to be on his way to taking a large chunk out of that when he surged into the lead from third on the grid at the start, with his rival starting down in 11th on the grid after struggling with traffic in qualifying.

However, as Schumacher ran away from the field, Siebert seared through the order, climbing?up into second place by the start of lap six with a pass on?Lorenzo Colombo.

By this point, Schumacher was 10 seconds further up the road, having been given the chance to break free by the intense scraps behind him, including surprise polesitter?Sebastian Fernandez?being pushed into the gravel at Lesmo for the first time.

He finished up 11.3s clear of Siebert?to reduce the Argentine’s lead to 18 points. Should Siebert score in both remaining races, he will have to drop his two worst scores from the season – currently equating to six points.

Raul Guzman, the man third in the standings, made similar progress to Siebert to finish in third place, but he is now 39 points behind Siebert with 38 available from the last two races.

From 15th on the grid,?Yan Leon Shlom?moved up into fourth place past?Yifei Ye?and?Lorenzo Colombo at the start of lap 10, but Colombo – who ran second early on – fought back to get fourth on the 16th and final tour.

Fresh from a good Formula Renault test debut at the start of the week, French champion Ye completed the top six ahead of Siebert’s Jenzer team-mate?Job van Uitert, who went from 20th to seventh.