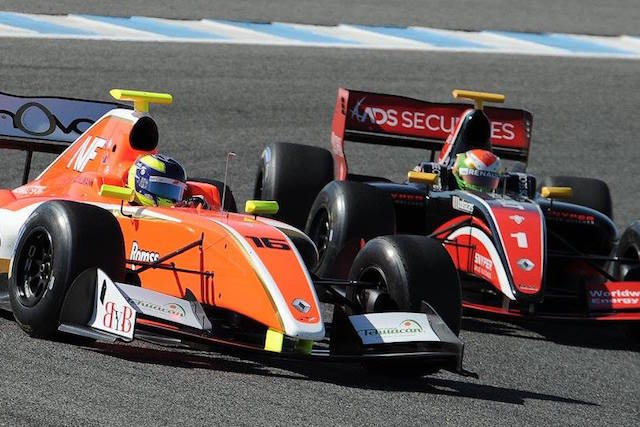 Louis Deletraz has been stripped of?the points he gained on Formula V8 3.5 title rival?Tom Dillmann?after the collision between the pair in race one at Jerez.

Deletraz fell behind Dillmann on the first lap of the race and spent 25 minutes close behind his rival, who was struggling to keep up with the cars ahead on the twisty Spanish circuit.

On lap 17 he dived to the inside at Turn 9 and the pair made contact, with Dillmann being spun into the gravel and into retirement.

Deletraz gained fourth position and finished the race there, provisionally scoring?12 points and moving one point ahead of Dillmann at the top of the standings.

However, stewards later handed him a 10-second penalty for the contact, enough to relegate him outside the points and last among the finishers after the safety car for the collision bunched the field up.

That restores Dillmann’s 11-point advantage over the Renault-supported rookie with three races remaining.

“I honestly think the penalty is a joke,” said Deletraz in a video posted to the championship’s Facebook page. “I do not accept it.

“There is a clear rule that as soon as you have part of your car next to the other one, you need to give space. I was half-a-car next to him, he turned on me, we had?contact.

“I don’t accept this penalty but that’s like it is, now we look forward. We deserve to win this championship and we will do everything we can to win it. I’m really more motivated than before.”

Much of Dillmann’s complaint with Deletraz centered around the respect of?yellow flags at the preceding corner, rather than the contact that followed.

“There was a yellow flag in Turn 8, with a crane in the gravel,” said Dillmann.

“You have to slow for the yellow flag, which in my opinion, Louis didn’t do, because I had a gap before Turn 8 which he completely closed. On the exit of Turn 8 he was in my gearbox.

“After that he went for a move which was a bit optimistic, because I was already turning and he touched my rear?with his front. That ended my race. I think the penalty was fair. It’s a shame because both of us lost points to the others in that race.”