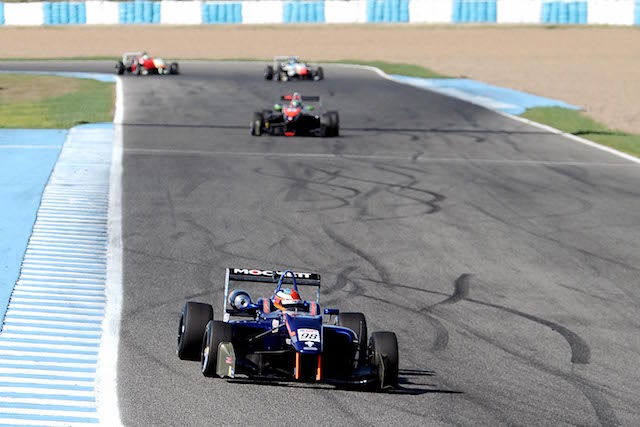 Colton Herta claimed a dominant third win of the Euroformula Open season in race one at Jerez while?Leonardo Pulcini?fought his way through to second to put?one hand on the title.

After qualifying on pole, Herta broke into a clear lead at the start as?Damiano Fioravanti got away slowly from second but fended off Pulcini, who then had debutant?Harrison Scott come down?his outside at Turn 1 for third.

After several attempts, Campos Racing’s Pulcini eventually got by the Teo Martin-run car of Scott around the outside of Turns 3 and 4 on lap eight.

Three laps from the end he took second away from Fioravanti at Curva Dry Sac, but he finished 7.5 seconds behind Herta.

With Habsburg finishing seventh, behind Scott (a non-scoring guest driver),?Diego Menchaca and Tatiana Calderon, Pulcini’s lead is now up to 76 points with 81 available from the last three races.

Habsburg was followed by his two fellow Macau Grand Prix-entered drivers Keyvan Andres and?Hong Li Ye. The?German?driver got?ahead in an opening-lap side-by-side scrap with the Chinese racer, but a one-second penalty for abusing track limits demoted him at the finish.