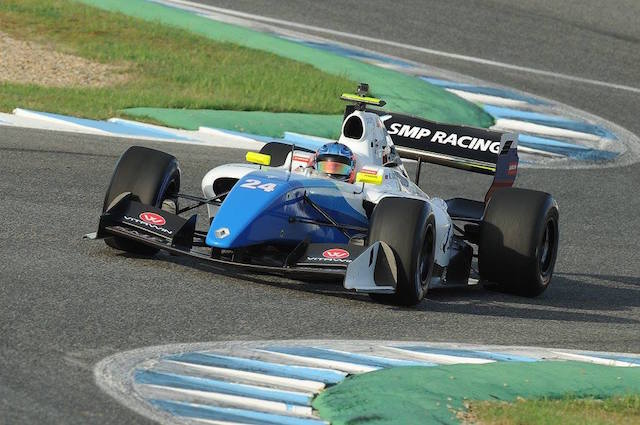 GP3 regular?Jack Aitken had claimed pole position on his series debut with RP Motorsport but bogged down off the line and fell to the back, with?Vaxiviere?sweeping into the lead from third on the grid past front-row man Isaakyan.

This allowed Dillmann to pass Deletraz at Turn 4 for fourth, but the AVF man couldn’t keep pace with the trio of SMP-liveried cars ahead.

Deletraz spent?half an hour up behind Dillmann and eventually made a bid for the place at Turn 5 but made contact with his rival, sending Dillmann into the gravel trap.

This brought out the safety car, and Vaxiviere made an error on the first lap after the restart, running deep and through the gravel at the Senna chicane.

Isaakyan passed?the Frenchman around the outside on the exit of the chicane, with Orudzhev and Deletraz also following him through before Vaxiviere reclaimed third at the start of the following lap.

Eighteen-year-old Isaakyan – who finished on the podium on his last FV8 start?at the Red Bull Ring?- was pushed hard to the finish by Orudzhev but managed to hold on by half a second.

Vaxiviere completed the podium ahead of Deletraz, whose 12 points for fourth provisionally move him one point ahead of Dillmann in the title race, but he was under investigation for the collision between the two.

Three-time winner?Roy Nissany?finished back in ninth after qualifying 13th, with?Pietro Fittipaldi?10th ahead of Aitken, whose pole start was?under appeal after an alleged technical infringement regarding the bodywork on his car in qualifying.

Australian?Thomas Randle spun out of his debut race – and Comtec’s return – in the early laps, although he was ahead of Aitken at the time.