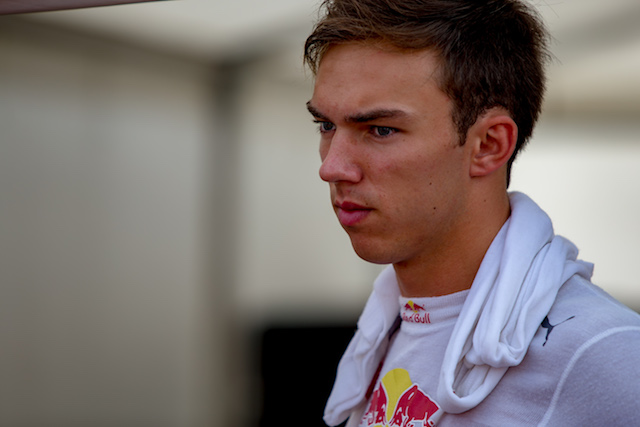 Pierre Gasly doesn?t understand why Daniil Kvyat will race for Toro Rosso again next season instead of him.?Neither do many others.

But I don?t understand what?s so hard to understand.

OK, I cannot know exactly why Helmut Marko has made this decision. Cynics say it is entirely commercially-driven, based on Kvyat?s nationality, but there is plenty of evidence around to support it being a decision based wholly?on merit.

I know, it?s a little odd for me to be doing down a top junior single-seater driver?s right to a Formula 1 seat and to favour the incumbent.

In Kvyat though we don?t have some old has-been who?s past his best, no longer deserving of a chance. For one, the guy is 22. Secondly, he went from his last race in Formula Renault 2.0 machinery (21 October 2012) to being signed to a Red Bull Racing seat (4 October 2014) inside less than 24 months. So either Red Bull was rash in giving a driver successive promotions that he was not ready for, or he has serious potential that just needs time to be fulfilled. Either way, to be disregarding young talent in this way would give F1 some serious questions to answer.

There is no denying that Kvyat has had his difficult moments. If there was some super-talent from another galaxy that unequivocally deserved his?seat ? like there was just prior to the Spanish Grand Prix ? he would have to make way. But there isn?t.

I am not saying that Gasly is not good enough to be in F1. After all, next month, he could well be GP2 champion. In fact, I think he probably?will?be GP2 champion. The seven-point deficit to Prema team-mate Antonio Giovinazzi should be easy for Gasly to eliminate by the end of the feature race in Abu Dhabi, a place where he is historically devastatingly quick. 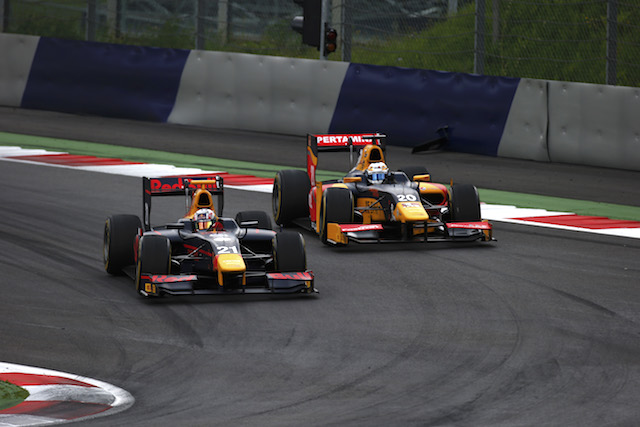 Yes, Red Bull could have waited to see whether he will claim the biggest achievement you can obtain below F1. Yet whatever happens in Abu Dhabi, he will have made things so unnecessarily hard for himself. That the decision is already made is proof of that.

Gasly was infuriated by what unfolded at Monza, where he lost a sure-fire feature race win to Giovinazzi after a bungled safety car period. He had every right to be upset ? though a more measured reaction to things happening out of his control would have demonstrated some maturity.

The truth is however that far more damage was done both to his points tally and his reputation with errors early in the season. These were particularly notable in the context of a driver who had not yet won a race in more than two full seasons as a Red Bull Junior.

Given the brutal nature of the Junior Team, Gasly could consider himself fortunate to still have a place on the scheme into 2016, and even more so after a messy start to the season. Letting the win slip in the opening race at Barcelona would have been forgivable. Maybe the disastrous weekend in Monaco was too ? after all, Max Verstappen didn?t fare any better there. But gifting Giovinazzi the win on the last lap of the Baku sprint race, followed by spinning out of the lead at the Red Bull Ring (that?s the Red Bull Ring) was a pretty embarrassing sequence of events for a man who already had such a glaring barren run.

Gasly was fortunate that none of his expected rivals had threaded results together either, but he went on to win three of the next five feature races, and was unlucky to drop points in the other two. Undoubtedly, he did an impressive job to overcome whatever mental hurdles he had.

This was not some sudden miracle though. The only miracle is how Prema became such a dominant force in its first year in GP2, providing Gasly with a car good enough to win as long as he avoided mistakes. Contrast that with Kvyat, who has had to overcome his own difficulties while in a car that is harder to drive than what he had before, and where he can put in the perfect race and nobody would notice. 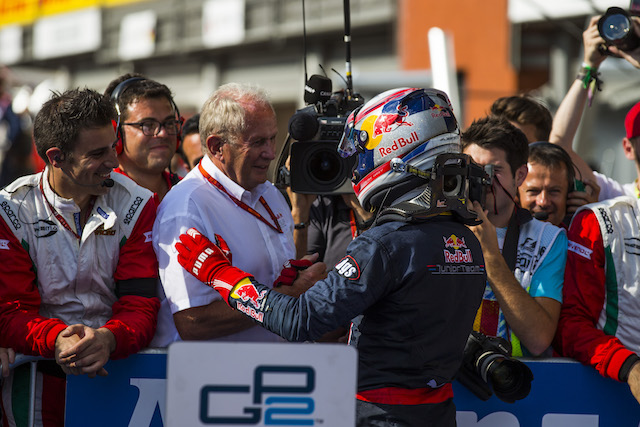 As has been statistically proven at all of the last three rounds, if you?re driving a Prema-fettled car, you should be on the front row. In this scenario, Gasly only has to see off his rookie team-mate, yet that?s been a close-run thing. At Spa, he was a tenth and a half slower. At Monza, he was half a tenth quicker (before Giovinazzi was excluded for a tyre pressure infringement). In Malaysia, he was eight hundredths quicker.

Sometimes the races have swung in his favour. Sometimes they haven?t. The net result is he goes into the deciding round with ground to make up. Pre-season, such a scenario wouldn?t have been a surprise, but Prema has been dominant and Gasly has not. He?s been the one making mistakes, not Giovinazzi.

The common reaction to Kvyat?s retention has been that ?it?s not what Red Bull does?. Red Bull will always promote ?the next guy?, it?s been said. But the fact is ? at least in more recent times ? that Red Bull has only ever promoted a ?next guy? that has done the business in whichever series they were placed. Standards in the Junior Team are increasingly high, and promoting somebody that has not entirely met expectations would suggest that merely being ?good? was good enough.

Daniel Ricciardo, Jean-Eric Vergne, Kvyat, Verstappen and Carlos Sainz had all met or exceeded expectations just prior to reaching F1. When Antonio Felix da Costa failed to do so in Formula Renault 3.5 in 2013 ? firmly shaded by Kevin Magnussen and Stoffel Vandoorne ? he wasn?t promoted, to the surprise of many.

With Gasly, it?s not as if he?s just having one imperfect season, that when combined with his previous record would still warrant a promotion. Red Bull was right to hire him when he won the Eurocup title in 2013, but he hasn?t regularly proven that potential. On his day this year he?s been great, but he?s not been good enough over a whole season ? even if he leaves Abu Dhabi as champion.

If there was an open vacancy at Toro Rosso, there would be no debate as to whether Gasly deserved it or not. From some of the comments he made in recent months, it seemed he believed there already was a vacancy. I?m not talking about the fuss that blew up at Monza, where he seemingly was misquoted, but he was talking openly about wanting to race in F1 as soon as possible, in Kvyat?s seat. As Marko went on to make clear, there was no chance of this happening in 2016.

In football, this would be like the manager of the leading Championship side declaring in March that he wanted to take the job of a struggling Premier League counterpart who hadn?t yet been sacked. We expect leading GP2 drivers to talk up their chances of a future in F1, but somebody in Gasly?s position ought to concentrate on completing the job in hand rather than discuss their desire to usurp a struggling colleague.

Ultimately, Marko is not afraid to get ruthless ? towards either driver. He has more data on Gasly than anyone else: on how he?s really performing in GP2, how fast he is in an F1 car, what his engineering feedback is like and how he stacks up mentally. And Marko will know how all that compares to Kvyat. Even without the data, to this outside observer at least, it?s a decision that makes sense. It would be naive to completely rule out commercial considerations, but there are plenty of other reasonable explanations.

Some might accuse me of double standards for saying Kvyat deserves another chance at the same time as knocking Gasly for an imperfect season. But I?m not writing Gasly off. Far from it. If Red Bull believes he has the talent to play a part in its future ? and every suggestion appears to be that it does indeed believe that ? then he deserves to be kept on. In 12 months’ time, it?may be irrefutable that Kvyat is not up to the job, and that Gasly would be the better bet.

Gasly is rapid, and if he becomes GP2 champion next month he will deserve a place in F1 in 2017. It just won?t be in one of the four Red Bull seats, because right now, where is the evidence that he?s better than Kvyat? 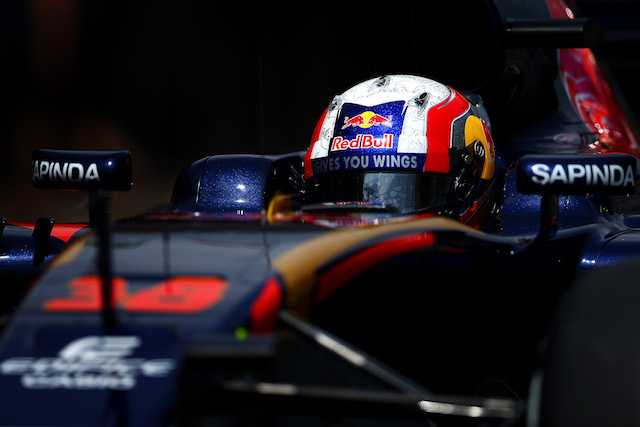